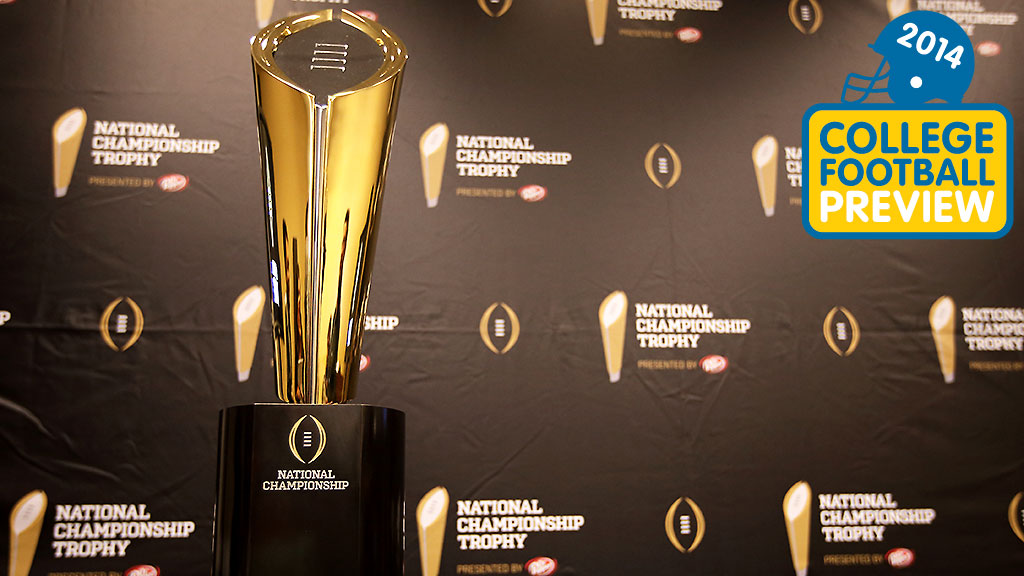 Amid NCAA-mandated roster turnover, a rapidly spinning coaching carousel, and the ever-shifting sands of conference realignment, the advent of a new college football season is always a whole new ballgame. By throwing in a new postseason system for the 2014 campaign, the sport’s overlords have hit the Frappe button to ensure maximum disorientation. We’re here to help.

• Where am I? Gentle sports fan, it’s July 28, and if you think about it just right, that puts us less than a month out from the start of FBS ball. How do you figure? Week 1 of the 2014 slate features a curious phenomenon more typically seen in the waning weeks of the season: A Wednesday-night football game! You mean Abilene Christian at Georgia State? That counts! [Blank stare] … GEORGIA STATE IS IN THE SUN BELT. IT COUNTS. Come on down to Atlanta and pregame for your pregaming. We’ll tailgate like gods, 24 hours earlier than the gods perhaps originally intended.

• What’s my team’s super-objective this year? The era of jockeying for position in the BCS standings is at an end. Starting this season, teams will transition from being held captive by convoluted math to being judged directly by a selection committee tasked with populating the new four-team College Football Playoff, a thing we still have to think twice about to remember to capitalize.

• How will this playoff contraption operate? The committee will place its four chosen teams into two elimination games, which will rotate among six sites: the Cotton, Fiesta, Orange, Peach, Rose, and Sugar Bowls. The two winners will then face off at a non-bowl site. In the Playoff’s inaugural campaign, the Rose and Sugar will serve as the semifinal sites, while Arlington, Texas’s JerryDome will host the title game on January 12. As a result, the New Year’s Eve and Day slates have been thinned out in number and plumped up with prestige: Only the playoff bowls, the Capital One Bowl, and the Outback Bowl will boast December 31 and January 1 kickoffs.

• When will we get to see this alleged committee’s rankings? The committee is scheduled to release its first Top 25 on Tuesday, October 28, with future rankings coming on future Tuesdays. What does this committee’s idea of “best team” even mean? Good question! We’ll all find out together.

• How will this new system affect my ability to holler about my team being “robbed”? Not a bit! Humans are fallible! The humans who made the computer polls were fallible, too, but the humans on the committee have famous, recognizable faces! You’ll be fine. Who are these humans? The 13-member selection committee includes active athletic directors from around the country as well as current and former college football luminaries. How much time are these people going to spend watching film and actually learning about the teams? This might be the element of the postseason we’re personally most interested in following; we can’t speak to the daily free-time allocations of guys like Archie Manning, but those active athletic directors can’t have many leisure hours, and while Condi Rice’s lofty position at Stanford doubtless comes with many perks, a time-turner is not likely to be one of them. 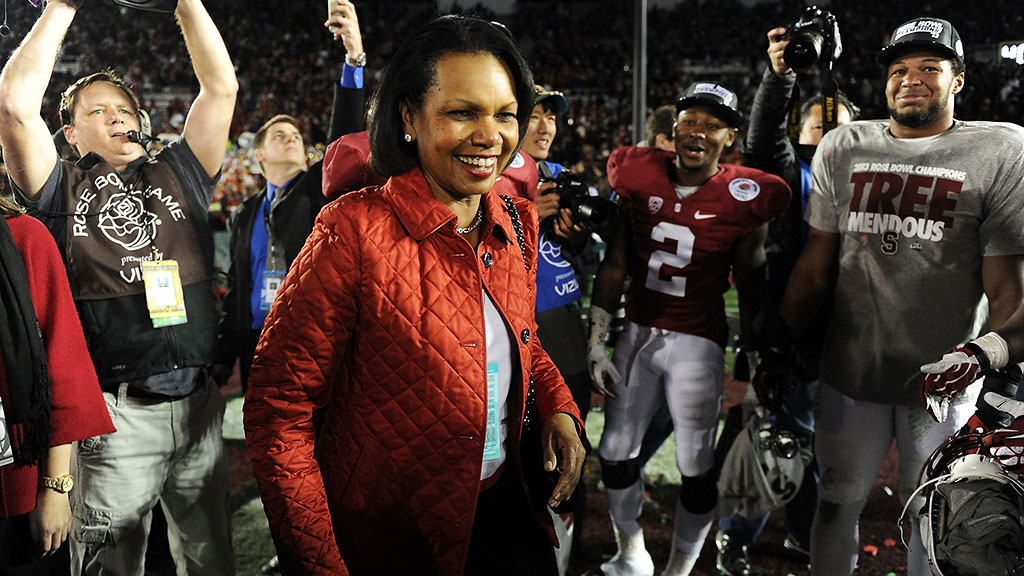 • So how many slots in this thing are reserved for SEC teams? We honestly don’t expect to see much hollering about playoff berths going to two teams from the same league very often, except in the immediate orbit of the team that loses the SEC championship game (and maybe in the Pac-12, the way that league is going). If you’d like to imagine how this system might have worked in years past, here’s a good read from Bill Connelly, who parsed through the top BCS-era teams. If there’s an apt summation of what we really expect to happen, though, it’s this:

• What else is new? The trophy at the end of this quadfurcated rainbow, for one thing. Bill Hancock has called it “priceless,” so it’s a good thing it looks a sight less breakable than its predecessor, the crystal football. I like and miss the crystal football. Fear not, sort of: It’s going to stick around as the award for the top-ranked team in the final coaches’ poll, but it’ll have “Amway” slapped on it.

• I have lost track; is my team still in the same conference it played in last year? Probably! Joining new leagues this season are:

• And is my team’s coach still its coach? Most likely! A handful of power-program hires and a flurry of mid-major shufflings characterized this offseason’s carousel action. Presiding over first-year regimes this season are: 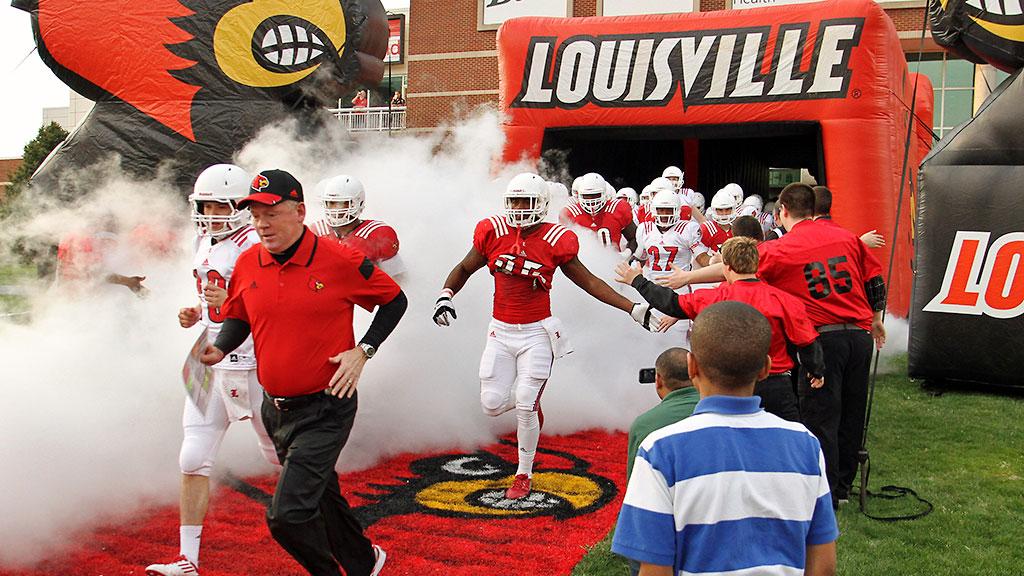 • Where am I? I mean that in a very real, physical sense. Should you find your team playing a home game in an unfamiliar set of surroundings, it’s likely you are in one of three brand-new stadiums:

TDECU Stadium (Houston): It’s got 40,000ish seats and synthetic turf, and is “designed to showcase the Houston skyline.”

McLane Stadium (Baylor): This venue will create major college football’s third sailgating opportunity (along with Tennessee and Washington), an experience every fan should sample at least once. (You haven’t lived until you’ve seen a grown man dive into a green river to retrieve and eat a dropped hot dog. Or rather, you haven’t died.)

• I am lost, both spatially and temporally. You might have wandered into one of the several new postseason college football contests set to launch independent of the Playoff: the Raycom Media Camellia Bowl (in Montgomery on December 20), the Miami Beach Bowl (Marlins Park, December 22), the Boca Raton Bowl (FAU Stadium, December 23), or the Bahamas Bowl (Nassau, Christmas Eve). We can get a bowl in the Bahamas but must operate for yet another year without new a postseason contest sponsored by a pizza chain? The world is an imperfect place run by people who do not always seem to be trying their best, and our quixotic quest for more pizza-based postseason football contests soldiers ever onward.

The Adventures of Roger Goodell: Defender of Women