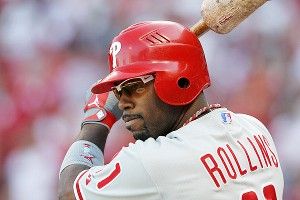 A rare personal interjection in this preview series, if you’ll indulge me.

One of my annual rites of spring is to bet a few gummi bears on over/unders for MLB team win totals. Coming into last spring, I was 5-0 lifetime. Made two gummi wagers, one on the Rays over 84.5 wins (make it 6-0) and one on the Phillies under 97 wins. As I wrote at the time:

Another one of my favorite betting principles: Never bet on extremes. It’s really tough to win 100 games, or lose 100 games. Players, teams, and phenomena tend to gravitate toward the center, influenced by what Bill James calls the Whirlpool Principle.

We needn’t rely exclusively on fancy statistical theories for this one, though. The Phillies lost a five-win player in Jayson Werth. The latest on Chase Utley has the Phillies pondering ways to avoid surgery for a player who’s been top five in the game when at full strength. Domonic Brown broke a bone in his hand. The bullpen’s still a question mark. Jimmy Rollins’s MVP season seems like forever ago. Ryan Howard is still the same beastly power hitter who’s highly vulnerable late in games against lefties and struggles defensively.

Even with one of the best starting rotations in a generation, there are too many risks here to assume an extreme season. The Phillies should still be considered (slight) favorites to win the NL East. But I’m not buying 98 or more wins.

Losing Werth’s five-win performance hurt. Utley didn’t play enough, nor well enough, to be anywhere near the MVP candidate he used to be. Howard’s weaknesses were on display as expected. And they still cruised past 97 wins, winning 102 (with an expected total of 103 based on runs scored and runs allowed). Turns out the Phillies had a ton of quality on the roster beyond their big-name players. Also, having three of the 15 best pitchers on the planet on the same staff might be an even bigger deal than you’d think.

Ruben Amaro Jr. has stripped the farm system to build a veteran team capable of winning the World Series. They might falter at some point. Trying to guess when that’ll happen might be a fool’s errand.

If you’ve ever read anything to do with advanced stats, you probably know that Ryan Howard is overrated, his annually attractive home run and RBI totals obscuring the flaws in his game (struggles against lefties, lousy defense, lousy base running). But overrated doesn’t mean without value — the Phillies won’t be as strong with Wigginton, Mayberry, and Jim Thome playing first as they will when Howard returns from the Achilles injury that might cost him half the season. Everyone in the projected lineup is on the wrong side of 30 except Pence and Mayberry, making pullbacks in performance more likely than notable improvements. The Phillies’ best position player at this stage might be Shane Victorino, author of a near six-win season in 2011; getting 150-plus games from him would be a huge boost, though he’s only managed that feat twice in his career. Don’t be surprised if the Phillies look for a long-term solution at third base some time soon. Polanco turns 37 this year, and his stellar defense is partially offset by his declining bat (.304 wOBA last year) and mounting injuries (missed 40 games).

Being able to count on nearly 700 innings of near-3.00 FIP starting pitching is a gigantic advantage that makes the Phillies instant contenders in any season, regardless of the state of their lineup. One of the big three, Cole Hamels, enters a potential walk year with an eye on a nine-figure contract. No surprise then that Amaro is exploring trade possibilities to free up some cash, starting with Joe Blanton’s name getting linked to Toronto and other clubs this spring. The Phils could then slot Kyle Kendrick in as their fifth starter, or if finding more Hamels money isn’t a major concern, they could even look into re-signing Roy Oswalt. With Vance Worley’s emergence last year as a seemingly capable fourth starter (strikeout rate of better than 8 Ks per nine innings), Philly could get by with a merely functional SP5 if need be. The additional of Jonathan Papelbon at closer, overpriced though it may have been, offers a lefty-righty combination that should be as strong or better than last year’s eighth-ninth-inning combo of Antonio Bastardo and Ryan Madson. Run prevention should be the Phillies’ forte, and the departure of defensive butcher Raul Ibanez can’t help but improve the club in that department.

BREAKOUT PICK
Mayberry, if only because … who else would it be? The now-28-year-old righty swinger made a splash in his brush with semiregular playing time last year, clubbing 15 homers in less than 300 plate appearances, with a .369 wOBA. We might see a bit of a playing-time logjam with Wigginton, Mayberry, and Laynce Nix battling for playing time at two positions, and that’s before Howard comes back. But if Mayberry finds his way to 500 plate appearances, he could produce some impressive power numbers.

IF EVERYTHING BREAKS RIGHT
The Phillies head back to the postseason knowing Halladay, Lee, and Hamels will be a tough out for any team. Of course that’s what they must have thought last year after a 102-win season, and the Cardinals bounced them in the first round. This is an imperfect roster, and Amaro might need to address one or two positions and find better bridge arms to Bastardo and Papelbon for the Phillies to be set for playoff battles.

IF EVERYTHING GOES WRONG
The Braves, Marlins, and Nationals all rise up and threaten the Phillies’ NL East hegemony, forcing a frantic wild card chase to sneak back into October. Howard’s injury remains a big unknown, and the team’s aging lineup remains a concern. Three aces solve a hell of a lot of problems, but there is some broader downside here.