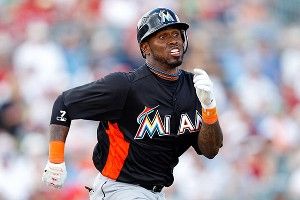 Three out of four ain’t bad. Though Miami came up short in its quest to land Pujols, the additions of Reyes, Mark Buehrle, and Heath Bell should boost the fortunes of a team that already had big potential for improvement. The prospect of a healthy Josh Johnson, an ever-improving Mike (now Giancarlo) Stanton, and a big dose of positive regression for Hanley Ramirez already portended good things for the Marlins. With three-fourths of Philly’s starting infield on the shelf and the Braves mostly standing pat, the door has swung open for the Marlins (and Nationals) to challenge for the NL East crown.

Reyes got less than half the cash and much less than half the attention that Pujols did when he bolted St. Louis for the Angels. Which is interesting, because Reyes had a 2011 WAR of 6.2 while Pujols was only at 5.1. One more fact: Reyes is 28 and Pujols is 32.

Commence piling on the caveats … now. Reyes’s numbers were buoyed by a career-high .353 batting average on balls in play, a number likely to regress this season. He missed 36 games, which bodes well in that greater health could net even greater value, but also bodes poorly in that it marked the third straight season he missed significant time due to injuries, including 126 games on the shelf in 2009. This was also just the third time that Reyes produced six or more wins above replacement for his team. Meanwhile, Pujols’s 2011 season was the worst of his career. The temptation is to say that Reyes is in his prime and Pujols has started his decline, especially given the three-and-a-half-year age difference between the two. But career paths are rarely that predictable, and Pujols has been the vastly superior player for most of the two players’ careers.

Either way, all of this highlights how Reyes might turn out to be the best big-ticket signing of the offseason, given the relative size of his contract vs. Pujols’s and Fielder’s deals, and the profiles of each player (Pujols is the oldest, Fielder is a defensive minus playing a non-premium position, etc.). After Reyes, the Marlins would do well to drop Bonifacio toward the bottom of the lineup and get more at-bats for Stanton (an excellent sleeper MVP pick assuming his current knee injury proves to be minor) and yes, Ramirez too. Foot, back, and shoulder injuries killed Hanley’s 2011 season, and both his offensive and defensive value were already waning in 2010, even though he’s actually six months younger than Reyes. But there’s a .300-hitter infielder with power still lurking in this skill set, and the tarot card readers have speculated that Ramirez could thrive again with Ozzie Guillen taking over as the new manager. Combine those three potential stars with solid complementary pieces like Morrison and Sanchez and you have a team that could make a huge jump from last year’s 23rd-ranked offense.

Those are some pretty damn optimistic projections. Johnson made just nine starts last year before missing the rest of the season with a shoulder injury. Nolasco’s fielding-independent stats have always been solid (career 3.83 FIP), but it’s easy to wonder if his inability to prevent runs might go beyond simple bad luck. And Zambrano … he’s been a bit of a mess. Still, you could see the bright side too: Johnson was a monster in 2009 and 2010, making 61 starts and yielding nearly 12 WAR over that stretch; Nolasco’s been crushed by very low strand rates in two of the past three years (61 percent in 2009, 66.2 percent in 2011; league average is in the low-70s), meaning unless he’s got a fatal flaw when pitching from the stretch, bad luck (and lousy relief) might’ve been all that was holding him back (though his diving strikeout rate is a concern); and Zambrano … even if he can’t rebound to anywhere close to his old ace form, the Marlins just need a decent fifth starter’s performance out of him.

The addition of Bell, overrated due to Petco deflation and vulnerable to lefties though he may be, should help the bullpen preserve leads and also allow Guillen to yank pitchers early when needed. Reyes has seen his defense dip in the past couple years, but he figures to gobble up more grounders than the now-too-big-for-short Ramirez, which should help last year’s middle-of-the-pack team D. Plus the Marlins now have the cash and more importantly the will to open their checkbooks, meaning they’d likely make a move or three if any of the projected starters falter.

BREAKOUT PICK
Morrison. Stanton is the team’s best young player, but it’s tough to call a breakout for a player who’s already bashed 34 homers in a season (though 40 is very much within reach). Meanwhile, Morrison has shown a good batting eye (career 11.7 percent walk rate), hit 23 homers in just 123 games last year, and could be poised for a batting average surge after posting a low .265 BABIP in 2011. He could make a big leap in 2012.

IF EVERYTHING BREAKS RIGHT
Reyes leads a massive offensive improvement, Johnson returns to Cy Young-caliber form, the aging and injury-wracked Phillies lose their iron grip on the division, and the Fish win the East. We’re still three years and one league switch away from a Back to the Future prophecy, though.

IF EVERYTHING GOES WRONG
Even in a worst-case scenario, the addition of a second wild card and a lack of dominant teams in the National League (PECOTA doesn’t see a single 90-win team) puts the Marlins in the mix, even if Ramirez’s slide continues and the starting pitching isn’t as strong as hoped.