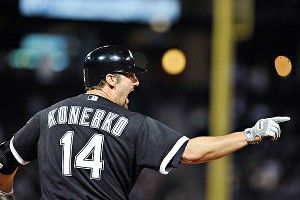 Robin Ventura had his doubts when Kenny Williams first approached him about the White Sox managing job this offseason. He liked serving as an advisor for the Sox without being there every day, liked keeping his hands in the game without wringing them over the stress of being too close. Williams eventually convinced Ventura that his first major league managing job would be a gratifying one. Considering the Pale Hose head into this season with one of the worst lineups in baseball and a farm system that’s dead last by a mile, Williams won’t come anywhere near this season’s Executive of the Year honors. Just Salesman of the Year.

It didn’t have to be this way. Dunn had cranked 282 homers over the previous seven seasons when Williams gave him a four-year, $56 million contract; then Dunn hit a buck-fifty-nine with 11 homers. Alex Rios was coming off three big seasons in a row before Williams scooped him off waivers during an off year; he played well in 2010, then collapsed last season. Gordon Beckham was the eighth overall pick of the 2008 draft, then posted a strong .351 wOBA with the White Sox the next season, finishing fifth in Rookie of the Year balloting; that number plunged to a hideous .284 last year. Between big signings gone wrong and stalled prospects, the White Sox offense is in far worse shape than it could have been, and maybe should have been.

The White Sox aren’t going to be terrible this year, and that’s thanks entirely to the pitching staff. Neither Floyd nor Danks qualifies as a number-one starter on a championship team, but they’re both above-average pitchers who’ve pitched bulk innings in each of the past four seasons. Humber got his first crack at a regular starting job last season and was outstanding, posting a strikeout-to-walk rate of nearly 3-to-1. Sale is one of four dynamic, young relief pitchers making the leap to major league rotations this season, with the dynamic arm and pedigree to succeed. Peavy’s missed half the season in each of the past three years, but he’s been good to very good when he’s managed to stay upright. The back of the bullpen’s very strong too, with fire-breathing rookie Addison Reed poised to seize the closer job and Matt Thornton one of the top lefty relievers in the game. All this after chucking Dan Hudson overboard two years ago for an Edwin Jackson rental.

BREAKOUT PICK
Sale. The soon-to-be-23-year-old lefty was converted to relief immediately after being drafted to get him to the big leagues quicker. But the White Sox wisely realized that keeping him in the pen would be a waste, given his mid-90s fastball and dominance as a starter as an amateur. Converting a reliever to the rotation — even a reliever with a history of starting — is as much art as science, with teams forced to consider everything from the pitcher’s demeanor to his stamina to his assortment of pitches. Armed with a great slider and effective changeup to go with his heat, Sale’s got the repertoire part down, so this is a bit of a hunch bet on everything else.

IF EVERYTHING BREAKS RIGHT
Last week, Lewie Pollis of Beyond the Box Score wrote an interesting piece, trying to guess who might be the next Jose Bautista. In the previous three seasons, he’d found an interesting pattern: When an out-of-nowhere player suddenly hits a very high percentage of his flyballs for home runs in the final month of the season, he carries those results forward to the next season and has a big breakout. Bautista in 2010 was the most dramatic of these three players, but Ben Zobrist in 2009 and Mike Morse in 2011 were strong examples too. In September 2011, the only hitter with a top-10 HR/FB rate who wasn’t already an established hitter, or at least one who people consider highly, was White Sox third baseman Brent Morel.

It’s an interesting projection. Morel was awful for the first five months of the season, hitting a meager .250/.271/.317 on August 31. Then he turned into a three-true-outcomes machine, hitting .224/.340/.553 in September, with eight homers, 15 walks, and 18 strikeouts over 103 plate appearances. One theory has Morel showing a better batting eye, which led to better pitches to hit, and thus his home run barrage. Maybe. Then again, Morel slugged .464 in 1,300-plus plate appearances as a minor leaguer. And while a streak of Zobrist-Bautista-Morse is pretty damn impressive, it’s still a small sample. More broadly, despite frequent speculation in baseball circles that second-half performance can portend a breakout the next year, we’ve yet to see a conclusive study on the issue. And then there’s this: home run-to-flyball rate can depend on multiple factors beyond a hitter’s control, from random statistical variance to the quality of an opposing pitcher. Here are the pitchers who surrendered homers to Morel last September: Brad Penny, David Huff, Frank Herrmann, Rick Porcello, David Pauley, Tim Collins, Chad Durbin, and Everett Teaford. In other words, Morel’s homer binge may well be the result of luck and a string of cream-puff pitchers.

But if the prophecy comes true and Morel does become the next Jose Bautista … well, that’s about as best-case as a best-case scenario could possibly be. (The White Sox still won’t win anything, even if that happens.)

IF EVERYTHING GOES WRONG
Dunn and Rios offer painful reminders of the $82 million they’re owed over the next three years, Beckham continues to struggle, Viciedo doesn’t hit as hoped, Peavy gets hurt again, and even the indomitable Paul Konerko finally starts to slow down at age 36. A last-place finish in year one of the Ventura era is a real possibility.