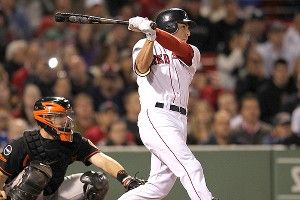 Then on Tuesday, I read Jayson Stark’s survey of five major league general managers, and their picks for teams with World Series potential. Twelve of MLB’s 30 clubs were unanimous picks to at least have a chance at winning the World Series. They are: Yankees, Rangers, Angels, Phillies, Tigers, Rays, Braves, Reds, Cardinals, Diamondbacks, Marlins, Nationals. Really? The Washington Nationals are unanimously regarded as a candidate to win the World Series … but the Red Sox are not?! Really?!?!

On August 31 of last season, the Red Sox owned the best record in the American League, with a 1½-game lead on the Yankees and a nine-game lead on the Rays. Then the evil fried chicken-and-beer monster ate Josh Beckett’s soul, and the Red Sox were unable to field a winning team. This is ridiculous. It’s unrealistic to expect the Red Sox to be the 100-plus-win juggernaut that annihilated the league from May through August. But it’s even more delusional to picture them as this group of headcases that’s too dysfunctional to have a chance. The Sox have an MVP-caliber center fielder in Jacoby Ellsbury, an MVP-caliber second baseman in Dustin Pedroia, a killer first baseman in Adrian Gonzalez, a slugger like David Ortiz who’d be the best position player on multiple other teams but merely a support guy in Boston, an excellent top three in the rotation, and a heavily reinforced bullpen to replace Jonathan Papelbon (free agent) and Daniel Bard (to the rotation).

We’ve overreacted, and I include myself in that group. This is still a loaded team that could easily win it all, even if they might have benefited from spending some money on a capable, veteran starter. Hell, just a year ago 33 out of 45 of us ESPN types thought the Sox would destroy all comers. It’s not like they’ve changed to cricket rules in the 12 months since.

This might be the best top five in baseball, even if Youkilis replicates the past-prime, injury-prone form he showed last year. Ellsbury’s a long shot to repeat last year’s .402 wOBA slugfest; ditto David Ortiz (.405 wOBA) as he enters his age-37 season. But other players offer upside: Crawford’s a risk as he tries to recover from offseason wrist surgery, but it’s hard not to envision some bounce-back after the worst season (.289 OBP, .304 wOBA) since his rookie year. Saltalamacchia and Sweeney both turn 27 this year, each offering some offensive upside given Salty’s power (.215 isolated slugging in 2011) and Sweeney’s on-base ability (.352 career OBP vs. righties). With Kelly Shoppach and Cody Ross brought in to mash lefties, there’s potential for cheap production at two of last season’s most disappointing positions. Giving away Marco Scutaro for nothing, especially after trading away Jed Lowrie, could still end up costing the Sox a game or two. But last season’s highest-scoring and fourth-best defensive team still has more than enough to lead the Sox back into the thick of a pennant race.

We’ll say it one more time, then let it lie: Given their massive annual profits, if the Sox were really so obsessed with their luxury tax number that they passed up potentially easy two-win upgrades in Edwin Jackson or Roy Oswalt, that’s tough to swallow. Especially given the fierce competition that awaits in the AL East and in the wild-card race. At least in Oswalt’s case, it could be that the right-hander’s back problems scared the Sox off, or that he wanted to pitch much closer to home than Boston (and he could still be a member of the Red Sox at some point anyway). At any rate, somewhere in there is a vote of confidence for Daniel Bard and Alfredo Aceves, the favorites for the no. 4 and no. 5 starter jobs who are both converting from bullpen roles. We discussed some of the challenges of that transition yesterday with Chris Sale; both Bard and Aceves were starters before, Aceves threw bulk innings as a long reliever last year, and Bard has the multi-pitch repertoire and big-time heat to make him an intriguing starter candidate. If Plan A doesn’t pan out, there’s always the hope that one or more of Carlos Silva, Aaron Cook, and Vicente Padilla pan out as veteran scrap-heap finds, the way Freddy Garcia and Bartolo Colon did last year for the Yankees. Still, with Buchholz’s health a growing concern and a mix of upside and uncertainty at SP4 and SP5, don’t be surprised if the Sox look to address the issue, later if not sooner.

BREAKOUT PICK
Bard. The last time the big right-hander manned the rotation, he made 17 starts at Single-A … and was horrific. Bard averaged fewer than four innings per start, walked nearly a batter an inning, and posted a 6.42 ERA. Much has changed since then. Bard overhauled his mechanics, honed his fastball-slider combination, and developed into a strikeout machine as a reliever. He’ll need to use his changeup more to keep lefty hitters honest and pitch deep into games. But on a team overloaded with veterans, Bard’s the best bet of a small group to take the next step this season.

IF EVERYTHING BREAKS RIGHT
The Red Sox win the World Series. No offense to Anonymous National League GM, but where’s the evidence that the Red Sox’s off-field problems will carry over to a new season with a new manager, with one incredibly unlikely collapse now behind them? Predicting the impact of intangibles is a fool’s errand; Boston’s got the talent to win it all, especially if Buchholz stays healthy and Bard can chip in 180 effective innings.

IF EVERYTHING GOES WRONG
The Sox win 90 games but still fall short of the playoffs, even with the addition of a second wild-card team. Assuming the Tigers are too much for the rest of the AL Central, at least one good-to-very-good team among the Yankees, Red Sox, Rays, Rangers, and Angels will miss the playoffs … and that’s not counting teams like the Jays and Indians, who have enough upside to at least contend.