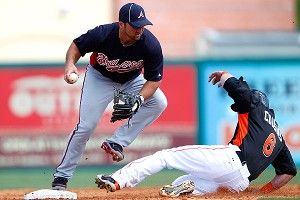 For the fourth time this offseason, it’s time to get (re)acquainted with the term, hara hachi bu:

In the Japanese prefecture of Okinawa, locals practice a special kind of diet. It’s called hara hachi bu, and it basically means they eat until they’re 80 percent full. Sounds both logical and awful, right? Okinawans eat less than people in Western societies, and also live longer. And forget 100 percent — we slam two helpings of turkey smothered in gravy, three plates of stuffing and sweet potatoes, and four kinds of pie every Thanksgiving, then feel like garbage afterward. But dammit, it tastes good, and it’s our right to stuff ourselves silly and destroy our health and waist lines. Hara hachi bu might make sense on paper, but it hasn’t caught on in most places.

The Braves are the Okinawans of Major League Baseball. Sure, plenty of teams run much lower payrolls and keep draft spending in check. But those teams do so because they’re poor by MLB standards. The Braves are not. They’re a mid-market team not far removed from one of the greatest runs of success any team has seen in half a century. But where previous owner Time Warner bankrolled one of the top payrolls in the game, Liberty Media has clamped down on spending, with the Braves ranking a modest 15th at $87 million last season. They could probably spend more money and still turn a profit. They choose not to. Meanwhile, the new collective bargaining agreement’s restrictions on draft spending should have zero effect on the Braves. They were one of very few teams that stuck to slot recommendations every year. In fact, Braves president John Schuerholz was a driving force behind the new spending caps and the penalties that result from going over those caps. The Braves continue to pump out great players, using superior scouting in the draft and on the international market to bring in new generations of exciting talent. But in a division that features a new, big-spending superpower in the Phillies, that hasn’t been enough.

That trend has continued this offseason. The Braves made no major moves, other than dumping Derek Lowe’s salary. At least they have plenty of pitching depth, both in the rotation and bullpen. But the offense could be in trouble, with the Braves adding zero pieces to a lineup that finished 22nd in runs scored last year. The improved Marlins and Nationals could pass the Braves as soon as this year. If that happens, blame Braves management for deciding 80 percent is good enough.

Heyward is the key to the Braves’ surpassing last year’s anemic output: A shoulder injury knocked Heyward’s wOBA down to .314, after he put up a stellar .376 mark in his rookie season. It’s not a stretch to say that a fully recovered Heyward, playing 150-plus games, could be worth four more wins to the Braves than he provided last season. Uggla could see a bounce-back too, after posting one of the ugliest first halves you’ll ever see last season before going on a hitting barrage. Keep an eye on Jones, who produced when healthy last season but has doled out plenty of gloom and doom talk this spring, suggesting his knee might not hold up and that the Braves might need to find an alternate source of offense at third base. Meanwhile, untested rookie shortstop Tyler Pastornicky has struggled this spring, so untested rookie Andrelton Simmons might get the starting job instead.

It’s here that the Braves’ cup runneth over. Even after Atlanta gifted Lowe to the Indians for salary relief, there was talk of swapping Jurrjens for a big bat, a deal that didn’t materialize because Jurrjens’ iffy peripherals and shaky health made teams as antsy. (Well, as antsy as you could possibly be over a pitcher who went 13-6 with a 2.96 ERA.) Delgado’s projected to crack the rotation with Tim Hudson on the disabled list to start the season, while Minor could offer a big lift if given 30 starts to replicate his excellent minor league performance. Even if Hanson’s 2011 rotator cuff tear causes problems again this year, young fireballers Julio Teheran and Arodys Vizcaino are standing by. Add a stacked bullpen with post-Tommy John Kris Medlen joining Craig Kimbrel, Jonny Venters, and Eric O’Flaherty, and you have a team that should rank among the league leaders in run prevention.

BREAKOUT PICK
Heyward. He’s already got that big rookie season under his belt, but with raw power, there’s a sense that 2010’s output of 18 homers might end up looking light compared to what he puts up in his prime. He’s racked up more than 1,000 plate appearances in the big leagues and had a full offseason for his shoulder to heal. Heyward could become an MVP candidate one day, and that day might be awfully soon.

IF EVERYTHING BREAKS RIGHT
Heyward and Uggla rebound in a big way and the starters stay healthy and productive, allowing the Braves to trade for more offense — the way they did in acquiring Bourn last summer. It all adds up to a playoff berth amid a very competitive NL East division.

IF EVERYTHING GOES WRONG
The Phillies retain their crown and the rising Marlins and Nats leapfrog Atlanta. If we’re really talking worst-case scenarios, keep an eye on Hanson: He’s always had health concerns, and rotator cuff tears typically don’t heal all that easily. Even with the Braves’ amazing pitching depth, no one wants to lose a 25-year-old potential ace who strikes out more than a batter an inning.