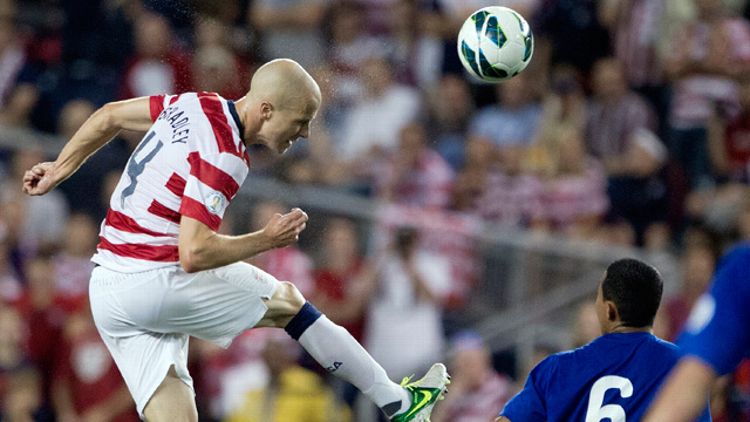 The United States national team finished 2012 with a record of 9-2-3, tying the best calendar year showing in the modern era. They qualified for the final round of CONCACAF World Cup qualification. They beat Italy and Mexico on the road, and tied Russia in Russia. They found some talent — Graham Zusi, Geoff Cameron, and Danny Williams, especially — and brought back some more (hey, Eddie Johnson). Jurgen Klinsmann’s troops suffered setbacks, as well, notably a loss in Jamaica and an inability to “play pretty” consistently, but it was a successful 12-month period. On to 2013, one more year until the World Cup in Brazil. Here are 20 things the team needs to accomplish in its centennial season.

2. See no. 1. If they don’t accomplish this goal — a quest that begins on February 6 in Honduras and ends 10 games later in Panama City’s Estadio Rommel Fernández on October 15 — the year is an unmitigated failure of the highest degree.

3. Let the Michael Bradley takeover continue. 2012 was the year he proved he was the team’s best player. 2013 should be the year the entire game plan revolves around his growing talent.

4. Find a no. 1 central defensive pair. Cameron and … Carlos Bocanegra? Clarence Goodson? Omar Gonzalez? Oguchi Onyewu? Hell, Jay DeMerit? (And, while we’re here, are we sure about Cameron? Early signs say yes, but will shuffling between right back at Stoke and center back for the U.S. prove increasingly difficult?)

5. Consolidate the ranks. 2012 saw a successfully deepened player pool. With the World Cup on the horizon, 2013 needs to be about settling on a first-choice Starting XI and determining some semblance of a substitution philosophy. Neither has to be chiseled into stone, but right now they’re written in chalk on the street and it’s raining.

6. Win the 2013 Gold Cup. Mexico won the 2009 final, a dominating 5-0 victory that helped El Tri regain their mojo when playing in the U.S. (even though both countries brought their “B” squads to the tournament). The Americans’ 4-2 loss in the 2011 final was the last game Bob Bradley coached. The winner of the coming year’s regional championship won’t qualify for the Confederations Cup, but they will have some momentum going into September’s vital qualifier in the U.S.

7. Find a forward who can score in the World Cup. The day after Jozy Altidore missed a sitter against Algeria in the 2010 World Cup, he explained what went through his head immediately before he kicked the ball. “I was thinking, ‘I’m going to score in the World Cup,'” the forward said honestly. Altidore, of course, did not. Nor has any American striker since Brian McBride tallied in the quarterfinal of the 2002 World Cup. Forwards are falling out of favor in international football — see Spain’s preferred “don’t need ’em” 4-6-0 formation — but the Red, White, and Blue could desperately use a striker capable of scoring against the highest level of competition. (For what it’s worth, my pick is Altidore, a player who has improved immeasurably since his miss in South Africa and made at least one midseason Best XI list in the Netherlands.)

8. Reach the Under-20 World Cup. The U.S. missed the 2011 U-20 World Cup and failed to qualify for the London Olympics. Tab Ramos, now coaching the U-20 side, needs to stop the trend of failure.

9. Complete the transition from Bob Bradley’s USMNT to Jurgen Klinsmann’s. Because national teams play so few games, moving from one coach to another always takes longer than it should. Sometime around the middle of 2012, the USMNT finally felt like they were becoming the team Klinsmann wanted. Another non-World Cup year will give the former German national team coach enough time to install his philosophy.

10. But remember, this game is about the players, not the coach. Klinsmann has an (understandable) ego. That said, he needs to keep it in check. The smiley German will be judged on the outcomes of the games, not the laughs he garners in the press conferences.

11. Find a leader. Captain Carlos Bocanegra’s days seem to be numbered, and he has never been a natural, vocal leader. Tim Howard is happy to yell and scream, but there’s only so much a goalkeeper can do. Landon Donovan expressed interest in the captaincy, but who knows if he’s coming back or if his quiet demeanor would be appropriately suited to the role. Klinsmann loves the bite of Jermaine Jones but the the hotheaded Schalke midfielder makes too many mistakes for the national team. Someone needs to step up and take control. Is Michael Bradley the answer?

12. Come together as a team. The growing diversity of the squad has advantages, but it can also create cliques. The vets trying to hold on (Bocanegra, Steve Cherundolo, Herculez Gomez), the Germans (Jones, Williams, Fabian Johnson, Timmy Chandler), the young guys who want more (Mix Diskerud, Juan Agudelo, Joe Gyau), etc. The groups haven’t been an issue yet — the Americans are a remarkably tight side — but keep an eye out, especially if they start to struggle in qualifying.

13. Win all five home qualifiers. The Stars and Stripes went a 9-0-1 in the United States during the Hexagonal round in 2006 and 2010. (The only blemish was a meaningless tie with Costa Rica.) Getting 15 points wouldn’t automatically put them into the World Cup, but it would consolidate the “America as fortress” meme. And these are games they should win.

14. Earn eight points in away qualifiers. A mark of 2-1-2 would best the results from the two previous cycles by one point. It’s tough to see the U.S. winning or even tying in Mexico, but they should be able to draw with Honduras and Costa Rica, avenge the semifinal round loss to Jamaica with a victory, and beat Panama.

15. Play better on the road in CONCACAF. The struggles are documented. But the excuses — the poor field, the difficult venues, the whatever — are growing tired. The U.S. is much better than any non-Mexico CONCACAF team. It’s time they played like it everywhere, even on the bumpy fields of small Central American countries.

17. More post-game Buds with Bill. And Santas for Bradley.

18. Give up on playing with three central midfielders. Jermaine Jones, Michael Bradley, Danny Williams, and, to a lesser extent, Maurice Edu are all talented players. But having three of them on the field at the same time doesn’t work. And it decreases the options elsewhere. It’s time to stop (but it won’t, since Williams and Bradley need to play and Klinsmann loves Jones).

19. Remember, it’s just a game. This one’s for the fans. This isn’t life and death, guys and girls; it’s supposed to be fun. Frustrating sometimes, for sure, but fun. Don’t forget that when the U.S. concedes yet another bad goal early in a qualification game.

20. Just freaking qualify for Brazil. And do it with minimal drama, please.