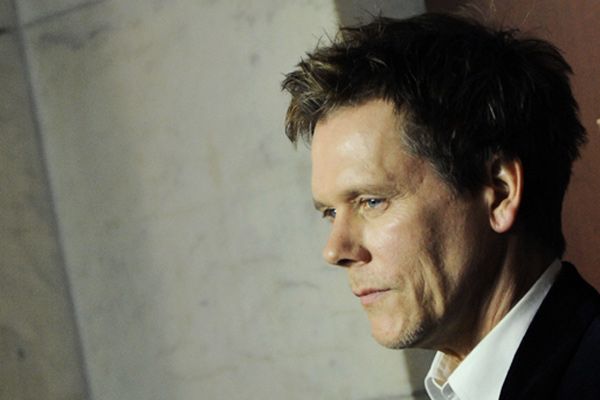 Much to our collective disappointment, it turns out that The Following isn’t very good. (Unless you’re into empty violence and fifth-grade-level Edgar Allen Poe references.) So in this week’s Hall of Fame, we decided to remember Kevin Bacon in happier times. We don’t know if you’ve heard, but he was in some things.

Andy Greenwald: Of all the things I miss about the ’80s — shoulder pads, the looming terror of an imminent nuclear strike, Snorks — chief among them is the tradition of music videos “inspired” by a film. I don’t know how exactly we, as a people, came to accept the awkward mise-en-scène of a strident pop rocker (let’s be honest, usually Kenny Loggins) playing a studio-buffed maybe-hit on a set somewhere in North Hollywood while quick cuts to context-free clips from the movie he’s ostensibly promoting rain down like cocaine in an earthquake.

Footloose is a particularly great example of the form because it inverts the Flashdance formula (perfected just a year before in Irene Cara’s “What a Feeling”), replacing the sex-panther gyrations of Jennifer Beals with Kevin Bacon’s sweatpants strut. Better: Loggins himself got the day off! There has to be a version of this video with him in it, but maybe his beard just wasn’t feeling well. Instead, the movie-clip guy had to work overtime. It was 1984, and you can just feel the dawn breaking through the slats of the editing bay while a sweat-soaked AVID operator berates himself. “It’s not enough to see Chris Penn gorilla-strut through a meadow once: We have to run it back!” There are so many unnecessary cuts in these three minutes and 50 seconds it reminds me of the Crazy 88 sword-fight scene in Kill Bill. (Even Loggins gets into it by the end: “Everybody cut!” he yelps.) It’s epileptic. It’s great.

Final confession: I have never actually seen the movie Footloose! After living with this clip for almost 30 years (!), I feel like I don’t need to. Everything is right here, in this video, in this song. Kevin Bacon — who really can move, btw, though you wouldn’t know it from his embalmed performance in The Following — is dancing his anger out! Look at him hitting the walls of a grain elevator (?) right on the downbeat! Dancing saves lives and frees farmers from their backward ways. Anything can be musical: flipping burgers, flipping off John Lithgow, even Chris Penn (R.I.P.). I don’t want to know what sort of era-appropriate lite-synth jams Bacon and Penn were actually boogieing to, or what, exactly, they were pissed off about. I want to take these lyrics as gospel, with their unironic talk of clock-punching and Sunday-shoe-kicking. Please don’t tell me there aren’t really characters named Louise and Milo, beautiful young Americans clad in leotards and saddle shoes, roaming the countryside freeing working people from their square-peg lives one two-step at a time. A world without them in it doesn’t sound like one worth living in to me.

Charles P. Pierce: One of the greatest things about Oliver Stone’s JFK, besides its brilliant editing and its brilliantly surreal explanation of The Plot In Dallas and its absolutely brilliant whitewashing of Jim Garrison, was the plethora of great small roles in which the actors were encouraged to go so far over the top that they endangered commercial air traffic. It begins with Joe Pesci, as David Ferrie, his psyche as unhinged as his eyebrows, and John Candy as the sleekly fat, corrupt New Orleans attorney Dean Andrews. (How do you get your upper lip to sweat on cue? Candy took the secret to his grave.) But the best one is Bacon’s turn as Willie O’Keefe, the male hustler-cum-political theorist that Kevin Costner’s Garrison interviews in the gen-u-wine Angola Prison. He’s got the prison swagger down, and when he starts raving about how fascism is on its way, you tend to forget that Stone has put together an obscenely baroque view of gay life that would have embarrassed the makers of an Army training film circa 1952. (The gay bar scene in Advise & Consent looks like an episode of Glee compared to what Stone has going on in the French Quarter.) And whoever it was that told Bacon to make a pass at “Mistuh Garrison” at the end of their scene should get a raise, and then should be flogged out of Hollywood.

Molly Lambert: Wild Things is the ultimate late-night neon-noir cable classic, yet it is remarkably hard to find a version of the Wild Things pool makeout scene online that doesn’t have Kevin Bacon cut out of it. For some reason a lot of people edit out Bacon’s reaction shots (and covert videotaping) to focus on babes Denise Richards and Neve Campbell getting it on. What would a steamy lesbian kissing scene be without a few close-ups of Kevin Bacon inserted throughout? It helps the viewer to identify with what it’s like to watch these two hot chicks make out in a pool. It’s an important plot twist! Bacon has his own infamous full-frontal nude shower scene later on in the movie, although sadly no one pours Champagne on his chest.

Steven Hyden: So The Following is grossly violent, even repugnant entertainment. Before Kevin Bacon hunted mass murderers, he was being stabbed in the throat by them. Kevin Bacon and his throat will only be pushed so far. If Jason Voorhees had just let him smoke a little weed back in 1980, things might be different today.

Rafe Bartholomew: My good friend saw Tremors in the theater shortly after her family moved to the United States. She was 9 years old and it was her first American movie on American soil. And if you can point me to something more American than Kevin Bacon and Fred Ward blowing up evil, blind, subterranean “Graboids” with explosives borrowed from their survivalist friend Burt, I owe you a fat slab of bacon.

Mark Lisanti: In the pantheon of bike-messenger movies, there is Quicksilver, and then there is a smoldering, 50-foot-tall pile of twisted Schwinn frames, and then there is Premium Rush. This is not a knock on Rush; it’s a fine film, a bike-messenger tale for our times. It’s a celebration of Kevin Bacon’s genre-defining turn as disgraced trader Jack Casey (“he wasn’t just good, he was the best,” he wanted to “sell every option” he could get, then he “lost it all, everything”), a Wall Street casualty who sought refuge from the nightmare that was capitalism in the mid-’80s on the delivery circuit. There is action, there is redemption, there is a young Jamie Gertz, and there is a raspberry beret. There is an erotic bicycle ballet. But most importantly, there is a still-feeling-out-his-cinematic-powers Bacon. This trailer — man, they really don’t make trailers like they used to — sells it perfectly; if Quicksilver‘s not already in your Amazon cart, I don’t know what to tell you.

Dan Silver: What’s amazing about Kevin Bacon in Animal House is not that it was his first appearance in a film, or how his perfectly douchey demeanor makes him a standout in all his scenes, or even his grandma-size tighty-whities. It’s that Animal House was released 35 years ago, and aside from some slight pruning, Bacon barely looks like he’s aged a day. So until that triangle-shaped, doe-eyed face begins to show some real street miles, he’ll always be Greg Marmalard and Doug Neidermeyer’s pledge Chip Diller asking for more.

Sean Fennessey: Here’s something personal about me: I am absolutely insufferable to watch Jeopardy! with. Just the worst kind of guy. Answering all the questions in a laconic, Are you kidding me with this easy crap? tone, rolling my eyes at the dunderheaded contestants, chortling at the Daily Doubles. If I get a question wrong, I mumble the right answer under my breath after it’s been revealed, as if I knew the entire time. (I didn’t.) Seriously, just throw me in an acid bath while I’m watching a trivia game show. Anyway, so, there’s a place in my heart for Fenwick, the perpetually drunk, sneery, sports car-crashing, sad rich kid from Barry Levinson’s Diner. “You look like you got a bump on your head,” Bacon gurgles, while watching the College Bowl, at some undergrad who can’t quite fathom the location of the Zygomatic arch. Reminds me of me during Jeopardy!‘s “College Week.” Stupid seniors …

Alex Pappademas: Pretty sure this (plus the words “in slow motion”) was exactly how Zack Snyder pitched Man of Steel.

Tess Lynch: So here’s Kevin Bacon, as alcoholic teen TJ “Tim” Werner no. 2 of 4, in Guiding Light. Working on the soap allowed Bacon to emancipate himself from waiting tables and perform in plays at night, not that playing the rakish, linen-sweater-clad cad on daytime television wasn’t already artistically fulfilling enough. This clip is such a shining example of the 18 TPY, by the way (the character was supposed to be 16; Bacon was 22). Somebody must have made his eyes go *pop* for the auditions.

The Air Up There

Amos Barshad: In 1994, within a month of one another, two college basketball movies were released. One was an incisive take on corruption and megalomania that featured the greatest performance in the long career of Mr. Shaquille O’Neal. The other had Kevin Bacon going on a vision quest to become an honorary member of an African tribe so that he could help that tribe win a super-important basketball game. So, yes, of course Blue Chips is the one everyone remembers. But there is some value to be found in Bacon’s The Air Up There. Sure, it was buffoonish, painfully unrealistic, and almost offensively simplistic — but it also had the Jimmy Dolan Shake-and-Bake, one of the most underrated fake sports moves of all time. As for the move’s deadliness, all you need to know comes to us via Wikipedia: “Charles Gitonga Maina [the actor who played Saleh] attended college at Lynn University on a basketball scholarship from 1997 to 1999. His coach would not allow him to use the ‘Jimmy Dolan Shake-and-Bake’ move in competition games.” And that’s the kind of hard, concrete factual information you really can’t argue with. (The whole movie’s on YouTube. Hope you don’t have anything important to do today.)

Mad Men Returns April 7, and It's Back With a Two-Hour Movie