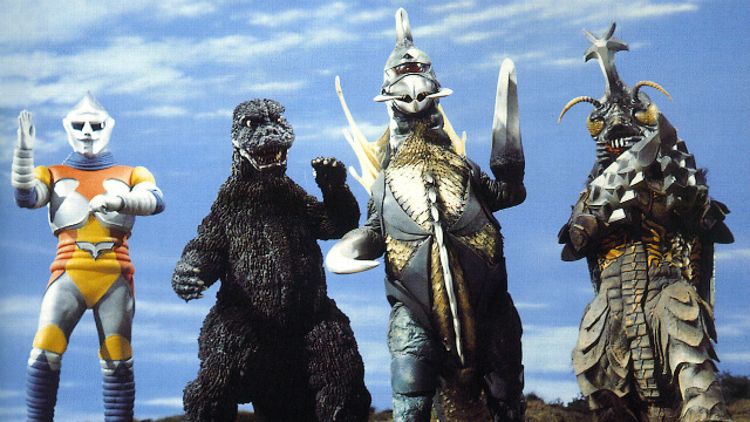 Pacific Rim is almost here. It’s about giant robots fighting giant monsters. Maybe you’ve seen the 1,500 commercials and trailers? We bet you have. Probably on this very site, multiple times. These are our lovingly handpicked robots-and-monsters clips. Enjoy.

Jet Jaguar in Godzilla vs. Megalon

netw3rk: Cooperation between giant robots and kaijus is often times illusive. An exception is the deceptively titled 1973 kaiju film Godzilla vs. Megalon, which is deceptively titled because Godzilla doesn’t show up until the end of the movie and the real hero is Jet Jaguar, a humanoid robot built by three science dudes for no apparent reason other than robots are cool to build. The plot of this movie is pretty standard ’70s kaiju stuff. A race of underground humans who dress in togas have had it up to here with all the nuclear testing the regular old aboveground humans have been doing. Which, OK, fair point. So, as one does, they call on their god Megalon — a huge, beetle-esque kaiju with drills for hands — and bid him be their vengeance on earth. Listen, exposition in kaiju movies is basically a long wah-wah guitar foreplay riff to the main event, which is always monster fighting monsters. Long story short, Jet Jaguar and Godzilla eventually team up to battle the aforementioned Megalon and another evil monster named Gigan. Some cool things happen during the Jet-Godzilla-Megalon-Gigan tag-team battle: Jet Jaguar and Godzilla stand back-to-back in a circle of fire; Godzilla cradles an unconscious Jet Jaguar in his (her?) arms to shield Jet from said fire; and, in the above clip, Jet rudely waylaying Megalon as Godzilla executes a gravity-defying double falcon kick. That’s fucking teamwork.

Anyway, here’s a later iteration of the young ladies with their song.

Sean Fennessey: In the span of 18 months, the Long Island rapper Daniel Dumile released three albums under three different masks: his original MF Doom identity, a “villainous” mutation of his KMD persona Zev Love X; the alter ego Viktor Vaughn, a rapping spotlight for Dumile that featured the work of the young producers on the SoundInk label; and King Geedorah. Geedorah, like Vaughn and Doom, is a purposefully mangled spelling of a cult character in an effort to deflect lawsuits. (The idea of Marvel pursuing a suit against Dumile is wonderful — picture Doom being deposed in full mask-and-cloak regalia.)

But anyway, Geedorah is Ghidorah, the three-headed, bi-tailed alien-dragon from Toho’s Godzilla universe. The above clip, of the song “Fazers,” is the only I could find that paired Geedorah’s music and Ghidorah’s lightning-bolt fire-breathing from the 1965 film Invasion of Astro-Monster. (Recommended, and it’s streaming in full here. Astro-Monster is the second (and best) Ghidorah film I’ve seen. Check out Godzilla throwin’ haymakers like Sugar Ray Robinson in this clip.) The King Geedorah album, Take Me to Your Leader, was released 10 years ago last month, and it may be my favorite from a particular era of independent rap, just as the walls of record stores like Fat Beats, and web distributors like hiphopsite.com and sandboxautomatic.com, began to fall and these albums became available en masse. “Next Levels” is among the most played songs in my iTunes, for reasons I can’t quite pinpoint. Those smooth jazz horns, maybe. (Doom doesn’t even rap here; Lil’ Sci, ID 4 Windz, and staHHr are the MCs.) Dumile’s rationale behind Leader was typical Doom: “This whole album is Geedorah’s alien perspective on humans. This is done intentionally to show the listener a mirror image of his/herself and the way we see each other.” An alien-dragon’s perspective on humans. Fair enough.

Once upon a time, Doom albums like this piled up on the desks of rap collectors. He released six total in three years, along with a 10-volume collection of his beats. But it has now been four years since a new MF Doom album appeared. King Geedorah has been resigned to the gamma depths of Dumile’s mind since 2003. May he one day rise again to terrorize us.

Mark Lisanti: We never said they had to be giant robots. Or cool robots. Or not-totally-ridiculous robots. Anything goes in the robots vs. monsters space, got it?

And so we have this clip, with the patently unfair www.awesomelybadcrap.com URL splashed across its top, of Buck Rogers sidekick Twiki falling in love with a waitressbot of the same make. The instant that Twiki’s shown any romantic interest, he drops Dr. Theopolis like he’s hot — and the Theopolis may, in fact, be hot, as he’s basically C-3PO crammed into a Lite-Brite pie tin, and all that haughty microprocessing power must throw off a fair amount of ambient heat — leaving the clock-faced wingman helpless to escape the space-club unless Buck himself strikes out and deigns to Flavor-Flav the good Doctor out of there.

Kind of makes you wish there were a tiny lizard monster a couple of tables over to stomp Twiki’s ass for dumping his bro-bot like that.

Jay Caspian Kang: Billy Mitchell controls both the monsters and the robots. He is the God of War.

Andrew Sharp: The best Godzilla movie is a music video.

Some important notes on this:

1. We begin with Godzilla throwing a bus into Puff Daddy’s condo. Puff dives out of the way, then calmly dusts off his leather suit to begin rapping out of the side of a building.

3. Puff Daddy’s autobiography is 300 blank pages and then nine words on the last page: You think you know, but you have no idea.

4. What you know about rapping on an elevator going 200 miles per hour?

5. What you know about an elevator exploding out of a building so that your body can turn into a flock of doves 1,000 feet in the air?

7. The 2:06 mark: The Led Zeppelin riff quiets down. Puff Daddy is floating though the clouds in an all-white suit, singing off-key, and eventually he lands on a stage surrounded by an orchestra, also in all-white.

8. Every Hamptons white party starts with that exact sequence.

9. We’re in Times Square. Jimmy Page is on the big screen, the city is on fire, Puff Daddy’s doing fist pumps and not backing down. Godzilla is eating army helicopters, but fuck it, Puffy’s in the zone.

10. It all ends with Puff staring Godzilla in the face, then turning around to walk back toward his orchestra. WHAT YOU KNOW ABOUT IT, GODZILLA?

Transformers: Revenge of the Fallen

Chris Ryan: This car-robot-Shia chase got A STANDING OVATION IN THE MOVIE THEATER I SAW IT IN BECAUSE THIS IS AMERICA AND IF MICHAEL BAY WANTS TO SHUT DOWN A HIGHWAY FOR A WEEK TO THROW SUVS IN THE AIR THEN HE CAN DO IT BECAUSE, I DON’T KNOW … BARACK OBAMA.

Andy Greenwald: Guillermo del Toro seems like a delightful fellow, a Guadalajaran hobbit with an artistic imagination strong enough to prop up his passionate fanboyism and attract the interest of the wider world. And his Pacific Rim seems intriguing and worthwhile as far as these things go, especially when “these things” refers to $200 million movies about Stringer Bell and Lloyd from Undeclared forming like Voltron to defeat Godzilla. If I’m going to see a movie that makes Harry Knowles take to his fainting couch, I suppose I’d prefer to have Guillermo del Toro directing it. But think for a moment: Wouldn’t you rather be shelling out $17.50 this weekend to see Nathanial Hornblower’s version? Though the peripatetic Swiss filmmaker hasn’t been seen since the untimely passing of Adam Yauch, his longtime collaborator and muse, he has all the necessary attributes: a sense of humor and scale, terrific facial hair, and, in the above clip for “Intergalactic,” he has the perfect demo reel. I’m sure the giant mecha droids in Pacific Rim can “cancel the apocalypse.” But can they pop and lock?

Craig Gaines: This is the monster-movie ethos — big thing smashes small thing — boiled down to one, perfect gag. It’s the only portion from the Godzilla unit of my early pop-culture education that I vividly remember, the rest of it a joyful haze of Mothras, Mechagodzillas, and Monster Islands. In just a minute and a half, Bambi Meets Godzilla will teach you all you need to know about competent joke design, with its languid setup and snappy (stompy?) punch line. It’s also a useful visual aid when one wants to communicate complete, sudden domination, which is why it was the first thing to come to mind when I was back in Detroit a few weeks ago and saw Chris Davis obliterate a meatball from the poor, doomed Jose Valverde. Weak and small, yield to monstrous and enormous.

Patricia Lee: In this robots vs. monsters fight, I am 100 percent on the robots’ side. Show me Majin Buu, and I’ll call your bet with Alpha 5, WALL-E, and R.O.B. Show me Mike Wazowski and Sulley, and I’ll go all-in with Bender. Yes, Futurama’s very own crude, sarcastic, almost-too-human robot phenomenon.

Not familiar with Bender? Just know that, like us, he’s terrible at dancing and rapping, guilty of drinking too much, capable of smoking too much, more than willing to make crude jokes, and when frightened, shits bricks (literally). And if none of this convinces you that robots > monsters (and that Bender > all), well, you can bite my shiny, metal ass.

B.S. Report: Wesley Morris on the State of Movies