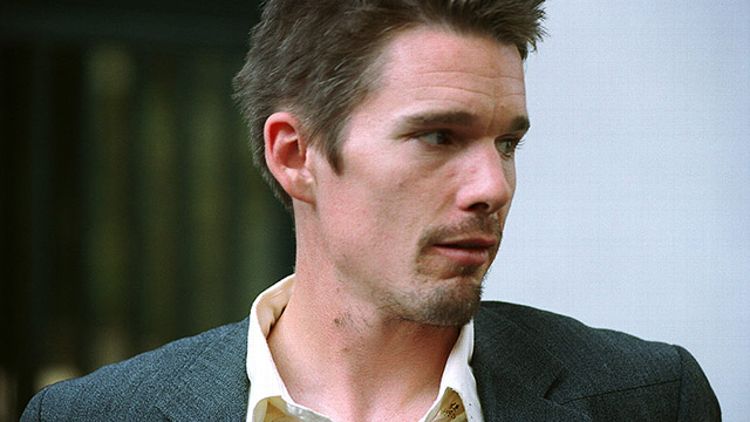 As our own Wesley Morris proclaimed yesterday, we are now approaching the end of what has secretly been the Summer of Ethan Hawke all along, and what a better note to end it on than with the Friday’s release of Getaway, starring Hawke and grizzled, street-smart criminal Selena Gomez. What better time to take a long, loving look at Hawke’s finest career moments, in all their heartbreaking, Goop-smooching, PCP-smoking glory?

netw3rk: In the early-to-mid-1980s, movies featuring humans having meaningful relationships with aliens was all the rage. E.T. the Extra-Terrestrial, The Last Starfighter, Starman, Cocoon, Enemy Mine, Flight of the Navigator, Batteries Not Included, and Ethan Hawke’s feature-film debut, Explorers, all had earth folks in mullets, perms, and popped collars discovering, befriending, and falling in love with sentient alien creatures. These days, movie aliens just want to kill us and destroy our great tourist attractions. Explorers — which also starred a fresh-from-a–South American–hippie-cult River Phoenix in his own film debut — tells the story of three misfit kids who invent a force-field technology capable of propelling a homemade spacecraft through the cosmos, where they eventually meet some wacky aliens who sing, dance, and tell corny jokes. It was an innocent time.

Bryan Curtis: Has any other series of movies depended so much on when you see them? Not in the big-screen-vs.-DVD sense. In the wide-eyed naïf–vs.–twentysomething goofball–vs.–grizzled vet of love and heartbreak sense.

I saw Before Sunset when I was 27. It speaks poorly of me that it meant very little. So Jesse and Céline hadn’t managed to meet up in Vienna six months later. Ah, well. You don’t return every text. You don’t show up at every party. It’s clear now that I was still in my Before Sunrise phase: The future is infinite, the trains will always run, and the next once-in-a-lifetime meeting is right around the corner.

Over years, Before Sunset stayed with me. I … lived. Or tried to. And all of a sudden the movie made sense: the thirtysomething ennui; the cautious footsteps; the fanatical leanness that had crept into Ethan Hawke’s cheeks. I love this movie now. It reminds me of all my Viennas.

Alex Pappademas: Look at this slide show. You are looking at a man who’s made it through 40-odd years of life without learning how to dress himself and doesn’t know it. A man who knows the dictionary definition of irony but wears butterfly collars unironically. A man who probably owns a West Elm jewelry tree for his collection of wallet chains. And this is ironic, because Ethan Hawke’s career onscreen constitutes a decades-long master class on how to illuminate theme and character through clothing, specifically through the craft of Shirt Acting. Why waste your time studying the Method or the Meisner Technique or doing months of tedious research? You’re an actor. Actors wear shirts. Why not make yours do some of the hard work of acting for you? Your average shirt comes with at least two tails and around seven buttons, but it doesn’t come with an instruction book. So go nuts. If you can find your character’s shirt-story and tell it through eccentric buttoning and tucking, you’ve already crafted half a performance before even leaving your trailer. Are you playing a semi-devoted husband still clinging to his lost youth via book-tour nookie? Go with the denim shirt, untucked on one side, to symbolize that which remains disordered even in the ostensibly settled man. If your character is a dystopian-near-future security consultant ironically imprisoned in his fortified McMansion, make it a white-collar shirt, untucked on the other side, to demonstrate the inevitable unraveling of all things. Hawke’s known this for years.

In Reality Bites, he played Troy, who communicates his disdain for the Man and His rules by habitually buttoning only one button of his thrift-store dress shirts. That lone buttoned button tells you all you need to know about Troy. He will button the minimum number of buttons you can button; he will conform to society’s rules in a way that exposes those rules as ridiculous. When I saw this movie for the first time, in high school, I couldn’t understand why Winona Ryder would pass up a cool dude like Ben Stiller for a jerk like Troy, but I started buttoning my shirts like him anyway, just in case. Did it for months. Looked like the world’s nerdiest cholo the whole time. You can read more about this period of my life in my forthcoming collection of thinly veiled autobiographical short stories, The Coolest Guy.

Before the Devil Knows You’re Dead

Steven Hyden: I know it doesn’t seem like Hawke is doing much here. He is thoroughly overshadowed by Philip Seymour Hoffman’s forehead vein. But that’s the beauty of his performance in Before the Devil Knows You’re Dead — he’s a virtuoso when it comes to reducing himself to a sweaty, sniveling nothing. I’d argue that “golden boy goes to seed” is the role that Hawke plays best. He’s not an unlikable actor, exactly, but there’s something about his crooked mouth and handsomely disheveled sense of style that screams “I’m coasting through life!” even when he’s trembling on the precipice of a nervous breakdown.

Dan Silver: Andrew Niccol’s underappreciated sci-fi tale marks Hawke’s career tipping point from “I’m not just the sad kid from Dead Poets Society or a flannel-wearing slacker” to the current “I think I can be both a legitimate actor and a genre star at the same time.” This is a period in which he feels it’s OK to follow up Before Sunset with the schlock-fest Taking Lives and a remake of Assault on Precinct 13.

Emily Yoshida: I am not a particular fan or non-fan of Ethan Hawke, and I think his performance in this scene is immediately upstaged once we see the Goopster in that #iconic (for me and my friends in high school) green velvet dress. I mostly just wanted to talk about how Great Expectations, while visually gorgeous, is a completely ridiculous movie, as you can probably tell from these four minutes (I dare you not to laugh at those five seconds of halfhearted dancing), but heeeyyy is that Alfonso Cuarón’s first stab at a virtuoso multi-scene tracking shot? YES, I THINK IT IS.

Karina Longworth: In a movie released in 1994, Ethan Hawke succinctly defines irony and also “casually” repurposes the opening of Richard III as a telephone greeting. In a movie made in 1999 and released in 2000, Hawke recites Hamlet’s “to be or not to be” speech while stalking the aisles of a Blockbuster Video, wearing a chin-tie knit cap–and–blazer combo, as clips from The Crow: City of Angels play ominously overhead all the while.  Was the second half of the ’90s defined by the incorrect usage of Shakespeare, seemingly without ironic purpose or even comprehension of the actual or literal meaning of the text? Sure — I mean, that and rap-rock, steroids in baseball, and the president’s penis. Right?

Chris Ryan: I have lots of favorite Ethan Hawke scenes. You may have read about some of them. Rather than highlight anything in particular, like the diner scene from Training Day, the fight in the bar in Reality Bites, anything from Midnight Clear, or any number of strolls from the Before … series, I’d like to give a shout-out to Hawke’s commitment to the promotional process of making movies. Everybody is selling you something, but when Ethan Hawke is selling, it always seems like the product is Rainer Werner Fassbinder’s Berlin trilogy. When my man is making the quasi–”it’s all connected” hand gesture and saying the movie is “not about a plot and it’s not about a person,” I really can’t even. BRB, going to go watch Getaway interviews to see if Hawke’s comparing Selena Gomez to Jill Clayburgh in any of them.

Amos Barshad: When you think “Training Day” you think Denzel first, and that’s totally right. For almost the entire movie it’s Alonzo churning up the action, firing forehands, running poor Jakey ragged around the court. There is, of course, excellent craftsmanship in how Ethan Hawke keeps the ball in play, never in full control yet never quite defeated either. And then there’s the bathtub scene, probably the most ridiculous sequence in the movie, and the one the entire plot and late-breaking reversal hinges on. What happens if the other dude doesn’t wanna grab the soon-to-be dead man’s cash out of his wallet? What happens if Letty keeps lying to Smiley? What if she just so happens to not pick up the phone? Blow, brain bits all over the shower curtain. But you don’t think about that: You think about Hawke’s wide-eyed banshee terror — “I have a little girl!” — as he begs for his life and then, right at the end, you think about that face, the one that menacingly whispers “I will now destroy all of my enemies.”

“I loved you on St. Elsewhere!”

“When is Virtuosity 2 coming out?”

Mark Lisanti: You may not remember — in fact, you may not have ever been aware — that Ethan Hawke was the second-billed whale obsessive in the Encore Originals Cable Television Event Moby Dick in 2011. In a lot of ways, this role was a spiritual successor to Hawke’s acclaimed performance in Training Day; substitute Denzel Washington for a creaky ship full of filthy seamen, Denzel Washington’s PCP-laced weed for a harpoon, and the claustrophobia of an unmarked police car for the unfathomable and yawning vastness of the ocean, and you have essentially the same emotional journey. I choose the stripped-down, unfinished scene above because we don’t need CGI trickery distracting from the intensity of Hawke’s performance. There may be five other actors in that boat, but only one of them is steering it. Ethan Hawke, I think. I’m not sure how boats work.

Do You Like Prince Movies? Podcast: The VMAs and Songs of the Millennium