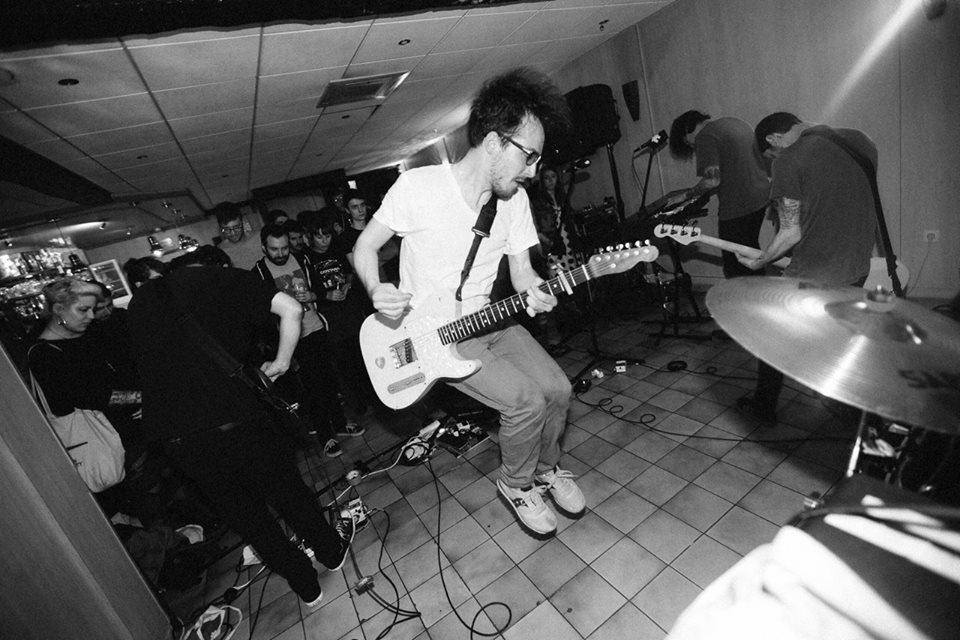 The most exuberant moment on LP3, the new album by the joyously uplifting Philadelphia punk band Restorations, occurs in the final minute of “No Castle,” the record’s most unabashed shoot-for-the-rafters, heart-on-our-sleeves anthem. Up until that crucial 60-second interval, “No Castle” encapsulates everything that’s likable about the group: singer Jon Loudon’s impassioned gravel-on-sandpaper growl, milewide riffs that rain down from on high over a relentlessly chugging rhythm section, and a chorus that practically begs to be hollered the moment you hear it. It’s an endearingly pure and unself-conscious sound made by thirtysomething ex-hardcore kids who thought their shot at a music career had already passed them by, and now have nothing to prove.

Then Restorations kicks it up another notch in the least punk way imaginable — with a florid, gloriously wanky guitar solo that sounds like it was beamed in from an early ’80s Judas Priest live record. Then, amazingly, comes a second florid, gloriously wanky guitar solo, dueling with the first. At that point in the song, the amount of fucks given about punk credibility and/or indie-rock coolness is reduced to zero. It’s magnificent.

This is the benefit of not caring about acceptance: If you want to combine Joe Strummer with Eddie Van Halen, nobody is going to stop you.

“We were in the studio just laughing about it, having a good time,” Loudon recalled fondly when I phoned last month. “Just like, ‘This fits, fuck it, this is what we’re doing.’”

“This fits, fuck it, this is what we’re doing” might as well be the band’s mission statement. Above all else, LP3 is a record made without a sense of obligation to a career, current trends, or any particular music scene. Instead, Restorations makes a heartfelt statement of hope and communion, reveling in the simple pleasures of convening in a room with best friends and creating the biggest noise you can. While the energy and conviction of LP3 comes from punk, Restorations also draws from classic rock, metal, and shoegaze influences. (During our interview, Loudon name-checked the Allman Brothers Band, Spiritualized, Torche, and Catherine Wheel.) Whatever sounded good and muscular got added to the pot.

Somehow Restorations makes these disparate antecedents fit together beautifully, like on the pensive “Separate Songs,” a bruising ode about workaday drudgery that augments a minor-key heartland-rock melody with stabs of bludgeoning, over-amped guitar.

Restorations is the more fully realized sequel to the ’00s post-hardcore outfit Jena Berlin, which was ground into dust by a perpetual loop of low-budget tours and under-supported indie albums. By the time Jena Berlin ended, “We weren’t able to play the shows we wanted, we were missing all this stuff at home, and we were continuously broke,” Loudon said.

The idea with Restorations was to build a band around life at home, not the other way around. Before the release of Restorations’s self-titled 2011 debut, Loudon and his bandmates imagined the project as primarily a songwriting vehicle they could dabble in while maintaining jobs and relationships. The hard-touring days of old were behind them, they thought. Over time, however, those plans have changed: The band’s second album, LP2, was released in 2012 by SideOneDummy Records, the indie punk label best known for the Gaslight Anthem. With this week’s release of LP3, the audience for Restorations has grown to the point at which Loudon is touring as much as he ever has.

“The big thing with the band that we were ultimately able to achieve, which is kind of great, is that we just wanted to make records and play shows that meant something,” Loudon said. “I guess the old model is that you have to be out playing shows so that anybody will notice that you’re there at all, whether or not your band is good. For your band to exist at all, you had to be out there like 200 days a year touring and burning yourself out. It was a hell of a lot of fun, to be honest, but I guess it’s not that much of a good business model.”

If the Restorations story has a familiar ring, perhaps it’s because there are echoes of some of the band’s biggest inspirations. The Hold Steady and Drive-By Truckers also formed when the band members were north of 30, and rose from obscure punk roots by playing a postmodern version of arena rock with all the fat removed.

“There was a point on one of the last tours that Jena Berlin did, where we met the Gaslight Anthem on their first tour,” Loudon said. “And they were like, ‘Yeah man, we’re, like, 30, just doing bar rock, just out for a week or two,’ or whatever it was. There was a lot of that thinking that clicked with us at that time, like, ‘Yo, touring is stupid, it’s all metalcore and punk stuff right now, and nothing is happening.’”

Restorations became a playground for the guys to realize their most wondrous big-time rock fantasies, which Loudon said came to a head on LP2, when the band stockpiled guitar tracks like Queen in the mid-’70s. For LP3, the idea was to keep the music relatively straightforward and sparse, allowing for each sound to register with maximum impact. Working with in-demand producer-engineer Jonathan Low — whose run of stellar 2014 releases includes LPs by the War on Drugs, Strand of Oaks, and Modern Baseball — Restorations aimed to give LP3 a sense of understated, almost elegant majesty on tracks like “Misprint” and “The Future.” It signals a calm assurance at the heart of the record, the sort of feeling that normally comes with getting a little older and wiser, when being in a band doesn’t have to be your whole life. Instead, it can help to illuminate what really matters.

“Everything is a little simpler and sturdier, and there’s a lot more certainty with everything rather than, ‘Oh god, this is going to take my life away from me,’ Loudon said. “It’s like, ‘Man, life is so much better now that we’re doing this.’”

Do You Like Prince Movies? Podcast: ‘The Knick,’ Run the Jewels, and More