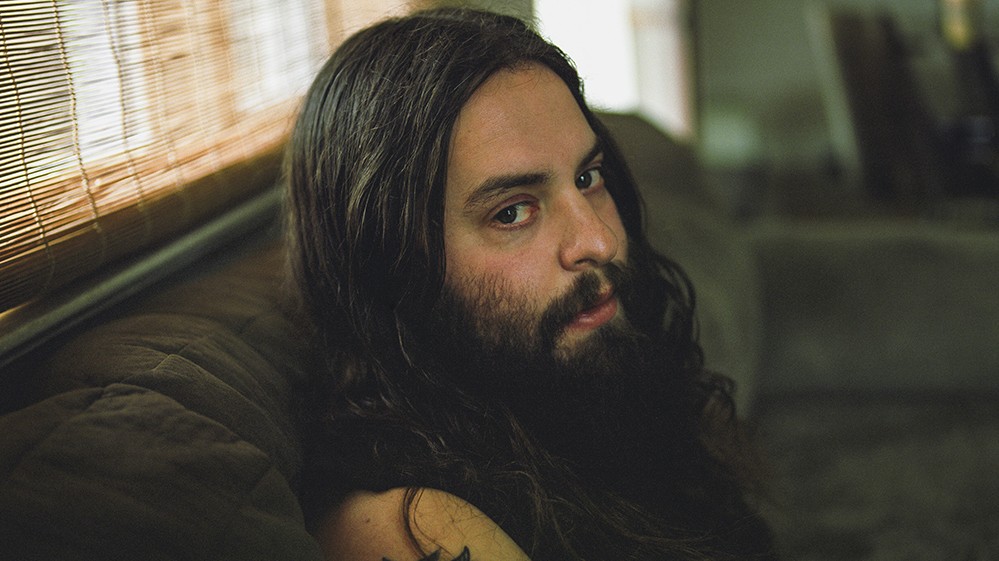 For five years, Timothy Showalter has been putting out imaginative and emotionally overpowering records as Strand of Oaks, a moniker that immediately implies an association with sensitive, nature-boy, singer-songwriter folk. That presumption was more or less accurate before Showalter’s fantastic forthcoming LP Heal, due out June 24. The 32-year-old Indiana native and current Philadelphia resident did indeed play his sometimes autobiographical, sometimes fantastical songs with a downbeat acoustic strum on previous records like 2009’s Leave Ruin, 2010’s Pope Killdragon, and 2012’s Dark Shores. For the most part, Strand of Oaks’ albums rarely strayed from the “hushed intimacy” zone. Whenever lightly tapped drums or a vintage synth entered into the mix, Showalter’s music seemed almost orchestral by comparison.

“A lot of my records sound really good in a coffee shop, when you are on the Internet. It’s, like, a mellow nice voice,” Showalter conceded when I phoned him at home last week. “[But] a lot of the greatest anthemic records I listen to could also have been played on acoustic guitar. James Taylor could have sang them and you’d be like, ‘Oh, that’s a pleasant song.’ But, you know, it’s just putting it into the right context for what you’re trying to say.”

For Heal, Showalter says he overcame whatever insecurities he had about expanding his musical palate and made the full-on rock record of his dreams, with big guitars (supplied on the rampaging opening track “Goshen 97” by J Mascis), aggressive rhythms, and dreamy keyboard splashes. At times the mix of riffs and New Order–like synth pop recalls Showalter’s childhood favorite, the Smashing Pumpkins. (Showalter and I spent nearly a third of our phone conversation exchanging theories about the rise and fall of Billy Corgan, as Midwest music fans weaned on ’90s rock inevitably do when left unattended.) Elsewhere, like on the slow-burn guitar jam “JM,” Showalter resurrects the heartland desolation of the late Jason Molina, one of his songwriting heroes. Heal also isn’t far removed from the epic, vision-quest pop-rock of fellow Philadelphia band the War on Drugs, which similarly combines swirling, evocative atmospherics with lovelorn lyrics.

While I appreciated Showalter’s previous work as Strand of Oaks (particularly Pope Killdragon’s “Daniel’s Blues,” a riveting “what if?” narrative about Dan Aykroyd murdering John Belushi’s drug dealer), Heal is the first album that truly connected with me. It’s the kind of transformational record that makes you go back and hear an artist’s older work with fresh ears and new appreciation. For instance, Strand of Oaks’ 2013 Darker Shores EP might have seemed at the time like a curio, collecting rough but vital demos that Showalter recorded in advance of Dark Shores. But now it sounds like an important transitional work, clearly pointing to the rock-band arrangements of Heal. Showalter said he initially wanted Dark Shores to sound like Heal, but lost his nerve.

“I don’t know if I got stuck in the ghetto of folk music, but it just seemed like something I could do well and it became scarier to reach for something grander,” he said. “When it came time for Heal, I was like, life is too fucking short to make another folk record. Basically 15-year-old me, this would have been the first record he would have liked. I was like, ‘I want these songs to echo in the halls of Pompeii.’ I want this to sound good in a stadium. I don’t fucking know if I’ll ever play a stadium, but I will in my own imagination.”

A former schoolteacher with a habit of greeting strangers like long-lost buddies — while discussing alternate track listings for Mellon Collie and the Infinite Sadness, he invited me to dinner when Strand of Oaks plays near my town in two months — Showalter’s gregariousness belies a moody, depressive intensity and oft-troubled home life that’s spelled out unambiguously on Heal. The lyrics detail the precarious state of his marriage during the two-year period since his last record, a time when Showalter confessed that he used touring as a means to avoid facing sobering truths at home. References to infidelity appear throughout Heal, most conspicuously in the caustic “Mirage Year,” in which Showalter sings vengefully of his wife’s lover, “That winter when you took my love / and that fucker was having his fun / but my hands are worth more than your blood.”

“It was me trying to say the worst thing that I could possibly think of,” Showalter said. “Like, what hurt me the most in my life? And that’s my wife cheating on me and it’s me not driving to kill the guy with a bat. Instead, I am gonna write a song about him because I don’t really wanna go to jail for the rest of my life.”

In a way Showalter has always worked in the mode of “confessional” songwriting, but as he sees it, his previous albums weren’t explicitly confessional enough. Leave Ruin, for instance, is about his high school sweetheart and the end of their relationship. But he never comes out and uses her name, Caitlin, like he does on Heal’s title track. (The song also references Sharon Van Etten, whose recent Are We There is a kind of companion record for Heal.) Transitioning from nouns to proper nouns in the lyrics might seem like an unnecessary indulgence, but for Showalter the shift was crucial.

“There is the singer-songwriter approach that I got really fed up with, that just seems so fucking dishonest. Like, don’t talk about a goddamn mountain, talk about the girl that broke your heart. You don’t have to be a poet,” he said. “Just saying Caitlin in that song, actually saying her name, is more powerful than the whole first record that I made. It’s more honest, it exorcised more demons, and it just was kind of the story of this whole record. It was like, ‘No bullshit, I am just gonna say exactly what I am thinking right now.’”

That sounds great in an interview with a music critic. But living that reality in the space between Showalter’s artistic and family lives seems more than a little awkward, especially since Showalter and his wife are still together. Even for a music critic, bumping up against such personal matters just by merely giving the lyrics a cursory read is uncomfortable. But in conversation, Showalter’s friendly generosity does not dim even when he’s sharing the darkest parts of his life. He admitted wryly, though, that playing his latest songs for his wife for the first time “was not an easy night at the Showalter house. Like, ‘I just wrote a song about you fucking up my life, what do you think, babe?’”

“Luckily, she is the kind of partner that understands why I needed to write it. I think that when you are in a relationship with a creative person you know that this shit is gonna come out on a record eventually,” he said. “My wife is not a villain and I’m not a villain. We are both just people that hurt each other. I really want there to be this justification to it all. It’s not just being sad to be sad or being mopey to be mopey or whatever. It’s like bad stuff happens but I am still gonna be here and my life is still gonna be here. We’re not going away. We are not gonna let this get us down.”

Lest I focus too much on the drama behind the music on Heal, let me emphasize once more how that music acts as an uplifting counterpoint to what Showalter is singing about. Showalter said his goal on Heal was to “be like fucking Conan” — whether he was referring to pre-Terminator Schwarzenegger or post-Tonight Show O’Brien, the sense of energized and redemptive fury translates in the muscular, hook-laden music.

“If this would have been like an Eliott Smith record, I couldn’t even have gotten through it. Man, I would have reached for the bottle of pills and mellowed out in a bath until I slipped in,” he said, again sounding far more chipper than his actual words might indicate. “This record is me standing on a cliff with, like, this thunderstorm of darkness and bad experiences. I could either jump off the cliff and give in or I could just put both middle fingers up in the air and be like, ‘Fuck you! I am gonna fight you. You are not gonna destroy me.’”