Why Are We So Disappointed by the Unmasking of @Horse_ebooks? 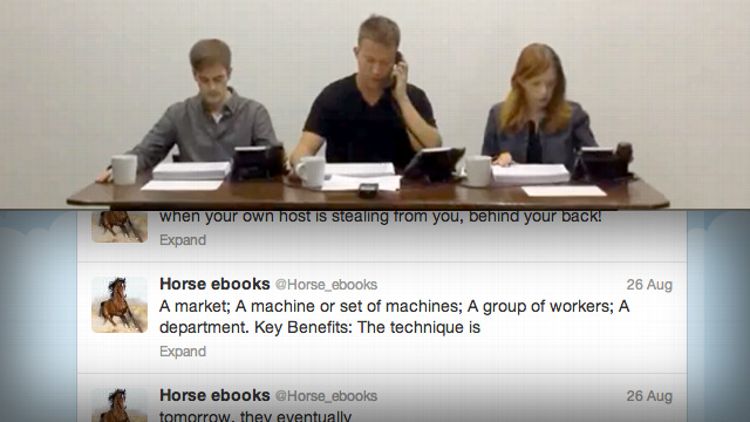 This is what happens when you look a gift horse in the mouth: You find two savvy Internetters, one from BuzzFeed and the other formerly from Howcast, inside. @Horse_ebooks was an immensely popular Twitter account that, taken at horsey face value, posted what appeared to be random snippets of e-books in an effort to hawk them while slipping under the spam police’s radar. It amassed over 200,000 followers who were charmed by its oddly poetic fragments, like “Grueling, pre-dawn jogs? Lettuce-leaf”; its appeal defied explanation, but the more of it you read, the more you felt like you understood its special house blend of humor and existentialism (“make a beautiful lime,” “You constantly misplace your house”). The New Yorker‘s Susan Orlean (also the author of The Orchid Thief, on which Adaptation was based) broke the news that the most prime real estate in all of weird Twitterland was not an SEO bot but the brainchild of Jacob Bakkila and Thomas Bender. The account was part of a duo of conceptual art pieces, the other half being YouTube channel Pronunciation Book; Bender and Bakkila have timed this revelation in accordance with the launch of their new interactive video project, Bear Stearns Bravo. Pronunciation Book has been counting down for the past 77 days to Bear Stearns Bravo’s debut, but if you were already feeling let down by the fact that Horse_ebooks’s brilliance wasn’t an accidental Internet event, being asked to pay $7 to contribute to someone else’s art project didn’t make you feel any better. We should have anticipated this and prepared for it, but we didn’t. We were dumb. We were in love.

Horse_ebooks’s impact echoed in web chambers far beyond its stream: It inspired comics, T-shirts, Tumblrs, and fan fiction. It was, we sometimes suspected, too good to be true, and it wasn’t as if we didn’t spend some time trying to trace its origins or locate its founder — but still we believed. Gawker tried its hand at finding the “Russian spammer” who originally established the Horse-Ebooks.com domain in 2009, noting not only that certain aspects of its Twitter behavior had changed beginning in 2011, but that the “human being behind Horse_ebooks could either intensify or diminish its myth […] Fans would be debased, transformed from connoisseurs of sophisticated anti-humor to the unwitting cash cows of some Russian mastermind.” The account, we now know, had been handed over by the spammer to Bender and Bakkila six months before the article was published. At the Fitzroy Gallery in New York yesterday, Bakkila and Bender answered questions about their project, which had been a carefully guarded secret for nearly four years. A sign at the gallery mentioned Bakkila having “performed as a spam bot” during this time; he wasn’t lying when he tweeted as Horse that he was, as you might know, “a full time internet.”

We should all be impressed at how masterfully we were duped, but instead many of us are left feeling resentful. It’s sort of reminiscent of another hoax, the one about Kenji, the robot who learned to love and then freaked out one of the interns at his lab by hugging her too much and refusing to let her leave his cell. We’re fascinated by the idea of an emotional relationship between human and machine, and Horse’s tweets were at once perfectly robotic (“Unfortunately, as you already know, people,” “Who Else Wants To Become A Golf Ball”) — truncated and strange excerpts from self-help books and other electronic missives you wouldn’t recognize — and downright deep (“Avoid situations,” “we shall and we will and we will and we shall and we do and we care and we live and we love and we care and we shall and we care and we”). That its masterminds have beating hearts is evidence against the mysterious phenomenon we all believed existed for so long, a robot with a heart all its own. It’s hard to imagine that we would have bought into that, as attuned as we’ve become to watching others get Catfished. What did we want from the electronic-book-snippet cyborg we thought we knew and knew we loved? Maybe it was reassurance that something good could come out of the bothersome malevolence of rapid-fire web marketing, that we could find wonder, mystery, and profundity deep within a machine that usually busies itself with trying to pry money out of our PayPals.

Horse_ebooks seemed to give itself to us altruistically, never really expecting us to buy anything: like a robot perfectly wired to understand us without demanding anything in return, and without the capacity for betrayal. Well played, Bender and Bakkila. If nothing else, you’ve given us a way to figure out what’s at the core of our grief. We wanted, as the famous Romantic poet White Zombie once wrote, to have found something more human than human, a phantom in a box. We’ll just have to keep looking.

Fox Snaps Up Gotham Series, the One That Removes All Traces of Batman

Nobody Give Kanye West Money to Run a Fashion Line