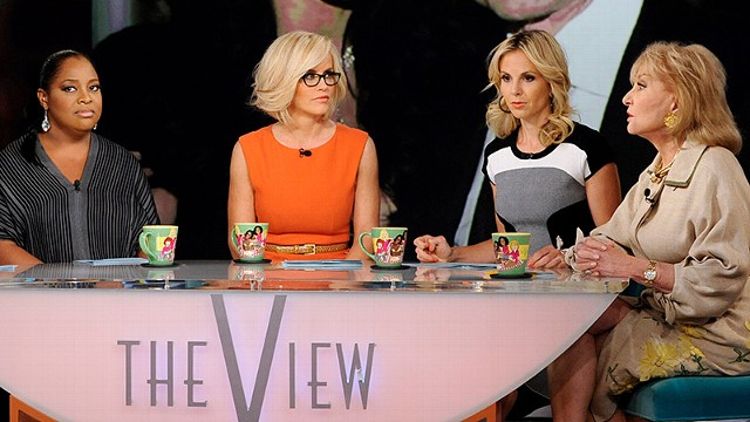 Now that Elisabeth Hasselbeck, very good Survivor player and gluten-free conservative, has vacated her seat at The View, Jenny McCarthy is moving in. Despite the rumors that Hasselbeck was ousted because her right-wing coffee talk alienated viewers, it looks as though ABC is in a gambling mood. McCarthy is now as known for her controversial autism-cause theories and treatment regimens as she is for being the hottest woman you’d ever seen when you were in eighth grade.

McCarthy in plaid, so fun-loving and free. Her career has been marked by some weird choices, abandoned pilots, and critical failures. Her beauty combined with a willingness to engage in toilet humor, a self-deprecation mechanism that marketed her as the flirty blonde incarnation of a teenage dude, remained alluring despite the fact that her cinematic track record was sort of lousy. After the publication of her first book on autism, Louder Than Words: A Mother’s Journey in Healing Autism, in 2007, most of McCarthy’s publicity has come from advocating against vaccines, which she claims caused her son’s autism, and defending her views against critics, who tend to point her directly to the argument-killer of medical science. McCarthy’s plight is heartfelt and there’s no doubt her struggle to cope with her son’s illness has been tough (she told Oprah in 2008 that it was a contributing factor in her divorce), but the ramifications of the anti-vaccine movement, a realm in which McCarthy has been a major player, are scary and potentially extremely dangerous. There is a website called “Jenny McCarthy Body Count” that attributes 1,170 preventable deaths to Playboy’s constant friend alone.

It’s kind of mystifying that McCarthy has achieved so much credibility on this issue. Hasselbeck was never considered dangerous; she was simply outspoken and easy to mock. McCarthy’s platform is uniquely equipped to engage a particularly vulnerable demographic — parents, and specifically parents who are desperately seeking help. Autism has either increased or our awareness of and ability to diagnose it has, or both, and there are few aspects of our cultural dialogue on it that aren’t riddled with controversy. The spectrum is vast enough to provide for many different experiences of autism, not all of them negative, but with an estimated 1 in 88 children receiving an autism spectrum diagnosis, it’s one of the most common parental paranoid topics you encounter on Internet baby forums and dance around in conversations with your pediatrician. It plays on a deep-seated biological worry that resides in your lizard brain to protect your offspring against all harm, no matter the casualties.

Of course, the real problem with McCarthy’s argument is that doctors have discredited the link that props up her entire theory and she’s risking other children’s lives by advising parents to skip vaccinating their kids. Because the cause of autism and a cohesive treatment plan haven’t yet been determined, though, her organization Generation Rescue’s prescription of metal-detoxifying chelation therapy, behavioral therapy, supplements, and dietary changes are extremely seductive. There seems to be a plan of action offered under the hopeful header “recovery,” and it’s exactly the kind of thing you would want to see while clutched in the fist of the darkest fear imaginable. It’s supportive and proactive and behind it all is someone whose familiarity and affability (the playfully stuck-out tongue; the girl you used to pal around with who got earthy and protective after she experienced the profundity of motherhood, chatting casually with you about her pregnancy in Belly Laughs: The Naked Truth About Pregnancy and Childbirth). If the vaccination issue could be erased from McCarthy’s activism archives, replaced merely with a list of options to explore for parents who feel lost, her cause would be noble. She also would have slid into The View’s panel buzzlessly, which would have probably cost her the job.

Hasselbeck’s new home at Fox & Friends — where she will replace cuckoo lady Gretchen Carlson — was predictable. (As Joy Behar might have said, “Who cares? And so what?”) But with Barbara Walters retiring next May, it makes sense for the show to plug the most incendiary cohost possible into The View, drumming up as many cross-postable items on the morning jabber as they can. It’d be a debate that’s well worth having, if only to acknowledge the rift between the difficulties of the disorder and our changing approaches for how to cope with it; but in this case our fear makes us highly susceptible to interpreting misinformation as truth, because real answers are so hard to come by. Reports of measles and whooping cough indicate that McCarthy’s point of view is resonating with parents and altering the medical landscape in ways we may not yet foresee. Some diva clashes are great, but most of them don’t have the power to do more harm than can be undone in a Saturday Night Live sketch. McCarthy knows how to be appealing, and she knows it well. There is an element of the real to her (and a couple of fake elements, of course), a humor and spontaneity that may well be a family trait, but just remember: Trust your doctor over this woman in a thong of suds. Send your prayers tonight to Walters, our patron saint of temperance and sanity. Take it with a grain of salt and a slug of joe, and enjoy the view as skeptically as possible.