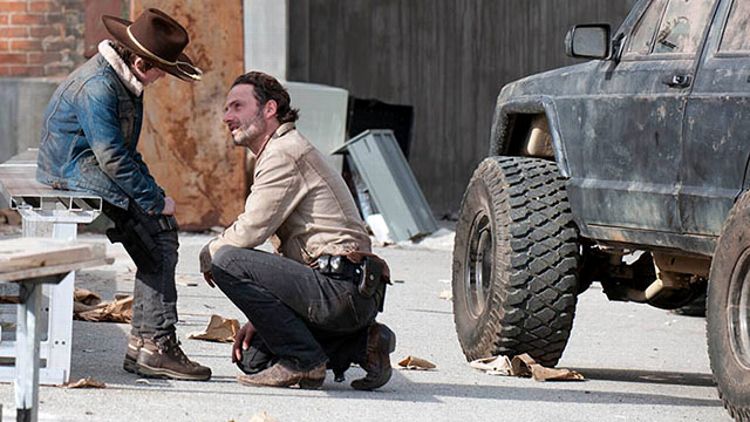 You can watch most episodes of The Walking Dead in 16x fast-forward on your DVR without missing a single plot point. Try it with the finale; I watched the whole episode in about eight minutes while eating breakfast cereal. So, after speed-watching The Walking Dead and listening to Andy Greenwald and Chris Ryan sigh wearily before pelting the show with shade, I began to consider my own disappointment with The Highest-Rated Show on Cable. All good postapocalyptic/dystopian fiction takes some basic building block of society, puts it into something akin to a snow globe, and shakes. The creator applies his or her core fictional conceit — zombies, nuclear war, environmental collapse, bird flu, whatever — to some societal dynamic, and imagines what would happen to that dynamic under the stress of the end of the world as we know it. Stephen King’s The Stand is about the way groups choose to govern themselves. Children of Men is about how central reproduction is to a civilization’s ability to maintain control. The Handmaid’s Tale is about society’s governing of the female body.

All of the societal themes that The Walking Dead could and should explore are given short shrift: The show only acknowledges race through Merle, who is basically a caricature of a virulent racist with no shades of gray whatsoever, yet the show is set in the rural South. Among our survivors are three sets of parents and children, yet we get very little feel for what it would be like to raise a child under the constant threat of the undead and the Governor’s depravity. The search for baby formula for Rick’s newborn child existed solely as a mechanism for Maggie and Glenn to be captured by Merle. You can count the number of times Rick has held his baby daughter, or even inquired about her well-being, on one hand. The Woodbury community’s allegiance to the Governor is an excellent opportunity to explore themes of freedom versus security. Instead, the way he’s portrayed — combined with the fact that people regularly walk alone from Woodbury to the prison — makes you wonder why anyone would ever stay there.

So, we’ve established that The Walking Dead is disappointing, but now let’s do something constructive. As a fan of the postapocalyptic/dystopian genre, here are some stories, all released within the last 10 years or so, that know how to shake the apocalyptic snow globe.

All these stories understand what postapocalyptic/dystopian tales are for: laboratories for societal thought experiments.

An unknown number of years after an unexplained apocalypse, thousands of survivors live in a huge underground silo that shelters them from the poisonous atmosphere. The silo is divided into several layers of industry, each responsible for a different part of the community’s survival. Over time, class divisions emerge within the silo’s society. Because living space is finite, there is one law that exists above all others: If you express to anyone the feeling that you would like to leave the silo, you are cast out. Simply saying “I wish I could go outside” could lead to ostracism and death. The overarching theme is totalitarianism; what does identity mean when everything you know about who you are, and what your history is, is manufactured by someone else? Most apocalyptic fiction lets you be a voyeur to civilization’s destruction. This story is about what sort of civilization might come after.

The Dog Stars, by Peter Heller

Could the postapocalypse be … beautiful? Sure, everyone you know has died, and those left behind live in a Hobbesian state of nature, but, if you’re like the protagonist of this story — someone who loves nature and the outdoors — then the sublime is in every blazing sunset over the Rockies; in the endless blue sky, now empty of aircraft save your own; and in the stars, at night, as you lie next to your dog, naming constellations. In terms of narrative style, this story has a lot in common with Cormac McCarthy’s The Road in that it reads as if you’re listening in on the protagonist’s inner monologue. The Dog Stars mixes long stretches of pastoral prose with moments of time-stopping terror. This novel asks, “What does it mean to find beauty in the world if you have no one to share it with?” It’s easily the most hopeful postapocalyptic novel I’ve read.

The Road, by Cormac McCarthy

The Road takes us back to our tenuous hunter-gatherer past through the eyes of a father, who remembers civilization before the calamity that killed the world, and his son, who knows only this barren reality. Nothing grows, forest fires burn for decades, and gangs of cannibals stalk the land. What would you do to keep your child alive when nowhere is safe, and life hangs on by a shred of a fingernail? The boy yearns for any kind of connection with other people, possessing a child’s trusting innocence that the father knows could very well get him killed. Perhaps it’s unfair to compare a show based on a comic book to McCarthy, but after reading this, The Walking Dead’s characterization of parents and children looks pale by comparison and like a badly missed opportunity.

We live in a male-dominated society. Y: The Last Man imagines a world where all the male mammals — every single mammal possessing the Y chromosome — simply drop dead, except for two: a young man named Yorick and his pet monkey, Ampersand. Because the world’s business and political leaders are overwhelmingly male, governments and the world economy collapse. Yet the planet is still filled with plenty of people who now have no hope of reproducing. In America, the presidential line of succession falls to the secretary of Agriculture, and the widows of politicians battle congresswomen on the White House lawn for control of what’s left of the country. The objectification of women is commonplace in our society, but, as the titular last man, Yorick isn’t merely an object; he’s an asset, representing potential survival to any group, be it a street gang or a nation, that has him.