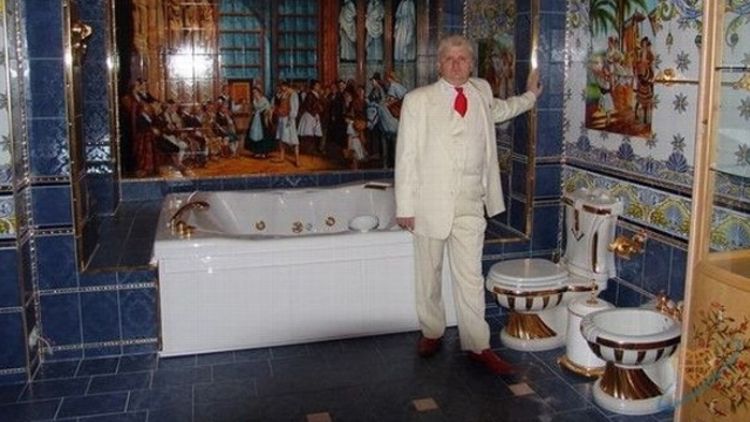 This week’s Weird Internet is a meta–Weird Internet, which is the best Weird Internet of all. Once upon a time, in the year of our lord 2009, a man posted on a Russian dating website, seeking 16- to 20-year-old virgins to marry. The ad was accompanied by pictures of the 39-year-old dude in question sitting poker-faced in various rooms of his mansion, wearing fur coats, white suits, and snazzy pajamas. His expression never changed regardless of whether he was grabbing his crotch as he leaned on an impractical bathtub or was seated on a denuded mattress underneath a canopy made of, perhaps, another denuded mattress. It was so weird, it instantly became a meme. The text of the original ad, as translated by Animal New York’s Marina Galperina, read:

Igor: Russia, St. Petersburg; Age: 39
Looking for: a young lady, aged 16-20
Who I’m looking for: My kingdom is getting larger, but no worthy Cinderella yet (without harmful habits, with good physical attributes and a presence of intellect), for transformation into a princess, capable of devotion, loyalty and love (without any intimate past, knowing what honor is from a young age). DO NOT WRITE: If you are a megalomaniac who considers herself to be the last ass on the planet; sad losers; defective items from the marriage market; PEOPLE WITH NONTRADITIONAL ORIENTATION; jealous idiots, whose discussions, advice, questions no one here needs. Don’t leave comments; I am not interested. I am not just selling my body, for I am picky. Serious inquiries only, other verbal diarrhea will not be read.
Goal: Marriage, family.

Prince Glare-Stare was plenty interesting for 2009 (though the photos hark back to 2007, according to their visible time stamps), but the plot has thickened in recent days to reflect our need for more layered web mysteries. You see, Animal New York probed deeper into the meme, known alternately as “Rich Serbian Bachelor” and “Modern Russian Prince,” after it enjoyed another resurgence earlier this week. Galperina reports that the man is named Vilhelm Ulfar Vilhelmsson — not Igor, as originally reported, and not Don Milisav Juan Gonzales Brzi, as he was identified more recently by the Daily Mail. Vilhelmsson is neither Russian nor Serbian, but Icelandic, and not only that, he’s the leader of a cult (Ulfarism, which stubbornly resists Googling, other than this bad translation of the alleged prince’s website). The author of the site, be it the meme-man or a different crazy person altogether, writes that he is a descendant of princess Anastasia Nikolaevna Romanov, which is highly unlikely. (Romanov has her own nice little weird rabbit hole, for those interested — she was executed in 1918, though there were “persistent rumors” that she survived.) Wolves are involved in the cult’s belief system, though it isn’t clear exactly how (“Wolves fatalism or religious organization Eternal Life” — damn you Google Translate!). The photos on this newly discovered wolf-centric website are just as weird as the vintage mansion shots, but for different reasons: The man pictured isn’t necessarily the Rich Serbian Prince, though he does have the same closed-mouth, dead-eyed stare. He wears business casual gear instead of royal dinner attire, and in one photo is rocking a white ponytail secured with a pink scrunchie (virgin bait, virgin bait!).

If you were looking for more visuals — because of course you are, we’ve come this far — Vilhelmsson’s Facebook profile is happy to oblige. My personal favorites are the one where he looks like an angry Father Time with long gray frizz, and a shot of him wearing his beard in a ponytail at what appears to be some sort of arraignment. He currently works at a fast-food restaurant. Obviously, something doesn’t jell here. On the one hand, there’s a strong resemblance between Vilhelmsson and the Serbian Bachelor (though he now appears about 50 pounds slimmer), but on the other hand, what happened to all of those opulent bathrooms and silken man-nighties? Did Vilhelmsson auction off his riches to a pack of wolves in order to become their religious leader? Did he meet some savvy teenager who answered his ad and swindled him? Or are these two different unsmiling gentlemen who have been accidentally linked together by chance? I tend to believe the latter, but for now, let’s enjoy the fantasy that a rich and silly man once set off into the wild blue Internet looking for love and instead found enlightenment when he became the wolf Jesus. Gawker’s on the case, but if you work hard, I’m sure you can beat them to it. Just call your buddy in Iceland and ask them to creep around their local Hlöllabátar, looking for a sad white man with a penchant for elastic hair accessories and princesses. We’ll solve this riddle yet.