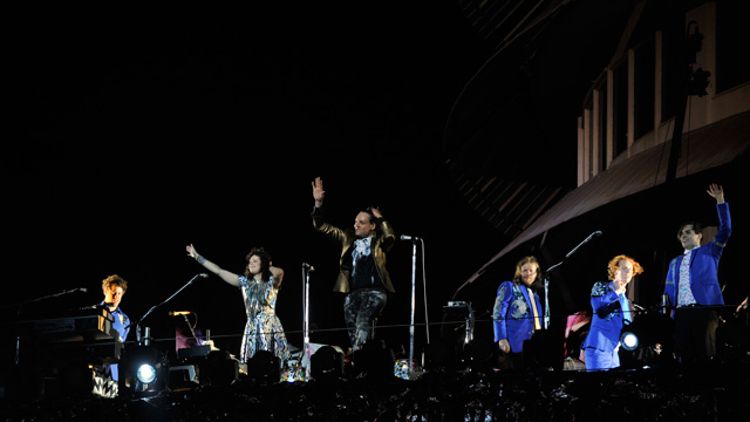 It’s been six days since Reflektor, Arcade Fire’s fourth LP, leaked, and I truly believe that most people spent the first three trying to sort out whether it’s better than The Suburbs, or even Funeral if they were feeling frisky. Maybe people are still grappling with that question, but as the workweek commenced, it feels like the latter half of those three days have been dedicated to the more serious matter of determining whether Arcade Fire is cool. And that’s been far more eventful. By the time Reflektor actually hit stores and Arcade Fire prepped to play in front of Capitol Records last night as quasi alter egos the Reflektors, here’s where I think we stood: This is a seriously uncool band trying to embrace its uncoolness, and that just smacks of effort, man. And, if we’re to trust a much-discussed review I refuse to link to, they’re probably boring in the sack because they aren’t funky and white people are terrible in the sack.

So that’s where we all stood Tuesday, as a Grammy-winning rock band that will almost certainly have the no. 1 album in the country come next week (don’t count out Trace Adkins) was preparing to play a free show in front of Hollywood’s most iconic monument to the record industry.

During one of Reflektor’s most contentious songs, Win Butler sings, “I’ve never ever really met a normal person,” and the instant response is to point out that … bro, you haven’t been on tour in a couple years, maybe you should look out at the crowd. By pretty much any metric, these were the “normals” #8212; mostly white couples, ages 24-41, missing any sort of visible tattoos or piercings and using the costume-friendly format as a chance to allow themselves to get a little weird. And I mean, a “little” — the theme was “Be a Reflektor!” and a Pinterest page was given as reference. For the most part, the costumes looked like the work of people who like the concept of Halloween but are too self-conscious to go all out. And most people ended up with the same ideas #8212; gold lamé (that’s “luh-may”), eye black, and masks made of silver tiles or broken compact discs #8212; I think I saw Tool’s Lateralus used as a medallion, but I can’t totally be sure.

All of which made a lot of sense considering the Reflektors (“You can call us Arcade Fire, too,” Butler helpfully instructed) are also about 75 percent of the way there in terms of truly pulling off what they’re intending. They somehow seem dorkier in supposed rock-star garb than they were during the Funeral days when they played in helmets. And if you think Reflektor is a crock of shit and you want to call Arcade Fire tone deaf, there were plenty of opportunities. They played on an elevated stage maybe 50 feet high — what, do they think they’re above us or something? The sight lines made it impossible to see the drummer and allowed only an occasional peek at the Haitian percussionists. Stop Making Sense comparisons were bandied about. The Reflektors wore suits that were pretty R.E.M. circa Monster, but they also really gave off a Fabulous Rougeau Brothers vibe, which would actually be the best possible costume for a Montreal band with two actual brothers in it.

Oh, and while Reflektor is ostensibly a concept album shouting down an Internet-based lifestyle, the event was populated by folks who won some kind of social-media contest. Further, it was being filmed as part of MTV Iggy’s “Music Experience 2.0” and was cosponsored by Intel. There was a booth full of laptops that weren’t even for sale, just hinging on the possibility that you might hear “It’s Never Over (Oh Orpheus)” and become intrigued by the possibilities of Pentium processing.

Yet for a supposedly preachy band, Arcade Fire in the flesh makes you wonder where exactly all your judgment is coming from. Are these normal people? Reflektor has its issues, but if you consider what it means to thousands of people instead of just one, it’s effective like an atom bomb or planting a first kiss — the intent itself is what matters, not so much whether it hits its target dead-on.

For example, the band’s much-debated lack of “groove”: You can dance to these songs only at a packed rock concert where you won’t be judged because your dance moves are about on the level of Arcade Fire’s, and that’s fine, because that’s the only place they’re going to get played. What’s the point of imagining how this would get laughed out of a Berlin discotheque faster than you can say “Discotheque” when no DJ would ever think to spin it in the first place? Prior to the encore, the only non-Reflektor song it played was “Haiti,” a reminder that, yo, sometimes the band sings in French and it visited Carnival because Régine Chassagne was born there. And also that Arcade Fire has been a group of silly dancers for a decade now.

“Haiti” segued into “Here Comes the Night,” Reflektor’s most ambitious and clearly Caribbean-influenced number. They shot off cannons of reflektive confetti toward the end … which lasted like two minutes and is totally not the kind of thing James Murphy or Brian Eno would do because … well, would they ever have the opportunity? Yeah, Arcade Fire skew kinda “parent-y,” at least in relation to the aforementioned artists, who strive to be more of the cool-uncle types.

I wondered why Arcade Fire was spending this week in Los Angeles. I don’t think anyone views it as a Montreal band anymore. In fact, most people seem more intent on pointing out that Win Butler was raised in Texas, either as a way of calling him a poseur (in the mid-’00s, “he’s not actually Canadian” was a way to attack someone’s cred) or more authentic, because, ugh, Texas. Maybe Reflektor is the Arcade Fire’s “L.A. album,” in that Los Angeles similarly gets criticized as “fake” from the outside but once you inhabit it you realize that calling out the fakeness of others is just a pose as well. Is Los Angeles a place you can appreciate only after deciding being seen as cool is someone else’s problem? Is Reflektor the same way? Reflektor may be flawed, but it’s the kind of big statement best appreciated when you don’t want to sweat the small stuff anymore.

Filed Under: Arcade Fire, We Went there