We Have to Go Back … to the Panel: Highlights of ‘Lost’’s 10th Anniversary at PaleyFest 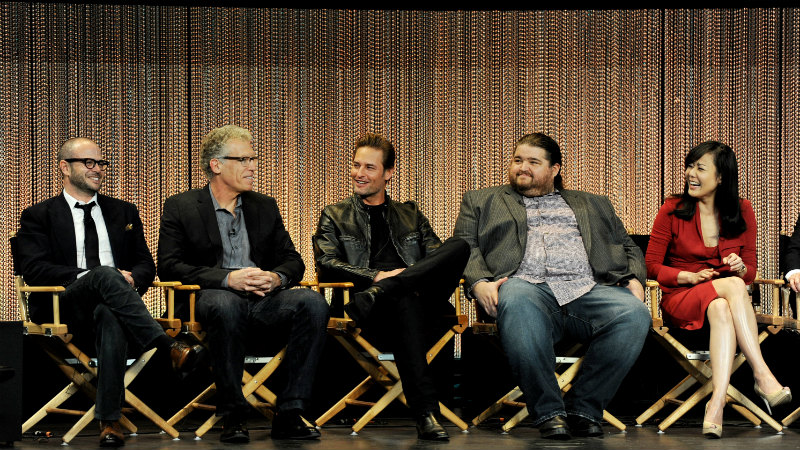 Can you believe it’s been 10 years since the Lost pilot aired? What’s that? Considering the show ran for six seasons, feels like it’s been gone for a while, and has been endlessly picked over ever since, 10 years actually seems about right? OK, well, forget your non-histrionic understanding of the passing of time for right now. It’s been 10 years since the pilot. Which means it’s time for another juicy Lost panel.

Over the weekend, at PaleyFest 2014, comedian and noted Lost-head Paul Scheer moderated a spirited discussion between showrunners Carlton Cuse and Damon Lindelof, plus a fun grab bag of cast members: Sawyer, Hurley, Sun, Boone, Megan, Shannon, Desmond, and — drumroll, please — an all-grown-up Walt! The chat was erratic in a good way (there was a running joke about chicken dinner = sex), and we got some fun on-set tales. Like:

• The first time they built that raft from the first season, it sunk. The second time, it went way too fast. This was, apparently the Goldilocks of rafts.

• All that rain? It was almost never written into the script. Rather, the natural climate of Hawaii conspired to create enough drama left and right, so Jack Bender and the show’s other directors were left to fold in the meteorological situations as they arose. A whole new degree-of-difficulty rating. Good work, Mr. Bender & Co.

• One time, Terry O’Quinn hitched a ride in the back of a woman’s pickup truck, from the set to his house … only, the woman kept on driving back to her house instead. When O’Quinn politely inquired as to why, she calmly explained: “I have to show you to my husband!”

Also: You thought every last little bit of Lost mystery had been chewed up and spat out by now? You thought wrong! During the audience Q&A, one chunk of new information was actually semi-uncovered. It was about the outrigger chase from Season 5, and the mysterious identity of the other group on the water. (FULL DISCLOSURE: I barely remember this happening?) Lindelof explained that it was going to be “definitively answered who was on the outrigger in a perfect, very satisfactory way,” but then all the writers decided that, while “this is a cool answer,” “what’s much cooler is not answering this question. And we all looked at each other and said, I shit you not, ‘Years from now someone is going to stand up and ask us about the outrigger …’ That is the truth. The scene exists, it’s on paper. And years from now, for some excellent charity, we’ll probably auction it off. But we do know the answer.”

Summing up the whole ethos nicely, Lindelof said, “I have to give you some level of satisfaction without answering the question, which is the Lost way.”

Watch the whole hour and eight minutes for yourself below: