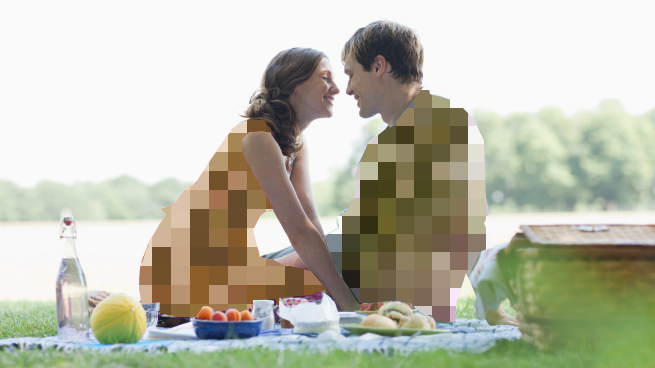 Dating — so tricky! You’re telling these quality fibs about yourself, maybe conveying an actual sense of who you are/who you hope you are deep down, plus you’re listening to a whole other person’s life story while trying to figure out what they’re really about. That’s the script in an ideal world, anyway — a landscape like the one VH1 is trying to create, where you don’t have to be distracted by wondering what that other person looks like without all the fabric covering their skin. Enter Naked Dating (supposedly a working title, but c’mon).

“Each episode will feature a man and a woman as they each date two different — and naked — suitors,” The Hollywood Reporter writes, making sure we didn’t forget the part about the naked. “The series will explore the art of romance — free of preconceived notions, stereotypes and, yes, clothing. At the end of every hourlong episode, the two romance-seekers analyze what they’ve learned from their dates — and themselves — before deciding whether to move forward with their potential love matches.”

Is that a trace of a soul we’re detecting in this reality show called Naked Dating on the network that gave us reality shows about falling in love with Bret Michaels and Flavor Flav? “At first, this seems like a show that’s all about a noisy, provocative hook — and we embrace that,” says Susan Levison, VH1’s executive vice-president of original programming and production. “But when you go deeper, it’s really about something that we can all relate to — the search for true love. It’s also a series with heart and masterful storytelling — both earmarks of an engaging, must-watch show.”

One could argue that things like heart, masterful storytelling, and TRUE EFFING LOVE don’t necessarily come to the fore when a brain is preoccupied by the presumably bodacious body of an enticing stranger and potential sexmate, but someone else — executive producer Howard Schultz, say — could argue otherwise. Schultz thinks of it more as “a provocative idea with a back to basics philosophy” and “a social experiment to provide a fun and entertaining look into how men and women interact when they bare all.” We’ll see, buddy. We will see.

Of course there could be something beyond shock factor here. I’m guessing that nude beaches and nudist colonies (never visited or lived in one, respectively; waiting to see how Naked Dating shapes my thoughts) tend to be populated more by Soul Searchers and Don’t Give a Damns than Spring Breakers Looking for Action, but still — is there any way this show won’t be packed out with new JWowws and Situations? I mean, the production company did MTV’s Next.

Interestingly enough, there’s been a spate of no-clothes shows lately. Discovery has done Naked Castaway and Naked and Afraid, Syfy’s got Naked Vegas, and TLC airs Buying Naked, “a real estate series featuring nudist couples in search of a clothing-optional home.” VH1 has ordered 10 episodes of Naked Dating; it’ll film in “a remote exotic locale.” The show will be edited “according to network standards,” which could mean pixelated no-no parts, blurry bods, old-fashioned black bars, or, if we’re on our best behavior and very extra super lucky, Arrested Development–style blue-outs.