Welcome to Vernon: Touring the Inspiration for the Real-Life Industrial Hell-town of ‘True Detective’ 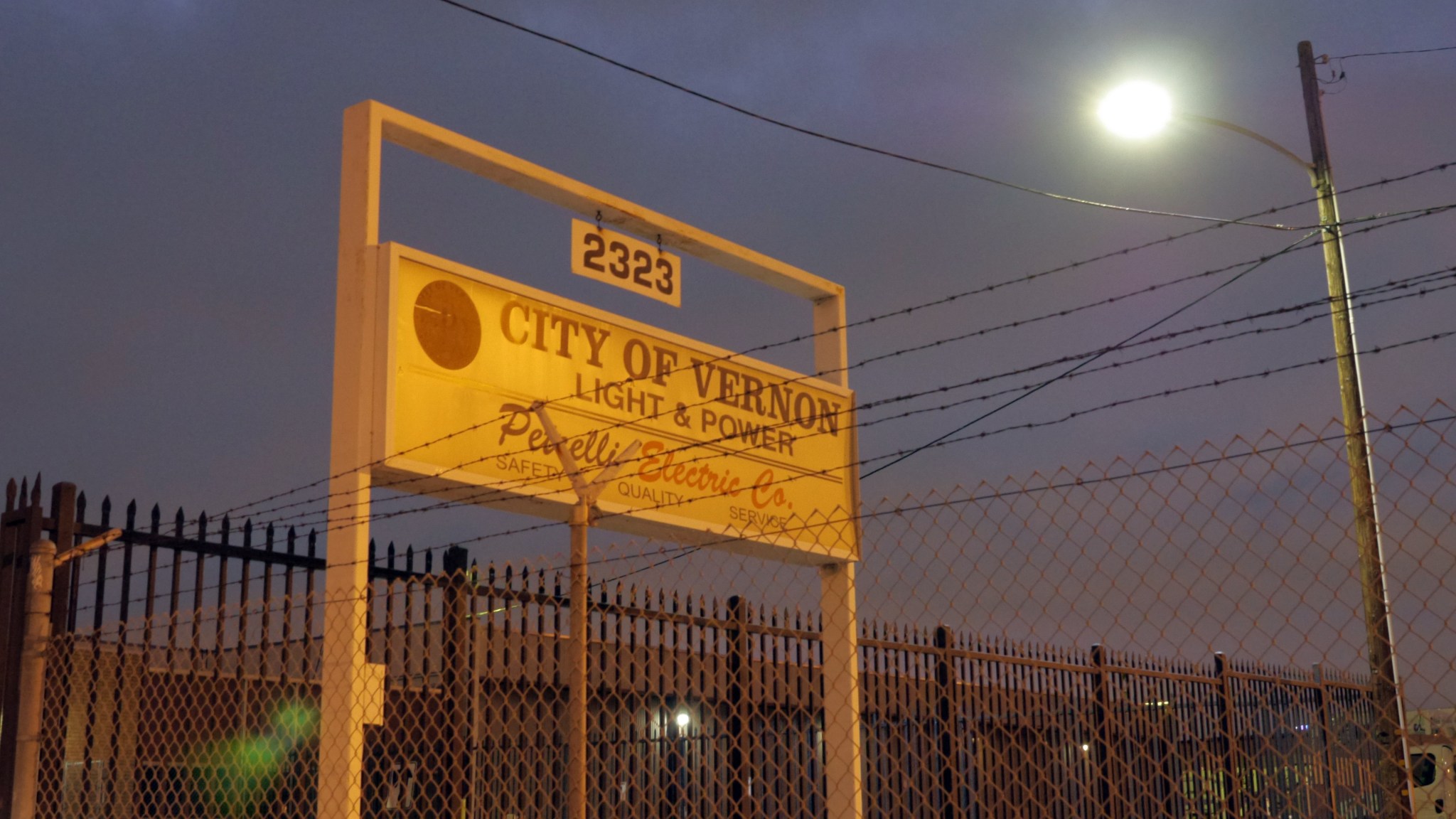 My first trip to Vernon, the city that inspired True Detective Season 2’s fictionalized “Vinci,” was on a whim. At dinner, I told a friend about my intention to drive to the nearby city, which is just five miles south of downtown Los Angeles. “Why would you want to go there?” he said with genuine shock. “It’s really creepy.”

And he was right! After dinner I creepy-crawled through Vernon late at night. I was clenched with dread for the 20 minutes we spent driving through the industrial city that spans just five square miles. Vinci is loosely modeled after Vernon — a former Mexican-American War battleground that developers in the early 20th century decided to turn into a purely industrial zone. With three railroads running through the area, it became a hub of production — bordered by the optimistically titled “City of Commerce” and close to “City of Industry.” While Commerce has nearly 13,000 residents, Industry is “an industrial suburb” — population 219. Vernon is even more sparsely populated — 112 citizens total.1 Vernon once housed a baseball stadium and even had its own minor league team, the Vernon Tigers. Since its inception, Vernon has been marked by a shady reputation — many have wondered whether it’s run by a corrupt family dynasty (the Leonis family) and whether it deserves its city status at all. And the city has endured a raft of political scandals — including voter fraud, misappropriation of public funds, and a history of questionable evictions. The Vernon aspect has been one of the things that has kept me engaged in TD‘s second season. If there’s one thing I love, it’s fictionalized California corruption, even if I can tell exactly what parts of his dog-eared copy of Mike Davis’s seminal Los Angeles critical history, City of Quartz, Nic Pizzolatto is pulling from. 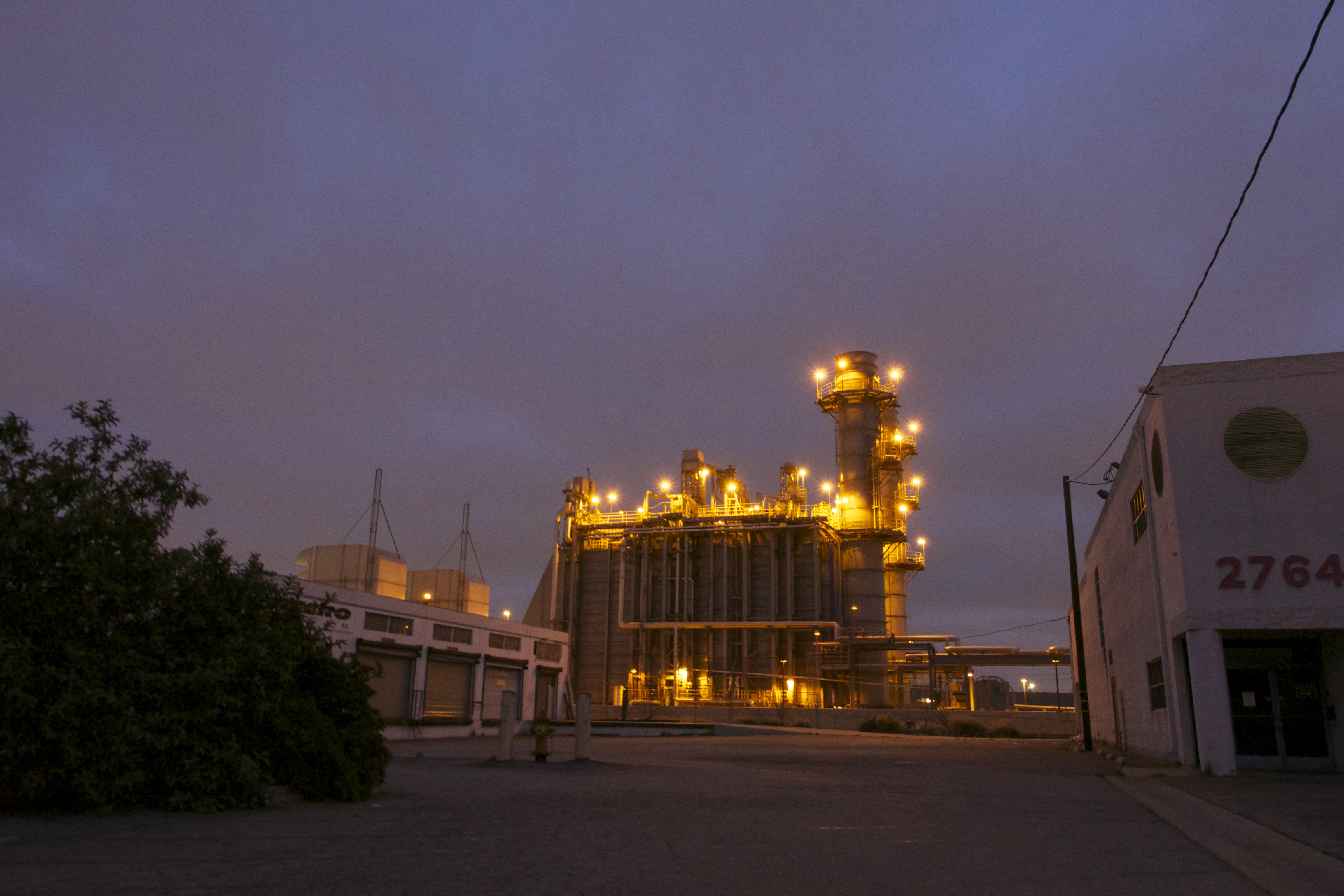 But there are differences here. There is no casino in Vernon — the Vinci Casino is presumably the nearby Commerce Casino. The primary industry in Vernon is meatpacking — a terrifying bucolic mural adorns the side of the Farmer John building. There are also paper companies, clothing mills, and glass and plastic manufacturers. Most of the city’s residents are employees who live in government-owned housing. The house where Colin Farrell’s Ray Velcoro lives is in a row of small bungalows near the Flowserve Corporation, “One of the world’s largest manufacturers of pumps, valves, seals and components to the process industries.”

There are a few churches, a water tower, an elementary school, a library, and a handful of bars, restaurants, medical clinics and stores. But for the most part, Vernon is factories, big hulking blocks pumping smoke. The city’s motto is “Exclusively Industrial.” While there are plenty of people in Vernon — working at its many factories — the parking lots are locked behind security-controlled gates. There are people in Vernon at all hours, you just can’t see any of them, giving it the otherworldly feel of a town solely occupied by large machines. I pause by a giant unidentified mechasaurus, glittering with lights so it resembles an enormous bioluminescent deep-sea creature. Without warning, the machine makes a pressure release sound that catches me off guard and I yelp out loud. It sounds like a dragon exhaling. On the way out of Vernon we pass an eerie-looking bar with a blue neon sign, resembling TD‘s David Lynch-ian bar, Black Rose — proof of life in Vernon.

On my second trip, I am more prepared — or so I think. I have come with a camera and a friend to take photographs. But when we get there I realize there’s an issue I hadn’t considered: There’s nowhere to park in this town. Drivers can’t even pull over on almost every main thoroughfare. Vernon is virtually unpeopled, and those who are there are hidden behind those company parking lots and their security gates. There is no expectation that random travelers would stop in Vernon — there are no real attractions to stop for. And so there are no zones in which to pull over, keeping the wide roads clear for the Mack trucks that drive through the city day and night on their way to deliver and pick up goods from the factories. As an anxious driver, I am terrified of the giant trucks whizzing past me in all directions. My attempts to slowly trawl the streets so my companion can try to take pictures are waylaid by the enormous machines honking at me. I try to pull over in front of the Vernon police station to get a shot of the sign. A truck nearly crushes me and I start melting down like Dionne in Clueless when she accidentally drives onto the freeway. 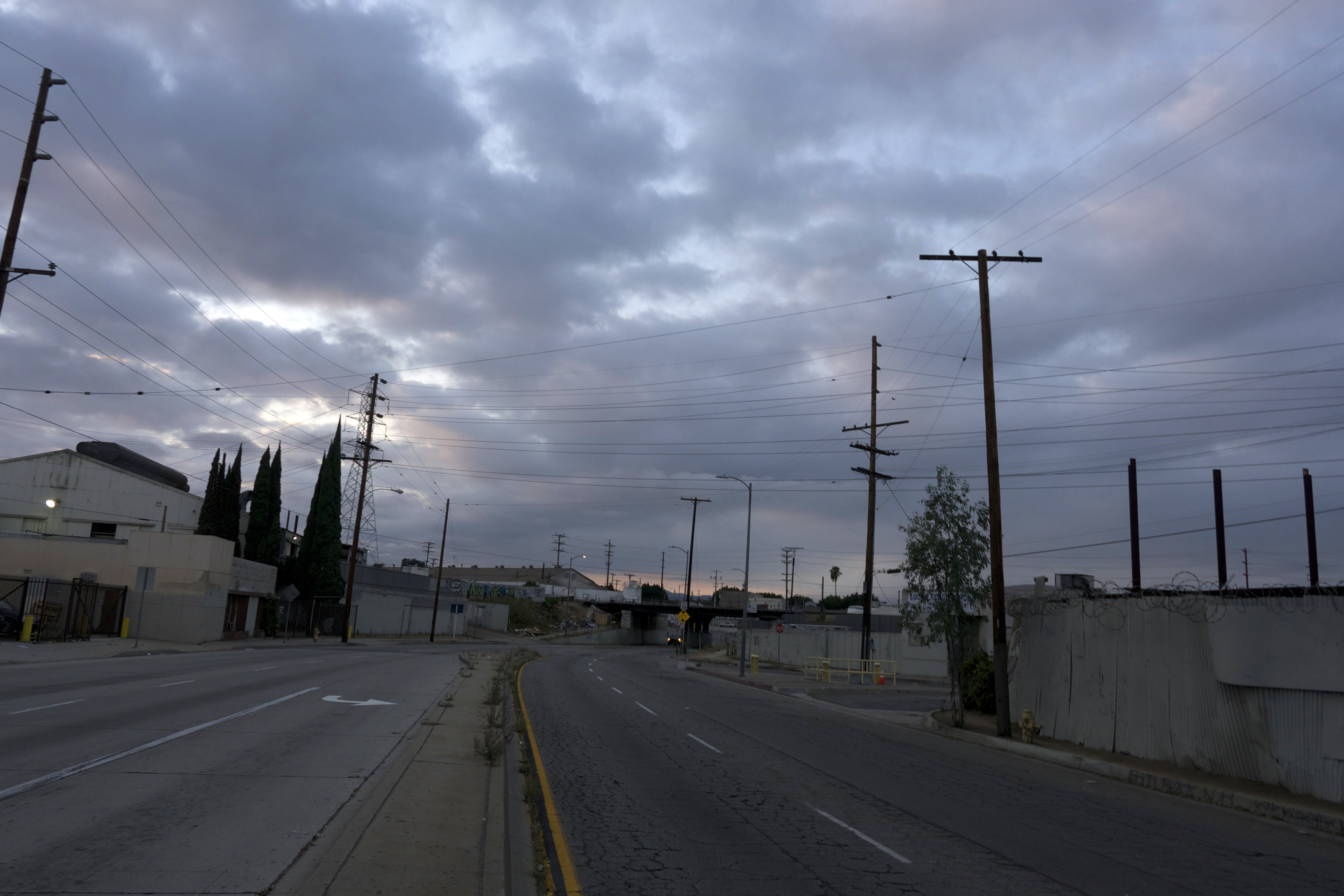 The streets in Vernon are wide, but a far cry from the spacious roadways of the L.A. suburbs. Vernon’s feel more like a highway, a thoroughfare between the industrial interzones of the city limits. I had just assumed taking pictures in such a deserted-looking place would be easy, but I was wrong. Even parking in an unsigned alleyway, I never lose the fear in my gut that comes with being in a place where there are no people to be seen anywhere but in cars. Maybe that’s why Vernon feels so unsettlingly alien. Unlike L.A., there are no people living on its strangely clean and empty streets. We manage to get a few good shots while idling at traffic lights, but I am too paranoid to brake in any of the no-parking zones, worried that I might get pulled over by cops for disobeying the laws and also that one of those huge trucks will crush and then envelop my car. We park briefly in an unsigned alleyway to jump out and get a shot of the scary painted anthropomorphic oil barrel man on top of a recycling center, which my friend dubs “The Yellow King.” Sidling along the building on its narrow, weedy concrete margins, I am terrified of the vehicles whizzing past. It feels like a Mario Kart level come to life. 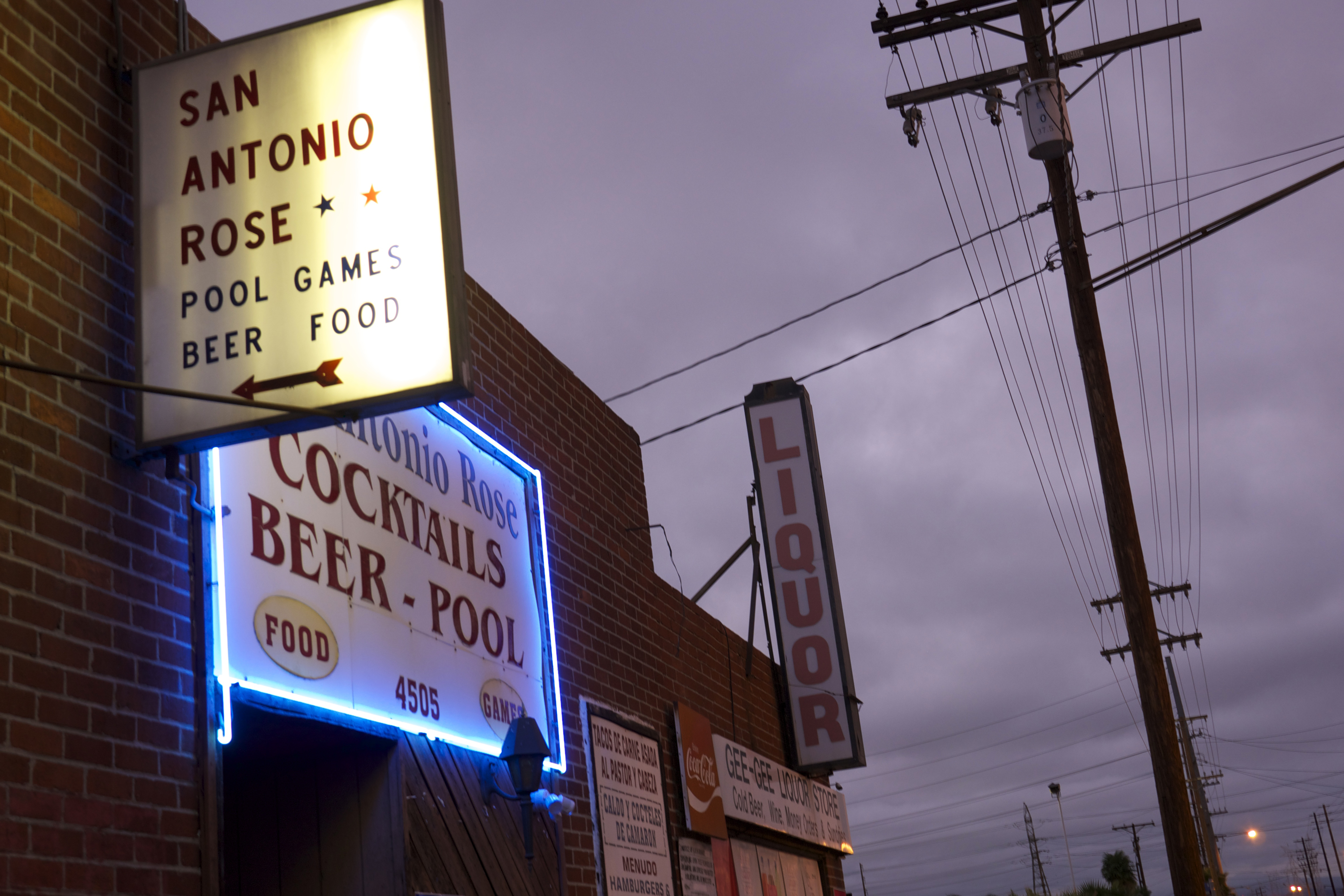 I suggest going to the one place where I know there will be parking — the bar. And there is, a whole hour’s worth of it, on a side street that dead-ends into a factory lot. I’m curious how much it will resemble the Vinci dive bar where Vince Vaughn’s Frank Semyon and Farrell’s Velcoro hang out. But it’s like any dive bar — dark, dimly lit, and smelling like beer. There are a few daytime regulars playing pool. The staff is gearing up for a nighttime event advertised with a poster on the door: “Liz’s Birthday.” I give the bartender my hard-boiled drink order: a 7UP with ice. There is no stage, and no sad chanteuse like Lera Lynn, the singer in residency at the Black Rose. There is, however, a jukebox with a glimmering border of turquoise and purple LED lights. A live version of “La Pelicula” by bachata group Aventura is playing when we walk in, which segues into “La Diabla” by Romeo Santos, Aventura’s breakout solo star. The TV mounted over the bar shows an exhibition game between Barcelona and the LA Galaxy. It feels like any Los Angeles dive bar where people come in to get a drink after work and watch sports. It’s not so spooky after all.

The bar owner, sensing that we are not locals, asks what we are doing in Vernon. I say “True Detective” and he nods with a shrug, making me think we are not the only local tourists who have come here in search of Vinci. After sundown, we cruise the streets a little while longer, stopping for directions in a turnaround in front of the giant dragon machine, which once again unexpectedly exhales and scares the living hell out of me. Vernon has cleaned up shop since the 2006 fraud scandal, and its corruption by the powerful few bares no reflection on the city’s small population or its large commuting class of factory workers. The city’s halo of creepiness is an illusion. It’s just a place where people work, mostly. But there’s something about those empty but heavily trafficked streets at night that summons the ghosts of other industrial towns, the genuinely deserted ones. With its grayscale color palette, floating beams of light, and rows of signs with frozen-in-time graphic design tracing history from the 20th century through the 21st, Vernon can be beautiful, too.