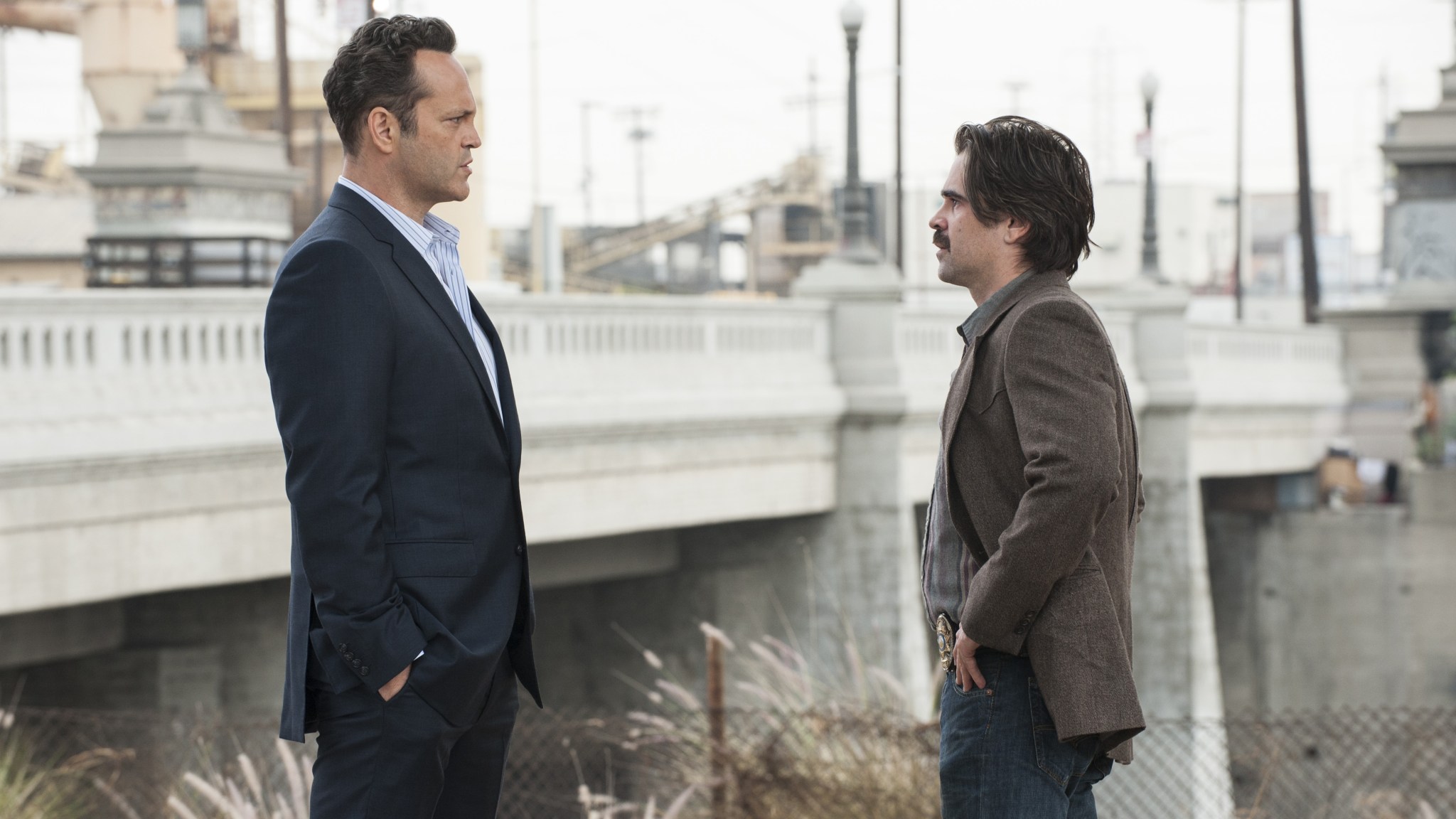 There is something attractive about radically transparent people. If you go into a bar and ask three strangers how they’re doing, and two say “Fine” but one says “Terrible,” who is the person you’re most interested in talking to? But transparency is not the same thing as honesty — after all, what’s being revealed is not always the truth — and it certainly isn’t the same thing as goodness. With all due respect to the finer points made by his ex-wife (played by Rectify’s Abigail Spencer) in the parking lot of that most California of box malls, Detective Ray Velcoro is an attractive character precisely because, in the words of his lieutenant, he accepts that dualities must be affected to serve the public interest.

“I really do,” responded Velcoro to that assessment, with Colin Farrell giving one of the most intentionally funny line readings of the season so far.

Nic Pizzolatto understands this as well. He knows that who we are is always changing. Pizzolatto writes people who are always shuffling who they are, who they show themselves to be, and who they are afraid they might be. He knows that characters who play characters are the best kind of characters. In the first season of True Detective, a preacher told his flock, “This world is a veil, and the face you wear is not your own.” To Pizzolatto, this is gospel.

True Detective Season 2 came alive in those office meetings between Velcoro, Paul Woodrugh, Ani Bezzerides, and their bosses. If the first episode was all brood, mood, and ideas of fatherhood, the beginning of “Night Finds You” had liftoff. We learned more about the corruption of the city of Vinci, the various angles being worked by the State’s Attorney, Mayor Chessani, and Frank Semyon. This episode gave our characters objectives, put them to work, and crashed them into one another.

By the end of the episode, we became aware of each character’s duality. All three law enforcement officers are looking for Vinci city manager Ben Caspar’s killer, and each has a separate “confidential mandate,” though most of them hardly labor to hide who they are or what it is they’re really doing. All you need to do is ask, and sometimes it doesn’t even take that.

Frank Semyon is a bird of the same feather (or mask — more on that in a bit). “Night Finds You” opened with Vince Vaughn’s character lying in bed with his wife, Jordan, played by Kelly Reilly. He had a madeleine episode while staring at a water stain on his ceiling, which prompted him to tell a story about being locked in a basement for days on end by an abusive, alcoholic father. It was a Very Symbolic Anecdote, the symbolism of which he went on to explain. “Sometimes I wonder how many things you have like that … that you don’t tell me about.” Don’t worry, Jordan. I’m sure it will come up at some point.

Frank is a gangster going straight, willing to be a gangster again if it keeps his chances of going straight alive. He is a very self-aware heavy, and it’s interesting to watch an actor like Vaughn, known for his motormouth swagger and bullshit artistry, play someone going through such a crisis of confidence. Vaughn’s reading of Frank is that of a person who is not entirely sure if they’re really alive. There are flashes of the Wedding Crashers con man in the scene in which Frank braces the bookie on the side of the road, but that’s just a bit — something that was needed at the time. Ultimately, Frank knows he’s up to his neck in it. At one point, early in the episode, after realizing the extent of the screwing he just received from the late Caspar over a land deal, Frank asks two members of his crew: “Am I diminished?”

Most of these people are in touch with what they really are — sometimes to a comical extent. Rachel McAdams is playing Ani Bezzerides like she is a coiled spring, but give the lightest of prodding and this character will Slinky her feelings down the stairs. She willingly tells Rick Springfield’s delightfully disturbing shrink1 that she comes from a messed-up home life — the only one of five kids to “make it” out of a hippie commune called the Good People. If you ask her why she carries knives, she will tell you it is to make any would-be attacker bleed out. Maybe she got her sense of mystery — or lack thereof — from her totem-’splainer father.

This is the case for all of our badges. If you spend a day vaping in Ray Velcoro’s face, and do him the solid of dropping him off near enough to his apartment that he can walk home, he’ll tell you whatever you want to know about his marriage, his assault on the man suspected of hurting his wife, the rumors that he’s on the take, and the suggestion that he now “likes to get wet from a number of bad habits.” Paul Woodrugh won’t talk about the desert, and just wants to get back on his bike, but his girlfriend sees right through him.

All of them are such open books, but each with some secret still stuffed in the binding. This is the truth about vulnerable people — you can never really know them. The confessions and the self-deprecation can often be genuine, but, more often than not, the fireworks are only there to distract you from something hiding in the darkness, something they might not even have a handle on themselves.

We got a peek at those shadows in “Night Finds You.” We saw Ani falling down an Internet pornography rabbit hole. It started off as work and was going somewhere in the vague vicinity of pleasure, though Ani doesn’t distinguish bad habits from good, so what’s the point of placing a value judgment on her browser history?

Ray’s darkest secret is that the act of vengeance that set him on this path of corruption may have been for naught — or at least not for his biological son. He seems to be coming to terms with it toward the end of the episode, but even his half-admission of the reality of his paternity claim is brushed aside by the man taking his confession (he’s also the man who owns his soul). Ray just wants to be free. 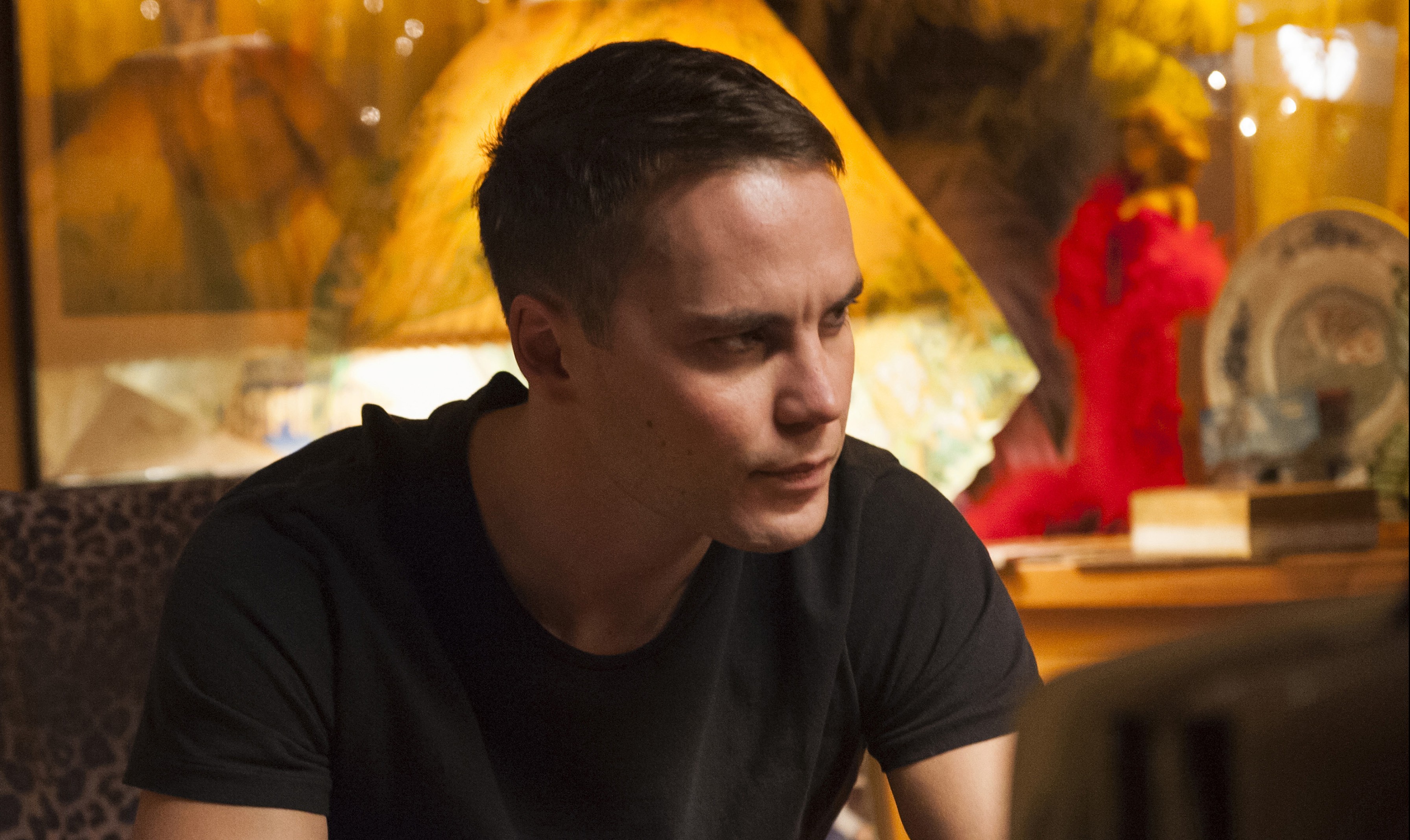 And then we have Paul. Mama’s boy, try-hard homophobe, possibly hiding something about his own sexuality,2 dealing with emotional and erectile dysfunction at home and the casualties of war in his head. We see him, at night, like Ani, pulling down that veil — staring out at male hustlers on the street from his balcony — but not quite revealing himself yet.

These are our “heroes,” hardly a whole hero among them. And that’s why this season — despite warranted critiques that it’s hammy, convoluted, and pretentious — is, so far, so damn interesting. Sure, I want to know the identities of the bird-mask killer and the woman wrapped in bandages in Dr. Pitler’s clinic. And I can’t tell you how invested I am in the enforcement of environmental regulations in Vinci. But in just two episodes, we have ourselves four very interesting, very damaged characters, and what this show will do with them is far more compelling than high-speed rail corruption. Remarkably, this show is shaking off the Yellow King. Last season’s MacGuffins nearly swallowed True Detective whole. To his credit, Pizzolatto has adjusted. Look around you: Carcosa is everywhere. It’s the people that change.

This is why, when Ray Velcoro takes a shotgun blast to the chest in the final moments of the episode, I barely blinked. Sure, there was some initial shock, but once it wore off, I realized this could not be the end of this character. Putting aside for a second the “nothing is what it seems” philosophy that guides most noir, to say nothing of most television, it just didn’t make any sense. This show is a lot of things, but it’s not cheap.

Ray may believe that a good beating provokes personal growth, but there’s nothing to be gleaned by losing him this early on. We’ve only spent two episodes with this damaged shell of a man; his story is not done. Arguing with his ex over his visitation rights, they trade assessments of his character — he’s a piece of shit, he’s a bad person, he was good at being decent. We’ve still yet to see the real him, or to find out if there even is one anymore. This goes for Ani, Paul, and Frank, too. Forget Ben Caspar — who are these people? That’s the mystery.