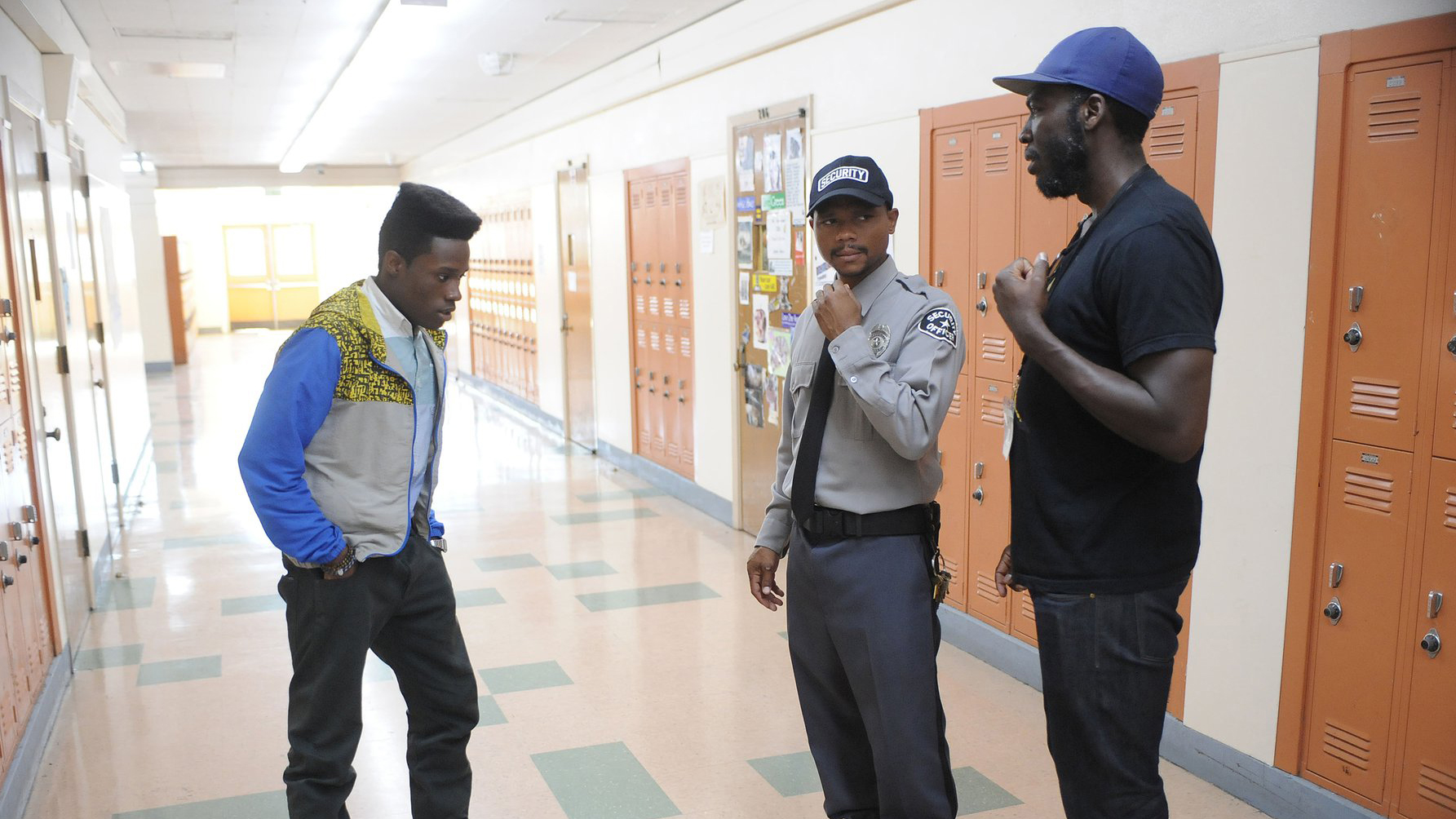 Amid the ’90s nostalgia in Dope — the coming-of-age tale set in Inglewood, California, that was released recently to enthusiastic reviews — one of the most unexpected throwbacks in the film is a cameo from the actor De’aundre Bonds, reprising his role of Stacey from the 1999 film The Wood.

A lot has changed for the character. When he’s introduced in The Wood, which, like Dope, was cowritten and directed by Rick Famuyiwa, Stacey appears to be a conventional villain: a gang member — red baseball cap, matching belt — who pulverizes junior high school kids and commits armed robbery. There are layers to him, however. Stacey is a vulnerable, wayward kid. He’s also a caring big brother who follows a code of respect. Bonds is fantastic in the part, finding each emotion and nailing every scene.

Stacey is now on the other side of the law as a high school security guard in Dope. Famuyiwa wrote him into the movie to connect both films. “I wanted to show that my new characters were living in the same world as The Wood,” he told me in an email.

Though Bonds is in only a few scenes, he was thrilled to revisit Stacey. “It was an honor to play that character again,” the 39-year-old actor said over the phone last week. “He started off not so well in The Wood as a gang member. Hopefully everybody grows over time and tries to do something better with themselves. It was cool that he wasn’t the same type of person.” It’s an arc that resonates with Bonds, who served nearly a decade in prison for a manslaughter conviction.

De’aundre Bonds was in the mood to celebrate when he arrived at his aunt’s house on September 5, 2001. A few weeks earlier he had booked a supporting role in Denzel Washington’s directorial debut, Antwone Fisher.1 That Washington personally cast him made the moment even more special. After the audition, Washington called Bonds into another room. Washington looked around, leaned over, and whispered that Bonds had gotten the part. Bonds jumped up and down in elation. “It was beautiful. It was a blessing,” Bonds says today. “Of course I never had the opportunity to do [the film].”

He was still riding high when he pulled into his aunt’s driveway, blasting Tupac on his stereo, Bonds says. He knocked over a trash can as he parked. His aunt’s boyfriend, Anthony Lamar Matthews, confronted him about it and a fight erupted. As the larger man, Matthews quickly gained the upper hand. Bonds then ran into the house and grabbed a steak knife from the kitchen. He issued a warning. Undeterred, Matthews rushed Bonds, who then stabbed him in the chest. Bonds told the Los Angeles Times in 2003 that in the aftermath he held Matthews and screamed, “Please don’t die! Keep on breathing, man!” He recalled Matthews dying in his arms.

Bonds was convicted of manslaughter and sentenced to 11 years in prison. He still maintains that he was just defending himself.

He’d had a rough life prior to the incident. Bonds, who was born and raised in South Los Angeles, says his absentee dad was an alcoholic and his mom was addicted to drugs. He grew up fast. He lived in a foster home and group homes. He was filled with anger and resentment. He had a temper; Bonds says he was kicked out of a school in sixth grade for fighting. But somehow he avoided the gangs that prowled his neighborhood hunting for new recruits. Bonds had his own hustle. He sold candy. He’d take the bus to Hollywood, buy $20 worth of product at the 99-cent store, and take root on Sunset to hawk his wares. Sometimes he’d earn more than $100 in an afternoon.

At 13, Bonds got a part in a school play, and it was a life-changing experience. He loved the praise and attention. He decided he would be an actor. The emotions he felt — the anger — now worked in his favor. He booked small parts in Tales From the Hood, Sunset Park, Get on the Bus, 3 Strikes, and The Wood. His most well-rounded performance was in 2000’s Lockdown, a forgotten independent movie in which Bonds plays a man wrongfully imprisoned for murder.

Shot at the New Mexico state prison where an infamous 1980 riot left at least 33 inmates dead, Lockdown left Bonds drained. He balked at filming a scene where his character was raped by his cellmate, a monstrous neo-Nazi. “I told the director I didn’t want to do it,” he recalls. “I did one take. Then I went in another room and I cried because I felt like I sold out or something. I wouldn’t do that scene again. If I could take that back, I wouldn’t do it.”

At the peak of his career, Bonds was living recklessly. He drank heavily and partied. He was dangerous; after one incident, he pleaded guilty to battery of a spouse and received probation.

He even arrived on the Lockdown set on crutches after being shot four times just days earlier. The limp was written into his character. “I thought I was Tupac, man. I felt like I was thug life,” he says. “I thought I was basically on top of the world. I wasn’t. I wasn’t shit.”

Bonds served his time at Ironwood State Prison in Blythe, California. He would get recognized, he says, and his fellow inmates would frequently challenge him. “I rose to the occasion when I needed to as a man,” he tells me. “If somebody come at you and try to test your manhood and you don’t do nothing, you’re going to have problems. Prison ain’t no joke. It’s real tough, real serious. I’ve seen a lot of people die in there. I seen a lot of people hurt.” He had his jaw broken at one point. The whole ordeal took an even greater toll mentally.

There comes a time when every inmate must transition from the mentality of a free person to that of a prisoner. It’s a realization that you’re surrounded by nothing but walls and danger. Survival becomes the goal of each day, and you have to know when to be on the offensive and when to play defense. Over the years, the trauma and stress build, leaving permanent scars. “I’m still dealing with the time that I did,” Bonds says. “I’m not the same. I don’t think I’m the same person.”

Yet Bonds considers himself fortunate. He’s familiar with the case of Kalief Browder, the young Bronx man who spent three brutal years on Rikers Island without a trial. Browder killed himself earlier this month. He was 22. Sometimes Bonds thinks of his Lockdown costar Lloyd Avery II, the Boyz n the Hood actor who was killed in Pelican Bay while serving a life sentence for killing two people. “That could’ve been me, man,” Bonds says today.

I first communicated with Bonds back in the summer of 2007, when I was reporting a story for King Magazine about Avery. In a letter to me from August of that year, Bonds struck a resigned tone, but there were glimpses of hope. “Prison hasn’t taught me anything. It’s only tried to make me worse,” he wrote. “However, utilizing this time to reflect on what I was, who I am now, and who I will be, along with total dissatisfaction of who I was and life’s expression in general, has motivated and enabled me to ‘want change’ and rehabilitate myself.” He signed off, “Peace eternally, De’aundre.”

Bonds was released on March 29, 2011. It took time to readjust to society. For the first year, he couldn’t be around other people. He maintained “that edge,” he says. Prison life was slow. Things moved too fast on the outside. New technology was also overwhelming. “It was like I stepped into the future,” Bonds says. “I don’t know how to work an iPhone. It’s crazy. I’m still learning a lot when it comes to this computers and all this technology and these iPhones and social media. I don’t even have a Twitter. I have an account, but I never be on there. I just don’t want to tweet my thoughts out there.”

Bonds believes he’s found peace through the support of his family and the birth of his first child, a son. He’s also restarted his career, with work in Rizzoli & Isles, Gangster Squad, Imperial Dreams, and now Dope. Like Stacey in Dope, he’d like to demonstrate growth in future roles. Gangsters and tough guys aren’t as appealing these days. Next he wants to portray a doctor or a billionaire — perhaps opposite the two-time Academy Award–winning actor who once hired him.

“Who knows? Maybe one day I’ll be able to work with Denzel,” he says. Bonds quickly corrects himself. “I think I will. I won’t say ‘maybe.’ I will.”

This piece has been updated with additional information since it was originally posted.