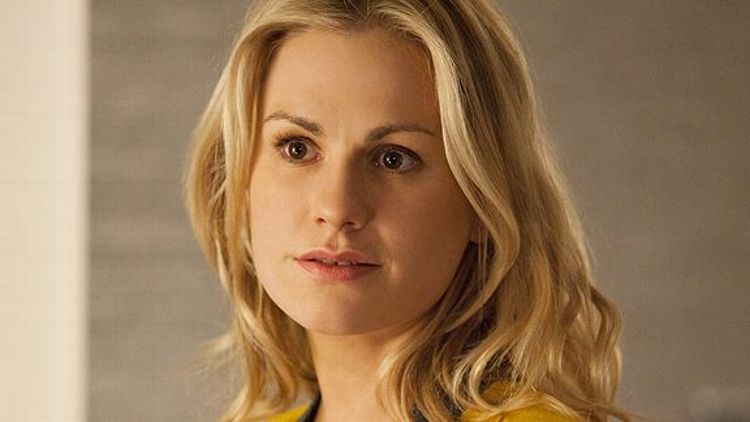 Damn it whatever I love this show. It’s entertaining and mostly unpretentious. Even when it is pretentious it’s ridiculous. It asks nothing from me but the complete suspension of disbelief, and in return it gives me stupidly attractive naked people doing inane dialogue about the complexities of vampire politics. Bon Temps seems to be located in or around Jackie Treehorn’s estate.

Eric Northman (the secondary vampire love interest in Sookie’s supernatural love-interest spangled life) has been chilling in her living room, probably watching Toddlers and Tiaras on TV. He’s come to deliver another speech about how he needs to own and control Sookie. Can’t blame the dude for being upfront with his needs, but you also can’t blame her for telling him to get the hell out. Eric is always attempting to seduce Sookie with hot pick-up lines like, “Your blood tastes like freedom.” Why do I always feel like they’re not actually talking about her blood?

At S&M disco Fangtasia, baby vamp Jessica and her normie boyfriend Hoyt are confronted by an anti-human-vampire sexual relations (“fangbanging” in the parlance of the show) protest. Jessica doesn’t take kindly to being called a vampwhore, but gets especially angry defensive because Hoyt doesn’t know she’s been cheating on him. Like, a lot. Like with anybody. (Whoops.)

Meanwhile somewhere out in the super set-dressed forests of Bon Temps (so many well-lit clearings) Sookie’s boss Sam Merlotte is having a conversation with an actress who acts as casually and well as she possibly can considering she is arching her back topless the whole time and playing a shapeshifter horse. Sam’s hair gets a little more gloriously feathered every season.

Since their break-up at the end of last year Sookie’s primary vampire love interest Bill Compton has been reading The Game (Special Edition For King Vampires) and turned into a totally different more dynamic character that gets laid a lot more and also seems like kind of an a-hole. Naturally this is catnip to Sookie, who goes to visit him at his Beverly Hills-looking plantation home and does a sweet “nice to meet you bitch” face when he introduces her to his security chief Katerina while simultaneously buttoning his pants back up. All in all I think they’re handling the split pretty well.

We find out that national vampire spokesperson Nan Flanagan convinced Bill to be a snitch for vampire authorities (this wouldn’t fly on The VampWire). Thus begins the greatest flashback in True Blood history, where Bill Compton goes to a punk club. Bill the punk looks like Phil Hartman as Unfrozen Caveman Lawyer with more eyeliner. It recalls the other greatest punk club scenes on television: when Daniel Desario gets into punk for a cool girl on Freaks and Geeks and the punk rock episode of Quincy.

Sookie’s brother Jason Stackhouse is the character on True Blood with the lowest IQ and is therefore the funniest, but for some reason tying him to a bed for isn’t as fun or interesting as it sounds. He has been trapped in a drug lab (set up to manufacture synthetic vampire blood) and his friend Sergeant Frank Sobotka (Chris Bauer) appears to raid it. Jason’s girlfriend Crystal shows up jacked up on way too much V like Sharon Stone in Casino, turns into a panther and rapes him.

Sookie reunites with best friend Tara, who goes by Tony now (Toni? Toné?) and immediately steers the conversation towards being about which one of her vampire boyfriends she should like the most. Seriously it takes her like five minutes to ask Tara anything about herself, and Tara has been in New Orleans, taken up cagefighting, and developed a taste for…blood.

Because they are ancient vampires Eric and Bill do not understand how to use contractions. It is likely they will live a billion more years and never figure out how to make sentences sound shorter and less formal. Their conversation contrasts with Sookie and Pam’s, who are both pretty hilariously passive-aggressive (bless their hearts).Then there is some intense witchcraft at the occult book club doubling as a coven Lafayette keeps getting dragged into by his boyfriend. He turns out to be very powerful but then he has nightmares and guilt. But hey, witches get shit done.

Jessica shows up alone at Fangtasia for one drink and ends up draining some random guy in a bathroom stall. Sookie catches her and side-eyes the hell out of the smeared blood on one side of Jessica’s mouth (nice touch). Eric Northman’s shirts are so low-cut I can never take him very seriously when he’s talking, because nobody listens to what is coming out of a person who looks that good’s mouth. Sookie finds him wandering on the side of the road at the very end of the episode, doing his best vacant male model face with his brain now seemingly wiped.

True Blood plays off the popular and incredibly common romance novel fantasy of being a normal(ish) woman with sexual superpowers, able to seduce strangers and break womanizers of copious years of bad behavior through sheer will (the proper term for this is “mosquito hawk”). Of every hot guy you meet being mysteriously attracted to you and then falling in love with you because of your…blood. It may not be even a little realistic, but boy does it sell.

Which Actors Tarnished Their Oscars the Most in 2011?

The Kindest Cut: Natalie Morales is Out of the Chelsea Handler Show