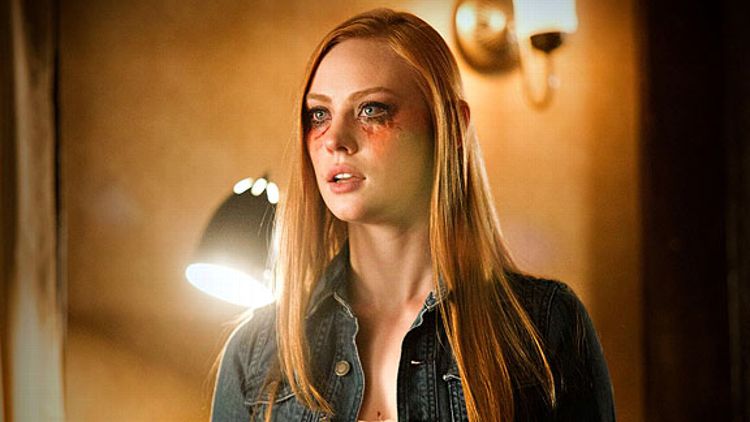 Alcide carries Sookie’s wounded body across the wild and windy moors of Bon Temps, but then Bill hip-checks Alcide and gives Sookie his wrist blood to drink. Alcide sets up a “werewolves and vampires praying together” joke but Bill, bad stand-up, cannot produce a decent punchline. Marnie/Antonia brings Eric into the coven den, where he is greeted apprehensively by the witches until she reveals her party trick of having tamed him. Tara suggests that Marnie is more interested in war than peace, and Marnie steps up her ranting to Michele Bachmann-esque levels.

Bill stares lovingly at Sookie, and then Alcide pops up from behind him to also stare lovingly at Sookie, then stalks out. Sookie thanks Bill and Bill is like “this is so us” except he doesn’t say that. Sam and Luna debate the safety of going camping as a way to get away from Marcus, her pimp-slapping werewolf abusive ex. Debbie pretends to be out cold when Alcide gets home, but jealous girlfriends never really sleep. Jessica seeks comfort from Nan Flanagan, who is disgusted by Jessica’s hysterical weakness and prodded into a not very subtle comment about balancing vampire work and vampire family.

The vampires are silvered back into their sleeping cars. Bill admits that he didn’t actually kill Eric Northman even though he promised he was going to. Politicians, damn. Hoyt finds Jessica’s Taylor Swift CD and is so angered he packs up her shit in a box. Jessica’s belongings include: Twilight in paperback, Tina Fey’s Bossypants, the Urban Decay black eyeshadow palette, magazines called CelebScene (InStyle), LETT (ELLE), hair products, and some bras. He addresses to box “FOR YOU, MONSTER” and grabs a beer from the fridge. HOYT!

Lafayette, possessed by the Creole nanny and having abducted Arlene and Terry’s devil baby, comes into Hoyt’s place and pulls a gun on him. Terry and Arlene file a police report with Jason Stackhouse and Frank Sobotka, who are baffled ’til Hoyt calls in with a hot tip. Sobotka does a shot of V in the back room. (Blood Lieutenant: Portal Of Evil Bon Temps). In a dream Sookie wakes up from an especially satisfying couch nap and saunters to the door in a sheer red teddy and stiletto heels (regular — for a TB dream sequence at least). Eric shows up at the door in the daytime and he and Sookie start screwing around when Bill shows up. Sookie splays out on the dining room table while Bill and Eric lock horns and spit fangs.

Marcus the pimpwolf shows up at Merlote’s looking for Sam. Tommy dogblocks for his brother. The cops show up at Hoyt’s and bang down the door. Andy has taken too much V and is in a testosterone storm. Everyone points guns in a standoff. Arlene and Terry drive their truck up on the lawn. Sam, Luna, and Luna’s daughter are sitting by a picturesque lake with two gigantic tents. Luna has an airbrushed horse on her shirt. Subtle. Sookie is still in her fantasy, where Eric and Bill sit on the couch and the lens has been smeared with vaseline (we hope it’s vaseline). Sookie suggests that they open the relationship into a threesome, that she loves them both and wants to go full Y Tu Vampire Tambien.

Debbie buys some back alley V and takes the whole shot. Arlene called Jesus, who goes inside to exorcise Lafayette (Go Brujos!). Lafayette pulls a gun on him. Nelsan Ellis is such a good actor he is able to do this scene of being a woman discovering he has male genitalia and then crying about it in a Creole accent better than anyone could reasonably be expected to. Debbie brings Sookie some flowers, but she should really tell her to take her earrings off because it’s about to get scrappy. Sookie decides to read Debbie’s mind to see if her intentions are malicious, which they aren’t. They bury the hatchet. Jesus reads Lafayette/Mavis’s mind. Again, Nelsan Ellis is really acting the shit out of this material, which is unbelievably campy and over the top even for this show.

Having been talked down, Lafayette gives Arlene back her baby. Alcide shows up at Marcus’s motorcycle garage. Did you know Joe Manganiello is going to play a character named “Big Dick Richie” in Steven Soderbergh’s upcoming male stripper movie Magic Mike? Now you do. Marcus and Alcide toast to Shreveport and monogamy, and then Marcus asks Alcide to back him up on confronting Sam.

Frank Sobotka apologizes to Jason for doing V at the negotiation. They dig up the yard and find Mavis’s corpse baby, and Mavis starts singing a fais do do lullaby, because the writers of True Blood learned about the south from New Orleans Square in Disneyland. Then Lafayette vomits up the golden spirit of Mavis. Lafayette says “you got it bitch” to the ghost slave nanny, because good lord what?

Meanwhile at the Moon Goddess Emporium in gentrified downtown Bon Temps, Marnie lets in Debbie, who wants to represent for her werewolves all across the world (keep hitting them witches in the low lows girl). Sookie overhears them as she tries to rescue Eric. Tara pulls a gun on Sookie and Sookie reads Tara’s mind, who tells her how to escape.

Debbie pulls up in the truck to get Sookie, because double twist Debbie and Sookie and Tara are all in on it together Wild Things style. Eric is still waiting in the anteroom. Some of the witch supporters try to escape but the doorknobs are red hot. At the vampire/human tolerance rally, sponsored by 1-800-Dentist, Bill and Nan Flanagan are having a weird offensive conversation about the civil rights movement.

Jason helps Hoyt drill his door back together as advance apology for how he is going to drill Hoyt’s ex-girlfriend. Tommy-pretending-to-be-Sam faces off against Alcide and Marcus at the Weresons Of Anarchy HQ, while Sam has loud tent sex with Luna while her daughter sleeps alone in the next tent. (Ew.) Jason brings Jessica her stuff, but refuses her offer to come in. But twist! They do it in his truck to Taylor Swift. Debbie drops Sookie off at the rally, where Bill is bloviating from a podium. Sookie interrupts him but the witches storm the hall with Marnie at the fore and brain-possess the vamps and make them go HAM on the peace-loving vamp-sympathizers. This show!

Previously:
The Eternal ‘Stardom’ of Julia Roberts
Hugging It Out: A bicoastal debate on the end of Entourage
Justin Timberlake, Madonna, and the Pop Star as Comedian