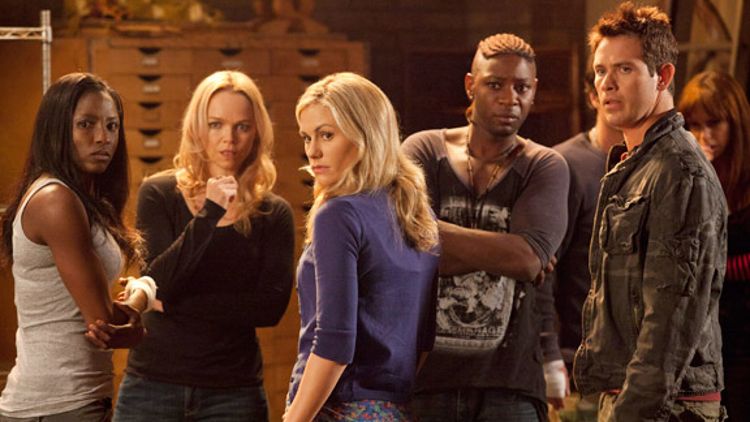 The black-leather vampire gang mounts up on the Wiccan co-op with bazookas. Sookie makes a plea to Marnie’s reason for peace, but to no avail. Marnie psychically tosses a knife into an Avril Lavigne look-alike’s gut to demonstrate that she is really, really, really serious. What do you think Marnie’s favorite record is? I’m guessing Carole King’s Tapestry. Lafayette notices that Marnie vomited up Antonia’s spirit. Antonia wears a dirty white gown that symbolizes that she is from another time.

Jesus and Lafayette do the play-by-play commentary on Marnie/Antonia’s mental breakdown over her divided selves. Jessica aims her huge gun at the Moon Goddess Emporium. I wonder if Eric designed these chic vampire outfits? What is that, all-black Tyvek? Jason Stackhouse stops them from blowing up the spot, knowing Sookie is within. I see Jason still shops at the Bon Temps American Apparel. Pam calls Sookie “a gash in a sundress.” Pam gets all the best lines and looks on this damn show.

Sam waves a gun around, and when the werewolf gang’s heavy teases him, gets a punch in. Nobody jokes about how he is wearing double denim. Luna shows up in her burgundy leather moto jacket and is surprised to see Sam there. Alcide, ever the moral middleman, decides to join the vigilantes looking for Marcus. True Blood clearly got all its ideas about gangs from West Side Story and Grease.

Debbie and Marcus are discussing future plans. Debbie has suddenly flipped to Marcus for no reason except that it is convenient for freeing up Alcide. It’s too bad, because the Debbie/Alcide/Sookie love triangle was totally interesting and I’d like to see Debbie stick around (thought I doubt it’s happening). Marcus tells Debbie that they “make sense together,” which is the same exact hackneyed thing Elton says to Cher in the parking lot at Circus Liquor after the Val party right before he tries to get all handsy. As if!

Jesus finds Avril Lavigne’s pulse and claims that she’s still alive. They carry her corpse into the spare room and pull the knife out. Jesus tells Lafayette he was bluffing about the whole “being alive” thing, but that they’re going to do some brujo sorcery. Marnie gives Jesus permission to raid her kitchen because she’s a chill hippie mom who gardens at night.

Sheriff Sobotka is walking through the foggy forest clearing where sinister things always happen on True Blood. He sees a flashing light in the distance that then grows out of the ground. A woman in a gown materializes out of the dirt, as is wont to happen on this show.

Bill and Eric curb-stomp a Marnie-programmed vampire they call “a robot.” Bill calls Marnie/Antonia out to the street. Bill sure is one for loud platitudes this season ever since he got into politics. Sookie follows her out and everyone watches as the partially curb-stomped vampire gets buzzed on the Wiccan bookstore’s electric sun-fence. Marnie promises to exchange Sookie’s freedom for Bill and Eric’s self-immolation. Jessica rolls her eyes, like “this bitch.”

Bill says he’ll do it for Sookie’s honor, because Bill has always been one for losing causes (see: the Civil War). Sookie starts to cry at the thought of Bill and Eric shooting each other, and then becomes maybe a little turned on because this is as close to her recent MMF fantasy as she’s ever going to get.

Pam shoots the force field, which doubles back and explodes without killing anyone inside. Alcide and Sam raid Debbie’s house and find Luna’s daughter. Alcide busts in on Marcus and Debbie having a really deep conversation. Sam starts waving his gun around because he seems to not really understand how to use a gun. Marnie puts her tough-lady rebel jacket back on and strikes a pose.

Eric yells at Pam for threatening Sookie. Jessica calls out Bill on his saying he’d attempt suicide, because she is his surrogate daughter and WTF Bill. Then she sees a bloodied damaged blinded Jason on the sidewalk, and she feeds him her blood. Andy wakes up with the fairy on his face. Her name is Marella and for whatever reason she wants Sheriff Sobotka’s protection in the human world. She tells him, “Make love to me,” because she wants us to barf up our witch alter egos, presumably.

Sam and Marcus have a good old-fashioned werewolf throwdown with fight choreography that seems very cribbed from Road House. People on this show sure are prone to impugning the dignity of others when they’re being threatened physically! Sam maims Marcus, but then Alcide chokes him to death. Debbie tries to smooth things over, but Alcide is already werewolf-divorcing her aloud one second later. Then he stalks out, presumably to drink piña coladas at Trader Vic’s with his perfect hair and bad self.

Marnie uses a pool of blood as a surveillance scrying mirror and foresees her own death. She calls for a circle and is reluctantly obliged. Jesus cuts symbols in his arm, then Lafayette ties his hands up with a scarf. The vampires are pulled into the street by invisible fishing lines to the sun shield. Everyone does a good job of acting out “being pulled in” because they’ve done tons of movement class.

Jesus somehow breaks into the force field with his mind. Jessica and Bill want to kick Marnie’s ass. Pam is really upset that Eric’s loyalty has shifted away from her over to Sookie. Marnie conjures a ring of fire. Jesus turns into a demon as Sookie is trapped between bad CGI flames. Jesus chants something through an internal voice changer that makes Antonia leave Marnie’s body and Jesus turn into a dude that you would see at Burning Man. Tara and Sookie hug, because, oh, hey, remember Tara?

The shield drops and Bill and Eric rush in to compete to save Sookie. Eric rips the heart out of the drug-rug hippie, then slurps some blood through his aorta like a fun straw. Fun Eric is back, y’all! Bill tommy-guns Marnie to death. You can do that??? Luna and her daughter see Sam come out of the house and Luna immediately realizes that Marcus, her baby daddy, is now dead.

Everybody hugs it out. Sookie seems kinds of really sad about having to choose between Eric and Bill, which, you know, world’s smallest violin. Jessica and her ginger pouf are nursing Jason back to full health. If Hoyt ever sees Jessica being mothering to Jason he’s gonna be so hella pissed. Jason basically says he’s going to give up his friendship with Hoyt in order to be with Jessica and she smiles, because her ego likes that. Their guilt about Hoyt is just going to make the sex that much better.

Jesus and Lafayette pillow-talk in their leopard-print boudoir, and give the traditional horror-movie “nothing bad can happen now” speech as they drift to sleep. Lafayette looks up and sees Marnie flashing over him from the ceiling, then flying into his open mouth and possessing him. Whoops.