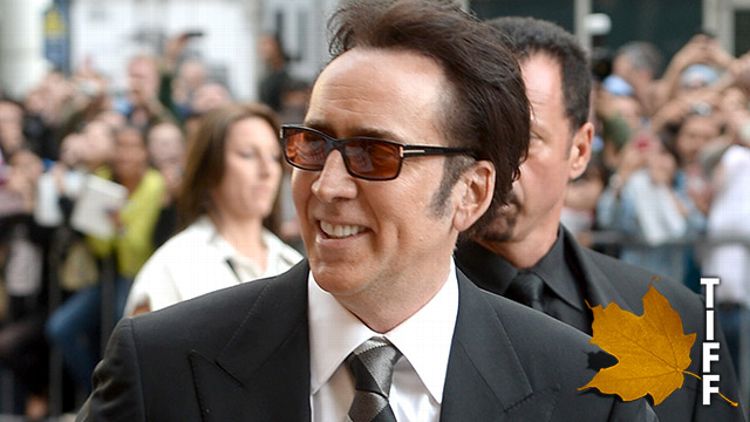 My last handful of movies has brought me to a terrible conclusion about a very specific aspect of life. Nicolas Cage has a head and face and hair that no longer belong anywhere before the year 2150. Above the neck, he’s all science fiction now. It’s not his crazy face, not the way his acting can be. His skin is tight, the area around his amazing eyes seems sandblasted, his curtain of teeth makes sense only as a piece of a very expensive bathroom sink.

You couldn’t put Cage in Henry James. You couldn’t put him in a Western. You can’t even make him a cop or the owner of a deli. He looks like the captain of a hedge fund on some Wall Street space colony now. He glows, and the glow gives him an alien edge. He looks too much like he’s from Beverly Hills to play, I don’t know, a backwoods alcoholic Texan ex-con who oversees the poisoning of trees for sinful land developers. And yet there he is in David Gordon Green’s Joe. Cage isn’t the primary problem with this movie, but having him in the title role — with a beard that makes him look only nominally grizzled — provides depressing proof that no one on the project seemed to know what they were doing.

Joe is one of those depictions of poverty in which life is lived as a mockery of self-respect, dignity, and basic human nature. Joe supervises a crew of men whose job requires them to spray trees with a toxic concoction. Joe’s workers are black and seem as though Green hired them from down the road. They have camaraderie, thick Southern accents, and faces that make sense in the woods. But the movie doesn’t care about them. Instead, it watches as Joe smokes and drinks and frequents a whorehouse. It follows a 15-year-old named Gary (Tye Sheridan) who asks Joe for work only to have his decrepit drunkard dad beat him, take the money he’s earned, and leave his family to go hungry in their junkyard of a house.

The movie grafts onto its misery an arbitrary tale of crime. Several times, Joe encounters a scuzzball still mad that Joe roughed him up at a bar. He retaliates by shooting Joe in the chest. A different altercation between Joe and the scuzzball makes Joe want to have sex, so he drops by the whorehouse. But the guard dog has it in for Joe, who’s had it with the guard dog. So he get back in his truck, drives home, picks up his pit bull, drives back, and lets the pit bull loose on the guard dog. While they go at it, Joe and the whore head upstairs (I didn’t catch her name), and a version of the following conversation takes place.

At this point, you might be thinking that Joe sounds all right. It’s got scuzz and violence and sense of place. It does have all of that. But it also has Joe walking into some drunk lady’s house and showing her boyfriend how to properly skin the deer she found caught in a fence. It’s got Joe standing in his house and removing the scuzzball’s bullet by himself. It’s got Gary driving Joe’s truck holding a can of beer in a beer cozy. It’s got the two of them getting drunk in a field littered with unwanted speedboats and a slow-motion shot of Gary’s dad dancing drunk in the road, having just beaten a man to death for his bottle of wine. It’s got all the clichés of backwoods life with none of the human interest in the people living it.

Green has given us a greatish work of Southern ecstasy in 2000’s George Washington and a bogus one with 2004’s Undertow. Not much after, Hollywood called, and he answered. Joe is both of those older movies combined and with some of Harmony Korine’s Gummo and Werner Herzog’s The Bad Lieutenant: Port of Call New Orleans, Cage’s last positive astonishment as an actor, thrown in. Even when things are dangerous, the stakes in Gary Hawkins’s script are low. This is a movie that needs either a realist or a poet — or at least someone with his feet on the ground, not sunken into it.

Joe has been taken from a Larry Brown novel, and the fact that it continues to get worse as it goes along means that it doesn’t know how awful it was to begin with. I suspect Green would argue that all the grit and ugliness speak to some sort of authenticity, that there is truth here. The movie, however, wallows in preposterous domestic and emotional grime, in sickness, fatalism, and self-defeat. I didn’t care whether I was being given the truth because I also felt like I was being given cancer.

Fading Gigolo also has a whore, but it’s John Turturro, who makes a persuasive case for himself as someone you’d call for sex. Turturro wrote and directed this sex comedy, which is funny and actually romantic, but in a way that’s particular to the way the film’s made. Like Coffee and Cigarettes and Passione, this new movie is sloppy but sends you out of the theater on a high. Woody Allen plays Turturro’s pimp, and such is his draw (even among people occupationally overexposed to him) that in the first of two failed attempts to see this movie I was turned away from the already-overflowing line.

It’s Allen’s idea to send Turturro’s character, a broke West Village flower arranger, to the home of wealthy, stunning women like Sharon Stone, Sofia Vergara, and Vanessa Paradis. And what goes on between Turturro and each woman is sexy, as is the connection between Stone and Vergara, who need a movie together. (Actually, it’s just so good to see that Stone still has everything that made her famous. I just wish more directors were less terrified to use it.) With any other director, this might be the most vain of vanities, but Turturro is the only sensualist American movies have. He’s a lover. He loves women. He loves the idea of loving them, too. I don’t know whether gigolos are a fantasy for middle-aged women, but if Turturro came a-knocking, you’d surprise yourself by letting him in.

The waning days of any festival guarantee a decent opportunity to catch up with whatever you missed when things were busy. Again, the scheduling here always induces stress and remorse. For instance, watching a three-hour-and-10-minute film means that you could miss as many as three other movies. That’s a practical matter more than it is an argument for gluttony. In any case, I found Ned Benson’s The Disappearance of Eleanor Rigby, that three-plus-hour movie I missed the other day, and I’m glad I did. This is the sort of movie that sometimes comes out of France — a big, modern-day, ensemble drama that has some filmmaking and ideas. American directors are rarely afforded that kind of epic length unless it encompasses stagecoaches, petticoats, or tanks.

The skeleton of the story here is simple: Tragedy ends a New York City marriage. The conceit is that it’s told from the perspective of both halves of the couple. Part one is “Her” (Jessica Chastain). Part two is “Him” (James McAvoy). And all the film does is watch these people exit and reenter — lives and scenes and rooms. The “Her” half is stronger in part because she — that would be “Eleanor Rigby,” and the film is prepared for your eye rolls — moves up to Westport, Connecticut, and into the home of her parents (William Hurt and Isabelle Huppert) and slightly younger sister (Jess Weixler). She takes an identity theory class taught by Viola Davis (almost everyone on this side of the film is a practicing intellectual). Most of the easy wisdom is with “Her,” which contains searing asides and moving anecdotes and drama. It also has the better actors. “Him” is limited by being too true to younger, unmoored characters who lack Davis, Huppert, or Hurt’s candor and simple profundity.

That section has Bill Hader as McAvoy’s best friend and the chef at his empty restaurant, and Nina Arianda as his bartender. They’re both wonderful, as is Ciarán Hinds, as McAvoy’s father. But no one here is as articulate or quick as they are throughout the first half. So you’re happy when, say, Huppert shares a scene with McAvoy, whose talent is underrated. He just lacks the mysterious intensity of Chastain. She has a camera-readiness that he rarely has. Still, they make sense together. The movie examines the ways that a tragedy can affect two people drastically enough to weaken their bond — even if that weakness torments one person and never occurs to the other. The first part of the film is necessary to explain the other. The scenes they have in common don’t repeat so much as revise.

I don’t know who Ned Benson is. Eleanor Rigby is his first film, and he can write and direct. Watching it, I thought a lot about Kenneth Lonergan’s Margaret. This doesn’t reach that movie’s heights. But I think Benson can pull off his own version of that kind of novelistic mastery. The Weinstein Company picked it up a few days ago, and I’m praying that Harvey Weinstein and his staff do right by it and release it intact. It’s not a perfect movie — it turns out to be repetitive and callow toward the end. But whatever its flaws, tinkering won’t solve them. Anyway, there’s so much life, good acting, intelligence, and human cultural perception that you’re happy to be near these people. They ache and regret and think and lust. They’re who American movies often forsake: us.

No New Friends: The Return of Arsenio Hall