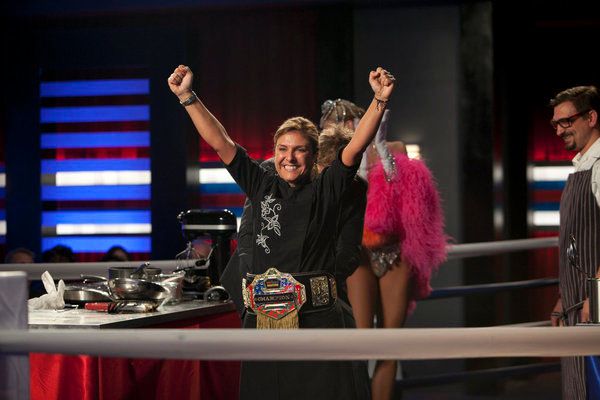 Last week’s episode of Top Chef Masters marked the departure of Art Smith and a farewell to his many variations on biscuits and dressing. It also was the point at which the enamel started to crack on the Le Creuset casserole of inter-chef relationships: Kerry and Patricia sparred during service and Art and Lorena’s credentials were called into question when the chefs were split up for their ceremonial van rides to the grocery store. With only five chefs left in the competition (Chris, Lorena, Takashi, Kerry, and Patricia), we have reached the ego trip stage. Everyone is tired and cranky and, according to Patricia, aware of who’s on top and who’s — well, Lorena.

For the Quickfire, the chefs must grate a hunk of Parmesan, portion a tenderloin into five seven-and-a-half- to eight-and-a-half-ounce filets without a scale, and separate 18 eggs. The first two to finish go head-to-head preparing a dish out of this Atkins-friendly triumvirate. It can be sort of a yawn to watch chefs do the grate-and-eggshell dance against a clock: It kind of reminds me of the MasterChef mass-murder eliminations during which contestants are sent home in shame for failing to peel apples correctly or taking too long to break down chickens. This particular task, or at least the first heat when no food is actually being served, is more an exercise in precision than taste, so I fear for poor Lorena and her wild ‘n’ crazy tasty throw-togethers. I like telitas! Screw the mise en place! Surprisingly, Cosentino, who reserves a special place in his heart for butchering former farm animals, gets disqualified when his filets are de trop petites after flying through the challenge and can’t continue because he’s already hacked away at all of his loin. Patricia comments on how useless speed is without precision, then makes the same mistake with her meat. Takashi and Kerry are the first to pass the test, leaving Lorena in the dust. At this point I would like to mention that Takashi has undergone the metamorphosis from “Takashi” to “Takashi-san” or “the immunity king” or even “the ninja,” having won three Quickfires and managing not to rub anyone’s face in the fact that he’s the cat’s pajamas. Kerry, understandably, is quaking on his gel mat. Takashi serves up a sautéed beef tenderloin with potatoes (potatoes! In 15 minutes! Without a microwave, which, by the way, is a dandy trick that I highly recommend), an egg on the sunny side, and some veggies, while Kerry crusts his filet in the Parmesan and egg and serves it with arugula because he’s a simple guy and that’s A-OK. The other chefs are judging these two dishes blind, which is always a nice twist, and are generally complimentary of the two offerings. Takashi’s egg isn’t runny enough, so Kerry wins his first immunity. This, incidentally, is the best immunity to have snagged, because not only does Kerry get the usual $5,000 for his charity, he doesn’t have to cook in the elimination challenge. He gets to sit ringside with the judges and Sugar Ray Leonard and look like a bad-ass. I’m still not putting any money on Kerry to win this thing, but way to pull out the stops when you have to, soldier.

This week’s elimination is boxing themed, because “Las Vegas is the center of the boxing world,” and they’re saving the brothel theme for next week. The chefs are matched up by drawing knives and will compete in four rounds. What’s also interesting is the absence of a judge’s table this week, as the votes are cast via note cards and feedback is given to the chefs as they stand in the ring looking out of place with their tiny gloveless hands just dangling there. The ingredients for each match are revealed just before each battle begins. The twists! The turns! But first, again, for some reason we must watch them all eat lunch, this time at Estiatorio Milos. The salt-encrusted fish was delicious, thanks for asking.

Back to business. Cosentino and Takashi battle first, with bacon as their muse and diminutive pantries to assist them on the road from pork slab to entrée. The judges this time around are Oseland (of course), Krista Simmons from the L.A. Times, Jane Goldman of CHOW and the man of the hour Sugar Ray Leonard, who is really gracious and seems way too nice to be the kind of person who hit people for a living for a number of years. It made me wonder what Mike Tyson would have to say about a too-pungent gastrique or underdone liver. Remember what he did to the guy who tried to dispose of his dead pigeon Julius? I want to see what happens when he’s served an undressed salad. Oh, well. This boxing match is all kinds of friendly, with Cosentino sending a piece of his bacon over to Takashi’s side when Takashi finds himself one serving short and Takashi offering up an egg as Chris flubs one of his own. This is a challenge of merit, not technicalities, plus everybody’s watching and no one wants to look like an asshole. Chris makes a Mexican-inspired breakfast with jalapeños, corn, and avocado, and Takashi whips up some bacon steaks with yuzu, apricots, and mushrooms (I know, but he’s the ninja, so he somehow makes this combination seem not disgusting). Chris is the victor. He’s the “pro-pork televangelist,” after all.

The next matchup is Patricia versus Lorena, and lordy do they seem to hate each other at this point. Bacon is again the mystery ingredient (in the interest of fairness, but not in the interest of enjoyable-to-watchingness). Lorena has a lot to prove, and while Patricia finishes her “semi-warm-salad” riff on a BLT (bacon, leek, and tomato) early, Lo-teli-ta slaves over her potato-and-bacon chowder until the gong of the bell. Has this ever not been the mark of a winner? Everyone gets suspicious of the person who finishes early, as well they should: These challenges are designed to go down to the wire, and oversimplifying is usually a downfall. Lorena wins, shocking everyone, perhaps because Patricia’s leeks packed too much tang.

Now it’s Lorena pitted against Chris for the crown, and either Takashi or Patricia is going home. This is a terrible situation, frankly, because what Patricia lacks in patience and kind words during interstitials she makes up for in being a formidable chef. And I love Takashi. A terrible gloom appears over my television, a cloud that whispers “Takashi is leaving you, Tess, and he was your pick to win this whole shebang.” Lorena and Cosentino go at it first, and the cloche is lifted to reveal sugar as this round’s mystery ingredient. Desserts aren’t Cosentino’s forte, so he goes simple with a sabayon over fruit. Lorena is slightly more ambitious, throwing a flourless chocolate cake into the oven and then focusing on a caramelized-pineapple-and-walnut dish in case it doesn’t set. Luckily for her, it does, and her parade of three desserts stomps all over Chris’s custard puddle. Lorena wins some respect back from her haters, and points to the heavens repeatedly and cries while wearing a giant metallic belt. Because what’s more respectable than crying while accessorizing?

Patricia and Takashi are handed some fine ol’ slippery chicken livers for their matchup. If you weren’t already salivating, Patricia wants you to know that she “has no problem with guts.” Takashi’s chicken liver with prosciutto and pickled cabbage fails to stand up against Patricia’s liver-and-warm-asparagus salad even though, according to Oseland, her liver was a little under and nobody had anything bad to say about Takashi’s dish. Why? Why is life unfair like this? I just want something — was it the cabbage? Did the cabbage offend you? — to hold on to here. Instead, apologetically and mysteriously, the ninja is told to pack his katanas and scram.

Next time, at what looks like a Petey Pablo concert but is apparently a picnic, diners helicopter their napkins over their heads like idiots and Robin Leech is in attendance looking very unlike my memory of him. Also to look forward to: a clown, or perhaps a mime, dressed all in white and adorned with pom-poms pretends to drink wine and then trips over the curb.

How Excited Is Samuel L. Jackson for Taken 2?