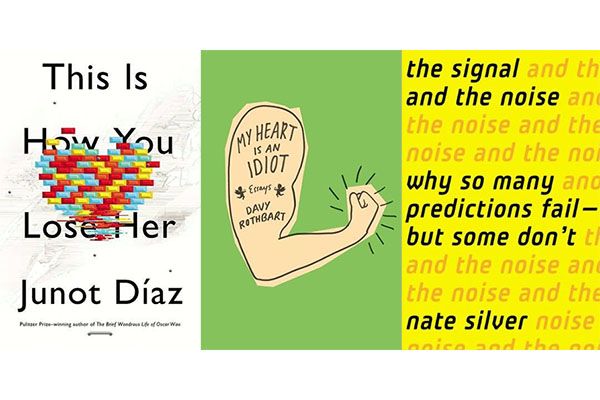 This Is How You Lose Her, by Junot Díaz

In college, I had a creative writing professor who claimed Junot Díaz had read 100 short-story collections before he penned a single word of his first book of stories, Drown. That professor (or maybe it was a friend of hers) later met Díaz and asked him if that was true. It turned out to be false. He had actually read 400 books of short stories.

Junot Díaz became a literary icon when he authored the universally revered The Brief Wondrous Life of Oscar Wao. This might be a crude parallel, but much in the way Louis C.K. is a comic’s comic, Díaz is a fiction writer’s writer. He’s gifted, well read, and eschews pressures to be commercially successful. A great way to not sell so many books: follow up a Pulitzer Prize–winning novel with a collection of linked short stories about, of all things, a boy falling in love. (From an interview with the Wall Street Journal, Díaz says, “I know for a fact that — it’s just the way our biases work now in the industry of literature, but certainly a short story collection does not receive the same kind of attention as a novel.”)

In This Is How You Lose Her, the boy is Yunior (who appears in Drown and Oscar Wao), a Dominican American stud who suffers every sort of love because he can’t escape the macho culture he identifies with. There’s young love, familial love, forbidden love. And, of course, there’s heartbreak, embodied in the book’s final and best story, “The Cheater’s Guide to Love,” a devastating narrative of Yunior paying the ultimate price for his unfaithfulness. (It appeared in a July issue of The New Yorker.) All of the elements that made Oscar Wao a favorite among the literati and casual readers are here: playful dialogue, vibrant prose, an extraordinary sense of humor, and a surprisingly frequent tug on the heart strings.

Díaz has a gift for voice and tone and less of an interest in plot. It’s for this reason that This Is How You Lose Her is perhaps an even stronger work than Oscar Wao. Though it’s decidedly less ambitious, Díaz seems more comfortable in short-story mode, better able to express himself through economy than broad narrative arcs. In conversation with the Guardian, Díaz explains that “[the form] allows me to do that brutal chopping, to remind us of what it’s like to suddenly be evicted from a stage of our lives. But it also provides the reader the longitudinal pleasure of staying in the characters’ world for longer than one story.”

September is the biggest month for fiction. Literary heavyweights Michael Chabon and Zadie Smith have new novels this month, both of which are over 400 pages and a disappointment considering their talents. But whereas Chabon and Smith have gone for big page counts to confront sweeping ideas, Díaz prefers working in the opposite direction. While reading This Is How You Lose Her, I couldn’t help but think to myself that this is the way contemporary literature should feel and sound. Oscar Wao was an epic that exploded Dominican history, family tradition, and pop culture, yet managed to confine it to the story of a hopeless nerd. Only Díaz, the sort of author that would read several thousand short stories before penning one, could bring the same big-picture exploration of love in nine brief tales.

TLDR: A heartbreaking work of staggering genius … in stories.

My Heart Is an Idiot, by Davy Rothbart

My Heart Is an Idiot is an essay collection based on the idea that author (and Grantland contributor) Davy Rothbart is terrible with women (maybe that’s this month’s literary theme). “Some folks fall in love gradually,” he writes. “For me it always happens in an instant.” But Rothbart’s love’s labors lost are just an entryway into much bigger stories.

Rothbart is always scheming, and if it’s not to win someone’s heart, it’s to pour a bottle of his own pee on someone’s head. There’s a great essay titled “99 Bottles of Pee on the Wall,” in which Rothbart attempts to impress a cute girl by getting revenge on a scam artist that preys on self-published authors; the scene in which she realizes what he’s about to do is horrifying and hilarious. (“She looked at the pee bottle she was clutching with trembling, fearful disgust, like an accident victim coming off morphine, discovering a hook where her hand used to be.”)

Rothbart is the creator of Found Magazine, which features loose written errata, like letters, notes, and doodles discovered on the street. Its premise is based on the idea that one man’s junk is another man’s blog post (the publication has moved online). This deep interest in the lives of others, the belief that ordinary people have something interesting to say, is Rothbart’s strongest perspective as a writer. (This attitude also prevents his self-deprecating misadventures from sounding self-indulgent.) When he discovers that Nicole, the woman he’s been having phone sex with for several months, is actually a man named Aaron, Rothbart isn’t angry but simply curious. They meet at an Applebee’s, and Rothbart presses him on the appeal of dishonest tele-intimacy. (He concludes, “As Nicole, it seemed, [Aaron] managed to get his rocks off and find meaningful human contact without risking true intimacy.”)

I didn’t realize until a later essay that Rothbart is also a contributor to This American Life, which perhaps explains the author’s gift for unconventional storytelling. My Heart Is an Idiot is a collection of far-fetched stories, but Rothbart grounds his antics with humor, contemplation, and empathy.

TL;DR: Imagine an episode of This American Life featuring David Sedaris and the late David Rakoff, in which the between-act interludes feature Chet Baker’s “I Fall in Love Too Easily.”

The Signal and the Noise, by Nate Silver

The best wisdom my dad ever gave me was that smart people are honest about what they don’t know. This is Nate Silver’s nature as a writer, and largely what has made him a successful political forecaster. The Signal and the Noise explores Silver’s philosophy and methodology behind making predictions, starting with his development of PECOTA, which predicts the potential of baseball players, to his work with FiveThirtyEight, his scarily accurate political forecasting blog, now published on the New York Times website. The rest of the book is a showcase of the power of prediction, but Silver seems even more interested in its shortcomings. “We love to predict things,” he writes in the introduction, “and we aren’t very good at it.”

The first few chapters feel like a lot of throat clearing. Sometimes it reads like a clever intro class lecture (“Risk greases the wheels of a free-market economy; uncertainty grinds them to a halt”), even if it does include one of the swiftest accounts of the financial crisis that I’ve read. But Silver is interested in giving the readers the fundamentals of predictions. Power through the first hundred pages and you’ll be rewarded with the fun stuff: predicting baseball, earthquakes, and poker hands; I particularly like the chapter in which Silver explores the design of Deep Blue, that chess-playing computer that defeated Soviet champ Garry Kasparov.

If there’s a recurring theme in The Signal and the Noise, it’s how statisticians and forecasters need to learn from past mistakes. Silver shows great humility, too. One of the best sections is about the version of PECOTA that looked at minor league players, which failed when compared to the expertise of
scouts.

In the conclusion, Silver writes:

How good we think we are at prediction and how good we really are may be inversely correlated. The 1950s, when the world was still shaken by the war and was seen as fairly unpredictable, was a time of more economic and scientific productivity than the 1970s, the decade when we thought we could predict everything, but couldn’t.

The most reliable forecasters aren’t right all the time; they know what they don’t know.