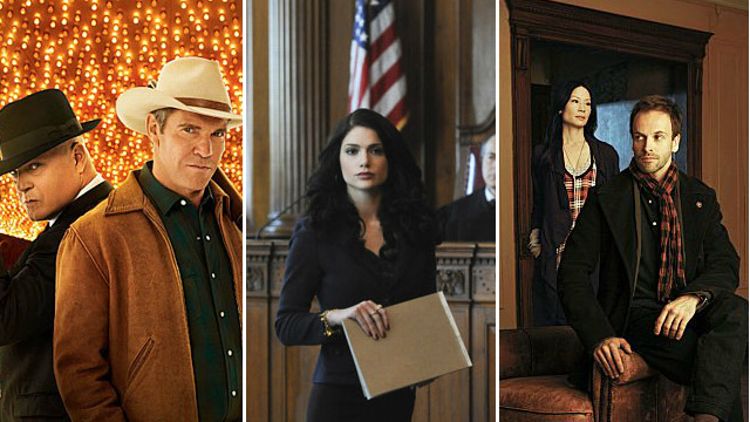 With Labor Day in the rearview mirror, it’s time to focus on the main business of the fall: television! All week, Grantland will be previewing the new TV season, one network at a time, and evaluating the first efforts of each incoming freshman. Today: CBS.

It’s not hard to joke about CBS. With an average audience age a dozen years older than Fox’s, it’s easy shorthand to dismiss the network as safe haven only for the aged, the infirm, and those otherwise incapable of changing the channel. (Remotes are so complicated these days!) Its highly rated, easily digestible shows are shrugged off by tastemakers as laugh-tracked, lame, and out of touch, all aggressive acronyms and simple resolutions. In a youth-obsessed society, it’s never super cool to be the one onstage arguing that “54 is the new 49.” The enduring image of the network suggests an elderly Ouroboros: Andy Rooney crankily lecturing an audience of Andy Rooneys, themselves either nodding in agreement or gently nodding off to sleep.

But be honest: Would you rather be the coolest person at the party or the super-rich guy throwing the party? CBS, either despite its rep or because of it, dominates the ratings in a way most casual viewers — those halfheartedly eyeballing Adult Swim while planking and/or playing Angry Birds — can’t fathom. Buzz and blogs (like, uh, this one) would have you believe that Fox’s New Girl was the breakout comedy of last season. And it was, sort of: New Girl debuted with a eye-catching 10 million viewers before settling in for an average audience of roughly half that. But out there in real America — you know, the place where Emily is recognized as the more popular Deschanel sister — 2 Broke Girls stomped on Zooey’s spectacles like a high school bully in gym class. While media gasbags like yours truly took to our fainting couches over 2BG’s ooky racism and groaning punchlines, the show had double the New Girl viewership: It debuted to nearly 20 million viewers before settling in with 10 million. No wonder CBS president Les Moonves’s public pronouncements sound less like corporate robo-speak and more and more like he’s dropping 16 on a DJ Khaled track.

And it’s not just baby-boomer bluster: At the conclusion of the 2011-12 season, CBS beat all of its rivals in total viewership by the largest margin in 23 years. It had the most-watched scripted show on television every night of the week, including Gagday, a new eighth day Chuck Lorre purchased on a whim last April with a stray residual check. While his competitors squabble over who can invent the better buzzword for failure and scrap over the remaining crumbs of viewership pie, Moonves is talking about expanding the bakery. “The first screen must come first, and there’s no second screen without it,” he lectured reporters whose faces were buried in their iPads at the upfronts in May. In a scary and changing world, CBS is Clint Eastwood threatening young punks and digital streams to get off his lawn. (It’s not, however, Clint Eastwood at the RNC. While Blue Bloods may seem like an old man yelling at us, the chair in front of it — not to mention the sofas and chaise longues — tend to be the opposite of empty.)

Still, it’s not all smiles and Geritol cocktails at CBS HQ. Yes, their continued success means less turnover from year to year, which means less of a strain on the development end. And yes, Moonves and his entertainment boss Nina Tassler run such a tight ship that bombs, when they occur, are vanished with the steely precision of a yakuza hit man. Indeed, CBS likes to brag it doesn’t cancel shows so much as eradicate them. After debuting last fall to abysmal ratings, How to Be a Gentleman was disappeared from existence so utterly that Sting wrote a song about it. But there are cracks in the façade. The procedural franchises that have formed the sturdy base of CBS’s recent dominance are graying faster than their fans: David Caruso has hung up his sunglasses, leaving us with only two CSIs, and Mark Harmon can’t keep NCISing forever. Last season’s lackluster attempt to clone the case-of-the-week formula, Unforgettable, didn’t earn its name, garnering only 12 million viewers and a surprise cancellation. (Perhaps realizing that NBC would let Moonves turn Rockefeller Center into a squash court for a number like that, CBS quietly reversed its decision in June.) Some kind of change seemed to be in order, even for the proudly conservative CBS.

Judging by the Eye’s four new series, old dogs are remarkably adaptable to new tricks. All three of the freshmen dramas are constructed around fresh concepts — or, in the case of the Sherlock-baiting Elementary, fresh-ish — with nary an acronym in sight. Better, while all are palatable for those who still think Skrillex is some sort of dish soap, none require a Social Security card to enjoy. It turns out CBS’s real brand isn’t elder care, it’s competence. There’s a sleek, measured professionalism to Vegas that’s quite remarkable; it’s well cast, tightly shot, and briskly written. All the rough edges have been sanded away from Made in Jersey like so many stray cuticles in the expert nail shops of the Garden State. One gets the sense that a hot mess like Fox’s The Mob Doctor wouldn’t have arrived with one foot in the ICU had it just passed through Tassler’s office. (The lone new sitcom, Partners, is catastrophically terrible. But, again, at least it’s consistent with the comedy brand!) It’s an impressive and stable slate from a network that’s seemingly immune to failure.

So, as no character on a CBS show would ever say, la plus ça change, la plus c’est la même chose. (French doesn’t test well outside of coastal markets.) CBS is likely to dominate for yet another season. There is a country for old men, after all. And you and I are living in it.

Combining America’s seemingly insatiable appetite for gangsters and period pieces has been the Holy Grail for television programmers ever since Tony Soprano ceded the zeitgeist to Don Draper. While this has led to boom times in the highly specialized extras-who-can-portray-dead-prostitutes industry, the results have otherwise been hugely disappointing, with expensive cable duds like Magic City  and Copper littering the carpet like the butts of so many unfiltered faux-cigarettes. Hard to believe, then, that stodgy CBS has cracked the code. Written by Nicholas Pileggi (Goodfellas, Casino) and ably directed by James Mangold (3:10 to Yuma), Vegas is more or less based on the true exploits of Sheriff Ralph Lamb, a swaggering cattle rancher turned lawman in 1960, back when the infamous Strip was really more of a burgeoning burlesque. As Lamb, the always dependable Dennis Quaid stomps around as if he’s got a chip on his shoulder, a plug in his jaw, and a mess in his pants, and the rest of the cast is equally fine, featuring Michael Chiklis as a meticulous mafioso and the statuesque Carrie-Anne Moss — visibly relieved to be surrounded by slot machines rather than CGI tentacle-rape robots — as an assistant district attorney. Perhaps taking a cue from the implacable Quaid, there’s an inviting ease to the show’s retro sheen and an appealing hint of low-stress serialization rare for any network, let alone CBS. I wouldn’t bet against it.

UNSCIENTIFIC PREDICTION: At least four seasons, but a move to the less stressful Friday night might be in order. Vegas always makes more sense on the weekend, anyway.

A zippy hour about a plucky fish out of water isn’t the usual CBS fare — it’s much easier to imagine Jersey succeeding on the more femme-friendly ABC, where it would be called Very Pretty Betty and feature a lot more Snow Patrol songs. But MIJ, starring the British minnow Janet Montgomery as a blue-jeaned associate floundering at a white-collar Manhattan law firm, exhibits CBS’s trademark flair for streamlined storytelling. Case in point: Creator Dana Calvo’s spunky pilot doesn’t linger too long on bridge-and-tunnel clichés, like Montgomery’s Martina recognizing pliers as a tool for skinny jeans, not murder. Rather, it wastes little time getting down to the underappreciated business of aspirational dream-making: Aided by an affably slick boss (Kyle MacLachlan), a loyal pal in the secretarial pool (Toni Trucks), and a proud Mama Mia (Donna Murphy), Martina cracks the cases that those lacking a deep appreciation of the Southside Johnny catalog never could. Even with Stephanie March’s impossibly smug, straw-woman antagonist (“You speak fluent townie,” she huffs. Is this Midtown or Monaco?), Jersey, surprisingly, won me over.

UNSCIENTIFIC PREDICTION: The Friday death slot — where it will appeal to the approximately zero young women who will be home that night to enjoy it — proves CBS doesn’t quite understand what it’s got. A swap with Vegas would make sense to keep Jersey out of the Meadowlands.

The inspirational story behind Partners — about the IRL gay-straight alliance between Will & Grace gazillionaires David Kohan and Max Mutchnick — is no doubt delightful when recounted over passed canapés at a cocktail party. But extrapolated into a shticky multi-cam sitcom, it’s naval gazing of the first order. Stars David Krumholtz (Numb3rs, The Newsroom) and especially the charismatic and kinetic Michael Urie (Ugly Betty) do their best with a raft of flaccid dick jokes (“Stop, that’s what your schmeckel is telling you!” Tip your waitress, folks!), but the essential premise — Krumholtz is a straight everyman in love-love with fiancée Sophia Bush, a jewelery designer, and friend-love with Urie, an unstable lunatic — is emotionally bogus and, worse, baldly manipulative. (The shrieking laugh track is aided and abetted in maudlin moments by even more liberal use of the “aww” track.) Ignore your schmeckel. Ignore this show.

UNSCIENTIFIC PREDICTION: CBS’s dominant Monday-night comedy block will tolerate many things — bottom-feeding ethnic humor, Charlie Sheen — but uninspired hackery of this level isn’t one of them. Out of business by Election Day.

Among the many things proved by Sherlock, the BBC’s magnificent modern-day reimagining of Sherlock Holmes, is that a great character can be extrapolated into nearly any time period or locale. So it’s worth giving Elementary, a rather shameless attempt at duplicating Sherlock’s success on this side of the pond, a fair shake. Jonny Lee Miller’s (Trainspotting) consulting detective is a recovering junkie and flourishing S&M addict recently relocated to New York City, where he’s placed under the watchful eye of Lucy Liu’s Joan Watson, a surgeon turned recovery counselor. Together, they halfheartedly flirt (it’s hard to tell if Liu is being complicated or merely wooden) and wholeheartedly investigate murders on behalf of a gruff and jowly Aidan Quinn. With its lively pace and forced bluster, it’s all a great deal more like House than Holmes, which is forgivable considering the nature and length of an American television season. But the bigger flaw is structural: You can’t sell an audience on the world’s greatest detective without providing him with the world’s most devious cases. The creaky pilot plot — involving a clearly guilty widower and a bag of rice — could be uncovered by the twee P.I. from Bored to Death with time for a single-origin macchiato to spare. For Elementary  to succeed, it’ll have to do better at the hard work necessary to have its Holmes make it all look easy.

UNSCIENTIFIC PREDICTION: With an established franchise and lead-ins stronger than the stuff Sherlock enjoys injecting into his veins, ratings should be good enough to keep Miller in a deerstalker at least through May.