Kitsch and a Witch: Tim Burton’s ‘Big Eyes’ and the Movie Musical ‘Into the Woods’ 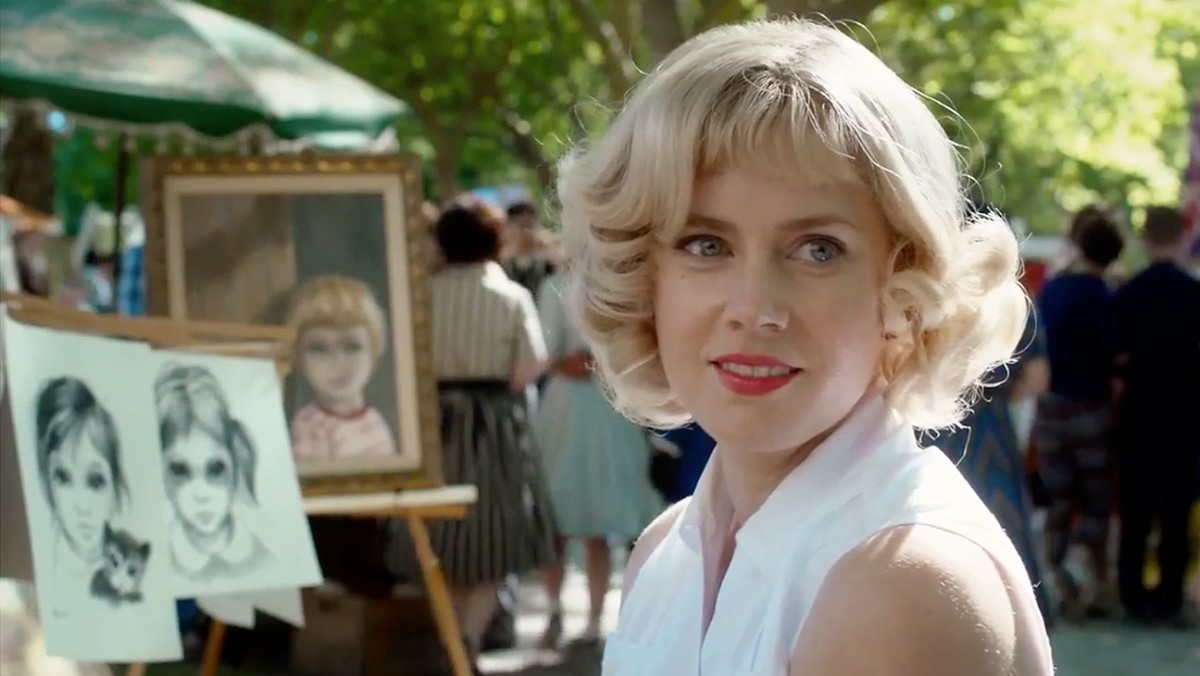 Big Eyes is Tim Burton pretending to be ordinary. It’s a small dramatic comedy of sorts. It’s got a decent script from Scott Alexander and Larry Karaszewski (they wrote Burton’s Ed Wood), an approachable concept, and it didn’t cost $250 million. The movie is set in an actual city — beat-era San Francisco. The houses and restaurants and galleries are all life-size. But the movie slips into Burton-esque derangement anyway. All the plain surfaces start to turn sideways the instant Walter Keane (Christoph Waltz) walks up to Margaret Ulbrich (Amy Adams in a blond wig) in 1955 and then makes her Mrs. Keane. They meet in the park, where each is selling paintings. She’s with her daughter, doing her big eyes. He does generic street scenes. You know something’s off when you see Waltz in Breton stripes and a beret. He looks like a mime on the lam.

The movie is based on the true story of how, for years, Walter took credit for Margaret’s popular kitsch paintings, mostly of big-eyed children, until she took him to court. Walter’s day job is real estate. He’s supposed to be the sort of con artist who can easily seduce. Within two or three scenes, he’s won over Margaret, a divorcée and single mother from the South who’s new to San Francisco. Her girlfriend DeeAnn (Krysten Ritter) smells a rat, but Margaret goes with it. Walter tries to show their paintings, but he fails to get a gallery to take them. “Clear out the gutter before the taste police arrive,” jokes the aggrieved owner (Jason Schwartzman). So she and Walter hang them in a nightclub. The owner (Jon Polito) puts them near the bathroom. One night, a woman gets her man to buy one of the big-eye paintings (she responds to the sadness in them), and gradually the paintings go from a thing to the thing. And right before they take off, there’s a moment when someone in the club asks Walter and Margaret who the artist is, and Walter steps forward and claims credit. Having one of Margaret’s paintings seem to stare back at her is a nice touch.

Shows ensue, and, to the horror of Schwartzman’s gallery owner, there’s a lot of interest. But it’s not until Walter has the idea of selling posters that the big eyes really take off. The marriage, meanwhile, veers into a kind of passive abuse. He gallivants around the gallery chatting everyone up while Margaret stands more or less alone, smiling through her bewilderment. Eventually, the money rolls in, and they move to a big new house, where she becomes a kind of sweatshop captive, toiling away in a private studio that her daughter is never to enter. Margaret’s bitterness (or Adams’s breathy rendition of it) keeps her from being pathetic. When Walter realizes he needs a story for the paintings, Margaret quips, “Looks like you painted yourself into a corner.” He comes up with a doozy of a backstory, something about children and the horrors of war. His sentimentalizing makes the paintings even more popular and draws the notice of a newspaper society columnist, Dick Nolan (Danny Huston).

Even after she lets the cat out of the bag and the Keanes square off in court, Adams comports herself with the innocence that helped make her a star. (When DeeAnn mentions espresso, Margaret says, “What’s that? Like reefer?”) The movie doesn’t ask much of Adams. She underplays everything (anger, epiphany, satisfaction), maybe in preparation of getting out of Waltz’s way. This is one of the strangest examples of an actor and director flouting egregious miscasting by making it seem as though everything’s fine. Waltz is doing Charles Boyer in Gaslight, Jack Nicholson in The Shining, Jim Carrey in Liar Liar — at the same time. He blows a gasket after about half an hour and never stops hissing. When the art critic John Canaday (Terence Stamp) gives Walter a withering on-the-spot critique, Mount Waltz explodes. Walter’s German accent is never explained (the actual Walter was from Lincoln, Nebraska) and seems weaponized to enhance villainy. This is a Kevin Spacey part that Waltz plays with a pitchfork and horns. He’s working so hard at passion and comedy and deviant charm that you’re embarrassed for him.

As much as this movie might have seemed personal to Burton, it lets the fraud upstage the artist. Margaret’s relationship to these surrealist images is vague. They seem to predict the suffering she experiences while married to Walter. But her explanation of what they’re all about feels dramatically and psychologically inadequate. You get why Walter’s made-up backstory took off: It’s characteristically manipulative. What emotional connection there is between Margaret and the paintings comes mostly from Adams.

There’s comedy nonetheless. “I’m an artist,” Walter, representing himself at the trial, tells the judge, who replies, “Maybe.” The courtroom scenes don’t quite top the aggrandized shenanigans in Alexander and Karaszewski’s script for The People vs. Larry Flynt. But they get the lunacy of the event. At this point in the film, though, Burton’s lost a feel for the tone. For most of Big Eyes, he’s as much a fish out of water as Margaret — or a fish who doesn’t like that he’s gone from the ocean to a cup. His rhythms with characters who operate at a human scale are off. Naturalism doesn’t come naturally to him, so a car can’t even pull up to a curb without music being dumped all over the shot.

The air of Hitchcock that drifts through these scenes is welcome: the Bay Area setting, the idea of delusion and deception, Adams’s resemblance to his heroines, the use of Krysten Ritter as a Thelma Ritter–type skeptic. But Burton might need to get further from blockbuster bloat in order to regain his formal mastery of kitsch. Right now his sense of comic portraiture is too easily mistakable for splatter painting. 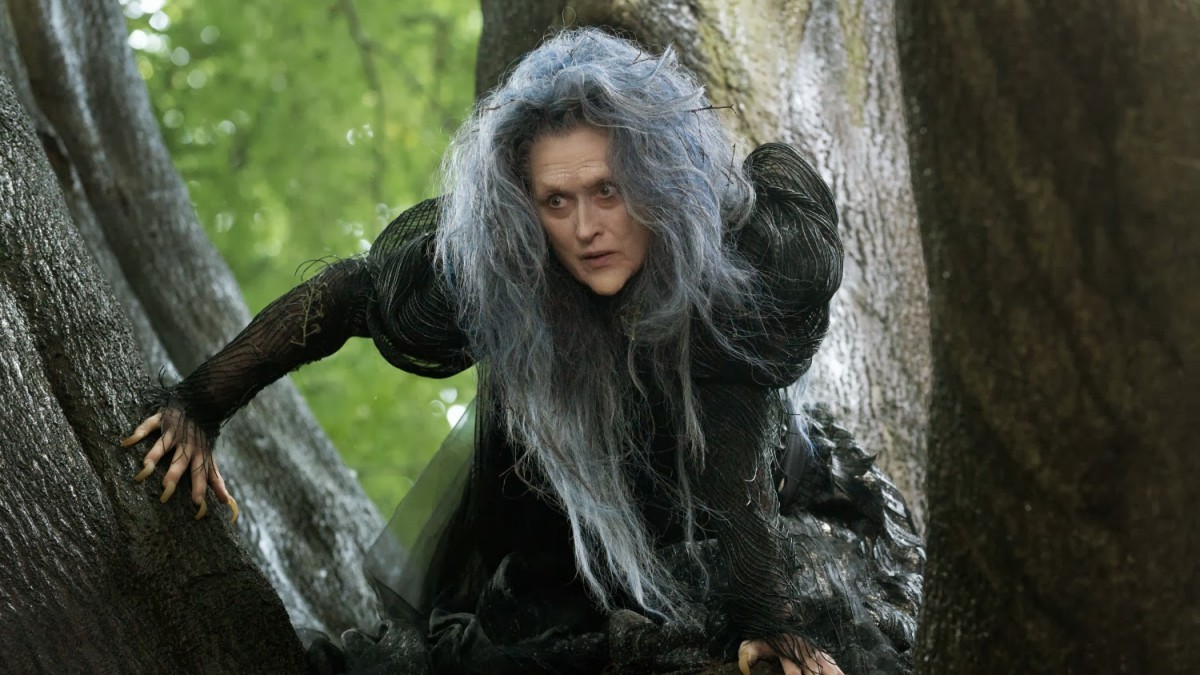 Speaking of splatter, the best thing (one of them, anyway) about the movie adaptation of Stephen Sondheim’s fairy-tale musical Into the Woods is the appalled, terrified face James Corden’s Baker makes whenever Meryl Streep’s witch crashes one of his scenes. It’s the look you give someone caught in the act of robbing you. It’s the look you give before an armored truck runs you off the road.

Streep blasts into this movie like a hurricane-force wind, spits out her lines (even the ones she’s singing) like there’s a hair in her mouth, then explodes into leaves or dust. It’s a wonder that Corden’s exasperated baker doesn’t also crack up. Johnny Depp has two scenes as Little Red Riding Hood’s wolf, but Streep is the one huffing, puffing, and blowing down the house. Eventually, she’s given blue costumes, blue makeup, and blue hair. She’s like an enormous Boo Berry. The night I saw it, the audience burst into applause every time Streep finished a number.

The movie, which Rob Marshall directed, doesn’t care that much about James Lapine and Sondheim’s show, which arrived on Broadway in November 1987. It’s being sold by Disney as a fun tongue-in-cheek fairy tale. The theater show is full of sexual anxiety, guilt, and loss. But Marshall, who did Chicago and Nine the way a blender does ice, is working for the sophisticated kiddies who might be in the audience. He lets the Freudian ideas come to the surface. And the tale itself marches along a pretense of fun. This is a more tolerably executed operation than Marshall’s other two musicals. The staging is mostly logical, and he’s kept things extremely watchable, even at the expense of the show itself.

The story of this baker and his wife (Emily Blunt) trying to reverse an infertility curse (cast by the witch, and it’s a long story) weaves in and out of the tales of Cinderella (Anna Kendrick), Jack (Daniel Huttlestone) and the beanstalk and his mother (Tracey Ullman), Little Red Riding Hood (Lilla Crawford), and the drama of the witch, who happens to have locked away Rapunzel (Mackenzie Mauzy). Most of these people wind up in the forest together, with the baker, his wife, and the witch warping the trajectory of the tales to get what they want. Sondheim and Lapine’s exploration of cynicism, lust, and human nature is mostly still intact, often courtesy of the emotional thoughtfulness that comes through from Kendrick and especially Blunt.

The emphasis is placed on the comedy, which still works. There are Streep’s spasms and Cordon’s mugging but also Christine Baranski, Lucy Punch, and Tammy Blanchard forming what amounts to Godzilla’s three-headed Ghidorah, which feasts on its step-relative and house-wench Cinderella. Chris Pine plays her prince, finding another hilarious variation on William Shatner. He and Rapunzel’s prince (Billy Magnussen) square off in song (“Agony”) while standing on rocks at the edge of a waterfall, throwing opening their legs and thrusting their crotches at the valley below. But their parody of creamy, dreamy hotness is missing the disillusionment of the reality of husbandhood that’s been removed from the film. Most of the original show’s senses of moral (or cosmic) consequence and emotional deflation are gone.

The movie is a watchable, tuneful contraption. There are songs within songs within songs, persuasively sung, and clever roundelays among the characters. It’s as dreary looking as quasi-realist movie musicals tend to be since Bob Fosse, but Marshall doesn’t try to ape Fosse the way he did with his previous two musicals. You just get a sense of compromise here, that something is missing. The film adaptation, which is credited to Lapine, has clearly neutered its source. The deep cut of immorality and regret doesn’t penetrate as far. It’s more like a fantastical flesh wound. The body count is smaller, the air of angst thinner. It’s a fine musical. But, at best, it’s diet Sondheim. He just isn’t worth doing if you’re going into the woods only to wind up in the weeds.