This Was Not Our Woodstock: Remembering Live Aid 30 Years Later 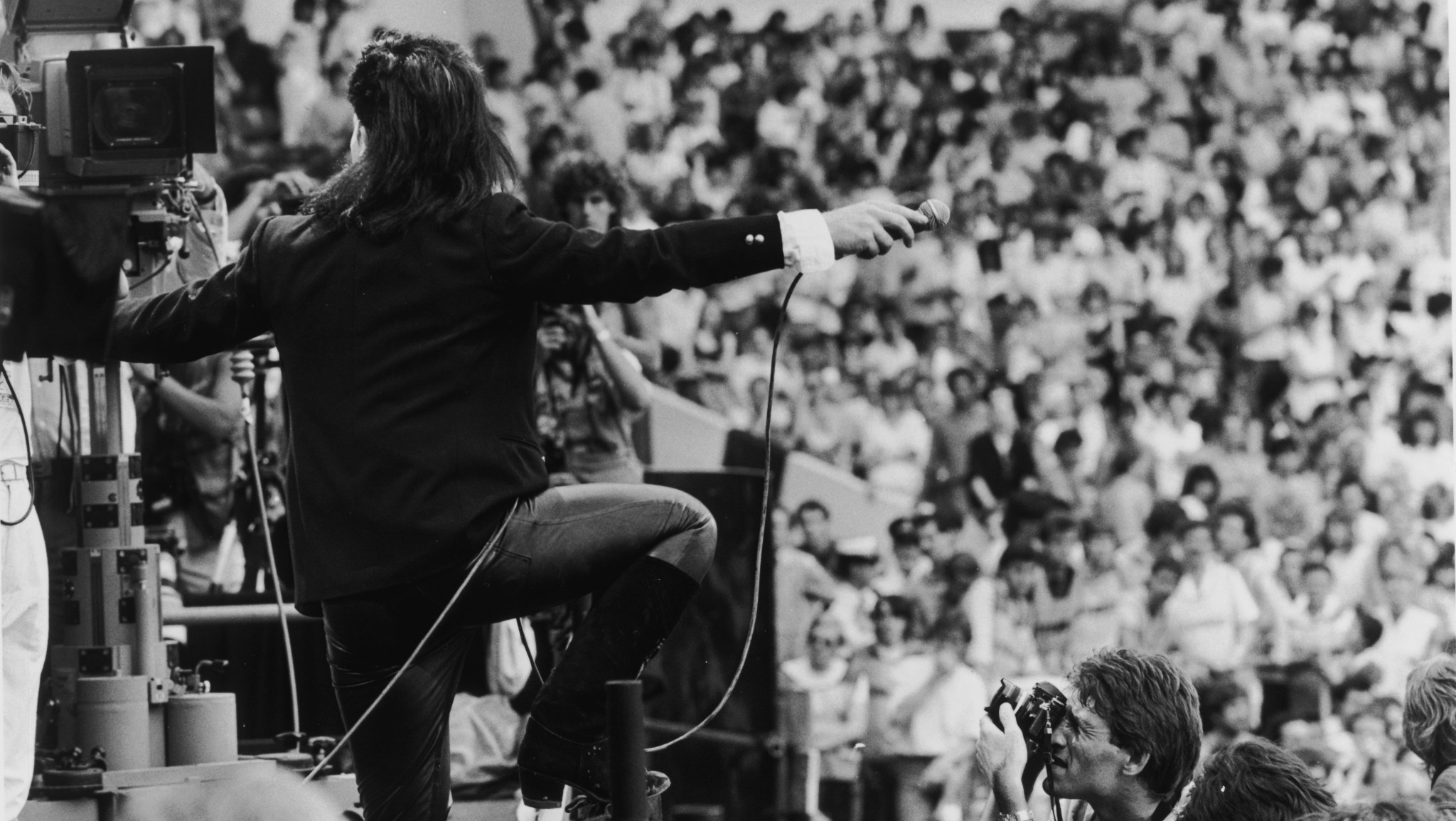 “This is your Woodstock.”

Let me admit up front that I didn’t get there in time to hear it, but Joan Baez did say it to those assembled in Philadelphia for the start of Live Aid — it was confirmed in the issue of the New York Times that was published 30 years ago on this date, the day after the show. And she wasn’t wrong, mind you. It’s just that the all-day,  two-continent, whole-lotta-white-rockers benefit show of three decades ago — which indisputably did raise some $127 million for African famine relief — was like so many of the gatherings of the early to mid ’80s, such as the US Festival or the 1982 anti-nuke shows: an event supposed to be fraught with cultural and generational significance that was not.

I wasn’t backstage in Philadelphia, either. My press pass that day must have been a vestigial blessing of sorts from my just-completed years at Rolling Stone; it offered access to the floor of the concert, but not to the performers themselves. So I also did not see the selfsame Baez, the ever-radiant and peerless political activist, striding up to Miami Vice’s Don Johnson (then the actor of the moment turned rocker wannabe) and — according to her memoir — greeting him with the full-on come-on, “Hello, gorgeous.” Also not wrong! Even more than her Woodstock welcome, it says a lot about Live Aid: The hottest guy in the place — “a man-man, not a boy-man” — wasn’t a musician or a movie star, but a Friday night network television lead.

I’d arrived there via train from New York, having spent the morning watching bits of the London show on MTV, all in an era when top-quality live music on TV was still a remarkable thing to behold. If ever-unreliable memory serves, there was co-organizer Midge Ure of Ultravox, pitch-perfect on “Dancing With Tears in My Eyes”; Elvis Costello noting, “I want you to help me sing this old Northern English folk song” — slyly referencing the name of the Beatles’ publishing company before singing “All You Need Is Love”; Wham!’s George Michael joining Elton John onstage for “Don’t Let the Sun Go Down on Me,” which had me wondering if this performance might be the greatest, or at least one of the happiest, moments in George Michael’s life. (Sadly, it might still be.)

And then there was U2. My former MTV News colleague Jim Fraenkel told me last month that he feels that Live Aid performance is what truly broke the band in America, a defiantly long 17-minute set that featured an extended, spaghetti puttanesca version of “Bad” that I’d first gotten a taste of at a festival in Dortmund, Germany, in November 1984. There, I watched the show, interviewed the band members in the hotel bar each night, and then afterward called Sports Phone — (212) 976-1313 — from my room … which is how I learned that Doug Flutie had thrown a pass to Gerard Phelan to beat Miami. I was slated to spend time with Bono in Dublin, but he was summoned instead to London … for what turned out to be Band Aid and the recording of “Do They Know It’s Christmas?” That studio session began the chain of events that led to more than 100,000 assembling at John F. Kennedy Stadium in 1985.

Doug Herzog and Lyndsey Parker each offer excellent, detailed recollections of that day. Michael, Bruce, Prince, Stevie, Rod … none was in attendance. Madonna was, though — newly married and nudely revealed on dueling, rushed-to-the-printer-and-looked-it covers of Penthouse and Playboy.1 No matter, of course: She wisecracked about it and soldiered on — bulletproof, indomitable, bound for glory in ways we couldn’t even imagine yet.

I don’t recall Simon Le Bon hitting that epic clam during Duran Duran’s set; I do remember a charismatic Steve Stevens on guitar throwing the same sort of unusual chords into his cover of “Revolution” that Andy Taylor put into his “Bang a Gong” rendering. Led Zeppelin — for surely it was they, three-fourths of them, with a freshly Concorde’d Phil Collins doing the London/Philly Live Aid double and sitting in on drums — gave what would be universally regarded as a shambolic performance. And yet … as they began “Whole Lotta Love,” I did look back into the crowd to see entire sections virtually heaving, surging en masse in near-oceanic up-and-downs, the way only terraced fans of English soccer teams did after goals in that era. Even with Bob Dylan onboard — who’d had his own “Hello, gorgeous” encounter with Joan Baez two decades earlier2 … as night fell, it became more and more like a TV show and less like a concert, state-of-the-’80s sizzle between old Altamont friends Mick Jagger and Tina Turner notwithstanding.

I left the way I came, through that back entrance … and there, I saw a man in a wheelchair with a wan smile being assisted out of the venue by a host of helping hands. It was Ronnie Lane, once the heart and swaggering soul of the Faces, now incapacitated by multiple sclerosis. Two years earlier, he himself had been the chief beneficiary of a series of shows, known as the ARMS Charity Concerts, guitar-wailing all-star events that had brought together the likes of Jimmy Page and Jeff Beck … who along with Rod Stewart would fund Lane’s care for years afterward until the latter’s death in 1997.3

Fans would look for their Woodstock amid the rains in 1994 … and the oppressive heat of 1999 … with varying degrees of success and good humor, as was carefully explained to me then. Don Johnson turned up at the NBA Finals this year, where he was captured on camera scanning the room during a break in the action, perhaps in search of the socially conscious. And the indefatigably politically active Joan Baez, who through her 57-years-and-counting career never needed a star-studded, two-continent event to Do Unto Others, plays a concert in Germany tonight.

‘Jalen and Jacoby’: Special Guest 50 Cent on ‘Southpaw,’ the Music Industry, and His Bankruptcy Controversy