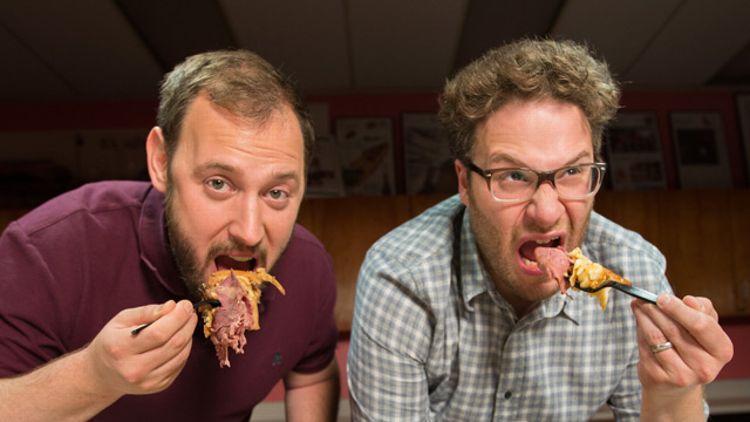 Here’s the first question: How high were Superbad buddies Seth Rogen and Evan Goldberg when they came up with the idea of an R-rated animated feature called Sausage Party, which EW details as “one sausage’s quest to discover the truth about his existence”? (Side question: Which sausage enterprise do Rogen & Co. owe a thank-you card for supplying that particular night’s munchies? Premio? Jimmy Dean? It was you, wasn’t it, Jimmy?)

That marijuana mystery has been vexing us for three years, though — since the premise was unveiled. Now we’ve got a bigger question: How high did the Superbros have to be to go to Megan Ellison’s Annapurna Pictures, the crucial producer behind prestige porn like Zero Dark Thirty and American Hustle as well as singularly envisioned critic bait like Spring Breakers and The Master? Rogen and Goldberg definitely invented some new swimming pool–size smoking device to get loopy enough to try the latter, but it totally worked — Annapurna is producing and Sausage Party is coming in 2015. Sony Pictures is also on board, as is Conrad Vernon (Shrek 2, Madagascar 3), who directed Rogen in Monsters vs Aliens.

Assuming this pristine script hasn’t changed much since 2010, we can expect a “super dirty mockery of a Pixar movie about sausages in a supermarket that need to get back to their aisle before the fourth of July,” as Goldberg said back then. As far as precedents, there aren’t many. South Park: Bigger, Longer & Uncut earned $83.1 million worldwide in 1999 and went on to become a moderate cultural staple; Beavis and Butt-head Do America made $63.1 million in 1996 but wasn’t that great and wasn’t rated R. Add up the raunch, the rating, the pedigree, and the scale, and Sausage Party is film’s final frontier.