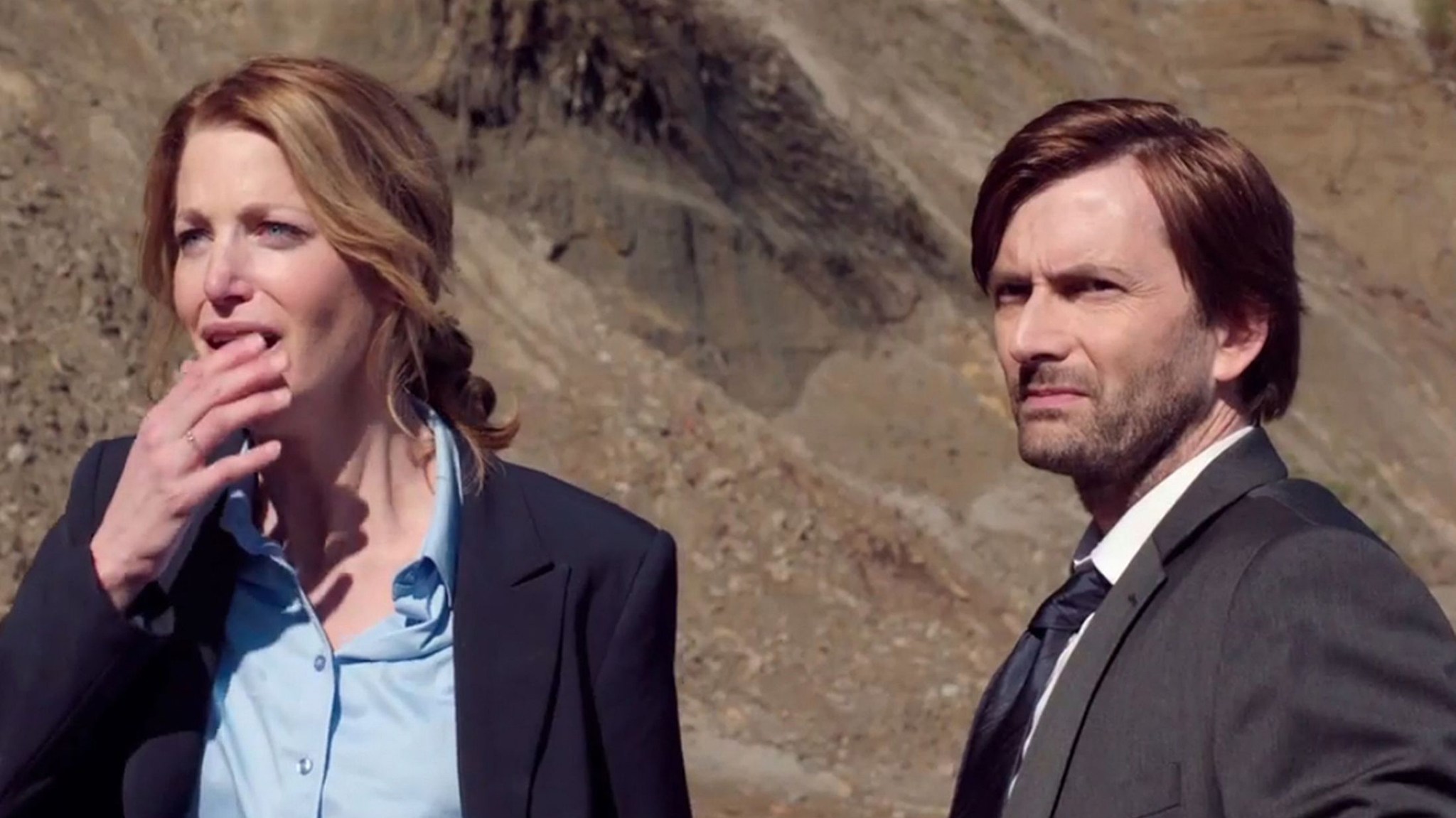 Warning: This piece includes spoilers of the shows Gracepoint, Broadchurch, and Southcliffe, and the movies Mystic River and Saving Private Ryan. Also, this is not particularly upbeat stuff.

I hate to ask a favor of you in the first sentence, but I need you to help me out. Imagine the worst thing that could plausibly happen to you. Not like some dark fantasy of being a shark’s dinner, or getting chained to a radiator in the Saw guy’s custodial closet. Something real. Not something that keeps you up at night — something that shocks you while you’re daydreaming. Daydreams are where we think of the real stuff. Imagine something terrible happening to someone you love. Imagine what you would be doing when you found out — how banal it would seem. Imagine who would tell you. Imagine how they would tell you. Imagine how you would react — would you fall to pieces, fall down, break something, break up inside? Imagine the ripple effect this tragedy would cause in your life, and in lives around you — you house, your family, your community.

You can’t do it, right? You get however many steps in, and you have to stop. It’s too much to contemplate. That’s OK. Right now, someone, somewhere in Hollywood is doing it for you.

Andy Greenwald wrote a couple of weeks ago, when talking about Showtime’s The Affair, that, “lifeless bodies are the coal that keep the story fires burning.” He’s right. From cult faves like Hannibal to decade-plus-spanning franchises like CSI and Criminal Minds, nothing makes us feel more alive than asking who done it, and how.

Further out on the margins, though, there is an alternative energy source — a different kind of procedural. They are interested in the dead bodies, sure, but they’re equally concerned with all the wreckage those bodies leave in their wake.

These alternative procedurals are not always cop shows, but they always utilize a particular trick (that happens to be often seen in cop shows). A friend calls it the bad-news relay, and if you have watched anything from Friday Night Lights to The Killing, to more recent fare like The Leftovers, Broadchurch, its American cousin Gracepoint, or the British, small-town shooting miniseries Southcliffe, you have seen it. It is the meticulous rendering of the exchange of information regarding a terrible tragedy.

I think I first became aware of this phenomenon while watching Steven Spielberg’s Saving Private Ryan, about 15 years ago. There’s an early scene in which a mother finds out that three of her sons have been killed during WWII, and her surviving son (the titular Ryan) is missing in action, in France.

This information is bad enough, and it comes on the heels of one of the most harrowing and visceral visions of combat ever shot. A bunch of officers discuss the matter and how the mother is about to find out about all the deaths on the same afternoon. Spielberg being Spielberg, it doesn’t stop there. The next thing we know we are taken somewhere in Iowa, literally among amber waves of grain (OK, corn). The John Williams strings swell and a long, drawn-out sequence commences, in which a chaplain and an officer come to tell the mother about her children.

By the time they make their way up the dusty road to her house, she knows. It’s almost as excruciating as the beach invasion we just witnessed.

I noticed it again in Mystic River, a few years later, in 2003. Sean Penn basically sewed up a Best Actor Oscar by screaming, “Is that my daughter in there?!” at Kevin Bacon’s homicide detective, while Clint Eastwood’s camera refused to break its stare. Mystic River’s plot — three men, shaped by a childhood tragedy, collide as adults in Boston’s underworld — is not particularly notable. It was the parts of the story Eastwood chose to linger on that made it special. Rather than focus on the cops or robbers, he was curious about the misery they left behind. This wasn’t just crime fiction, it was devastation porn.

I can’t pinpoint exactly the first time I saw this on television, though I recall moments on Homicide: Life on the Street — specifically the Robin Williams episode, “Bop Gun” — when grief is as deeply investigated as crime. Whenever it started, I know you can’t miss it these days.

On Thursday night, Fox will broadcast the fourth episode of its 10-episode limited series Gracepoint. The show shares quite a bit with the British original from which it’s been adapted, Broadchurch: same basic plot (a young boy is found dead, and an entire town’s population is seemingly a suspect), same basic characters (a Difficult Man detective and his nurturing female partner), similar setting (small, seaside town). Gracepoint even has the same actor playing the lead role (David Tennant). You’d have to assume that whatever the American version ported over from the original was done because the network thought it would be aesthetically and commercially viable to re-create it.

Gracepoint is apparently going to deviate from Broadchurch at some point,1 but the first episode is a near shot-for-shot remake.

The bad-news relay in the opening episode is an agonizing look at a normal day in the life of a family. A mother is going about her day when she realizes her son is missing. A commotion leads her to the beach, where she finds a crime scene being investigated. There she sees her son’s shoes sticking out under a blanket, forensic technicians looming over. Soon, two detectives — the show’s protagonists — arrive at the family’s house to confirm that the victim was indeed their son.

Everything — the long shot of the mother running down a road filled with bumper-to-bumper traffic, her discovery of the body, the way the sound drops out, the way the family and the detectives play musical chairs when they arrive at the house, the way the mother interrupts them and the father chides her — is the same between the shows.

I have watched both scenes half a dozen times. The creative minds behind the Fox show must have decided to produce a reenactment, rather than an interpretation, for a reason. The first time I saw this sequence, in Broadchurch, it was heartbreaking. There was something about the way the camera refused to look away from a mother retching with grief … I couldn’t look away. It’s because I remember my reaction to Broadchurch’s first episode that Gracepoint felt so manipulative and gross. You could make the argument that this was a piece of theater being faithfully restaged, but because of the raw and tragic material, I felt more like a mouse in some kind of experiment. Let’s see if he watches the crying family again.

It’s not all Gracepoint’s fault. There are only so many times you can watch someone have the worst day of their lives. In the last year I’ve seen it happen on the The Leftovers, which at times felt entirely like a bad-news relay — especially the flashback episode in which we got to see the actual moments when many of the characters have their loved ones literally ripped from them. And it isn’t Gracepoint’s fault that I had just watched Southcliffe.

Southcliffe was a four-part miniseries, originally aired last August, on Channel 4 in the U.K.; it’s now available on Netflix for streaming. It’s about a mass shooting in a small town. Like Broadchurch and Gracepoint, it examines the media storm that usually follows such an event, and the various ways people try, and sometimes fail, to recover.

There are bad-news relays in the series, though they’re harder to outline. Director Sean Durkin (who also made the cult religion drama Martha Marcy May Marlene) painstakingly elicits investment in each of the victims and their families. We see who loved them, who was cheating on them, who was living for them. I dare say their next of kin suffer more than they did.

The show is different from its tragedy merchant brethren because it asks different questions. We know, early on, who is responsible for the murders. What Southcliffe investigates is how far the culpability can spread, whether there’s any such thing as closure for something so destructive, and, most profoundly, whether we can even understand something like this. Some of the questions find answers, and some of those answers are a bit banal. But I appreciated that it asked different questions to begin with.

Maybe we’ve gotten to the outer limits of what we can take from a crime scene; now we want to see what happens to the people left behind. These kinds of shows have a limited shelf life, too, though. I mean, how often can you go through something like this as a viewer? Life, after all, is too short.