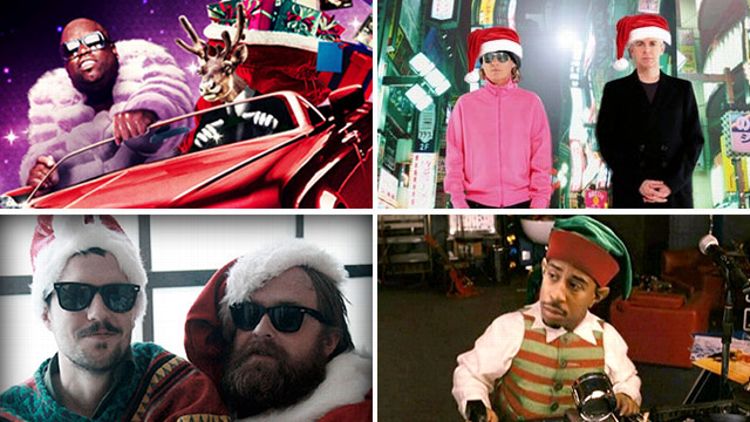 Every year, hordes of overly spirited musicians try to capture Christmas cheer in the studio. While there are some artists who can, in fact, create a respectable modern-day holiday tune, it’s safe to say that they’re few and far between.

Many holiday enthusiasts fail in attempts to cover songs from the Christmas canon, performing lackluster versions of songs such as the Vince Guaraldi Trio’s “Christmastime Is Here” or “The Little Drummer Boy” for the millionth time. For the most part, these have nothing new to offer.

Others, knowing they can’t top Burl Ives or Brenda Lee, try to create their own original holiday songs. A select few of these brave souls actually do it right. Run-D.M.C.’s “Christmas in Hollis” and more recently some of Sufjan Stevens’s prolific holiday tidings provide two contemporary examples. Everyone else? Their efforts fall somewhere between getting coal in your stocking and Santa blowing out your eardrums.

Being the holiday sadists that we are, we decided to seek out the worst of the worst contemporary holiday originals. To do so, we used the following criteria:

Using those three guidelines, we then chose one horrendous Christmas song from each of the past 10 years and briefly examined where each holiday song went horribly wrong.

Why it’s awful: Let’s just say that front man Ian Anderson should’ve left the rampant Christmas flute solos back in the ’70s when the novelty was still perhaps slightly appreciated.
Select Christmas-y lyrics:
“Have some time off for good behavior. Forty days, give or take a few.
Hey there, sweet baby Jesus … Let’s share a birthday card with you.”
Career marker: The Jethro Tull Christmas Album was the band’s 21st album. They have not released anything since then, so it appears that Jethro Tull have placed a self-imposed ban on themselves for the time being.

Why it’s awful: It’s sincere. And like many R. Kelly creations, it’s sincere to a fault.
Select Christmas-y lyrics:
“I open my eyes,
And to my surprise,
I’ve come to realize that …
All around the world, it’s Christmas.”
Career marker: “World Christmas” merely hinted at the brilliance of the never-ending song cycle “Trapped in the Closet,” which would follow just one year later.

2005: Fountains of Wayne, “I Want an Alien for Christmas”

Why it’s awful: Here, the Fountains of Wayne exhibit what happens when musical irony goes haywire.
Select Christmas-y lyrics:
“I want an alien for Christmas. Bring me an alien this year.
I want a little green guy, about three feet high
with 17 eyes,  who knows how to fly.”
Career marker: Two years after “Stacy’s Mom” hit the airwaves, the NYC group’s wry power pop began to lose steam.

Why it’s awful: Brandon Flowers tries to get real with the kids about his holiday nostalgia, but instead destroys any sense of Christmas spirit that may still linger within the hearts and souls of young Killers fans.
Select Christmas-y lyrics:
“Now the girls up the street are innocent and sweet, well they’re all in bed.
They got their makeup and dreams, wonderland sprinkled inside their heads.
Soon they will change, but tonight Hollywood has never seemed so strange.”
Career marker: “A Great Big Sled” was the first of six Christmas singles, which all unfortunately came out in 2011 on the (RED) Christmas EP.

Why it’s awful: It’s worse than his role in Fred Claus, a 2007 Christmas comedy starring Vince Vaughn, which features the Atlanta rapper as a miniature elf. The movie earned a 21 percent rating on Rotten Tomatoes.
Select Christmas-y lyrics:
“I tell them all I want for Christmas is two gold front teeth,
and 10-karat diamonds on a fat gold wreath.
That I could wear around my neck, get money and respect.
Tell Santa Claus to bring us 10 million–dollar checks
so I can spread a little cheer and fly a couple Lears.”
Career marker: The movie’s music supervisor made the conscious decision to leave “Ludacrismas” off the soundtrack, even through the song showed up in the movie.

Why it’s awful: The whole song is bad, but the lyrics are especially baffling. And after listening to the song dozens of times and making several attempts at a thoughtful lyrical analysis, I’m still uncertain how a pimp would celebrate the holidays. In all seriousness, Snoop raps for a verse, giving a full-on 7 percent effort, before two rappers fall flat while trying to take things more seriously.
Select Christmas-y lyrics:
“December 25th, a pimp’s Christmas.
Let me check my gift list, I’m on some pimp shit.
Yes, indeed, I proceed to roll up the trees.”
Career marker: There’s a reason why, despite having achieved mainstream success for a decade and a half prior to this album, that Snoop Dogg Presents Christmas in Tha Dogg House only received a digital release.

Why it’s awful: Bing Crosby has already contributed to some of the finest Christmas numbers ever (and one of the weirdest). When you thought his Christmas legacy could be left untouched, the Pet Shop Boys had to ruin it with this holiday atrocity.
Select Christmas-y lyrics:
“Bing Crosby, Bing Crosby,
Are you listening to me?
It doesn’t often snow at Christmas
the way it’s meant to do.
But I’ll still have a glow at Christmas
because I’ll be with you.”
Career marker: This was originally a limited release in 1997. The band reworked it into a new version in 2009. We’ll let the new version speak for itself.

Why it’s awful: Chris Martin delivers another boring tale of pensive introspection and lament that possesses as much tryptophan as a 31-pound turkey.
Select Christmas-y lyrics:
“Christmas night,
another fight.
Tears, we cried a flood
Got all kinds of poison in my blood.”
Career marker: “Christmas Lights” arrived during a down cycle in the British arena rockers’ career. Rather than focus on the next actual album, which would come in the form of 2011’s Mylo Xyloto, Coldplay did what many bands do at that point in their career, which is go through the motions and pen an uninspired snooze fest of a Christmas song.

Why it’s awful: The whole song is rather tacky, as they perform a poor Beach Boys imitation, but the last 30 seconds stand as the true antithesis of their band name.
Select Christmas-y lyrics:
“Hey, Mary-Kate, what are you getting Ashley for Christmas?
Um, I actually just got her a Bowflex.
Shut Up! I was gonna get her a Bowflex.”
Career marker: This song came just before the New Yorkers blew up with their sophomore album, Some Nights.

Why it’s awful: In no way should Kermit, diamond-encrusted mistletoe, and seafood ever go together. Cee Lo fits all three in this overstuffed, over-the-top single.
Select Christmas-y lyrics:
“Diamonds on my mistletoe,
But that can’t buy you love, no.”
Career marker: Despite the crimes against humanity committed on Cee Lo’s Christmas album, it hasn’t hurt his career … yet.

(Note: If you’re thinking to yourself that this just-released bit of John Travolta and Olivia Newton-John madness was jobbed, ON-J is ineligible per our rules. She’s a Christmas-album-releasing machine. Sorry, Greasers.)

Max Blau (@maxblau) is a staff writer at Creative Loafing and contributes to the Atlanta Journal-Constitution, NPR, and Paste Magazine.