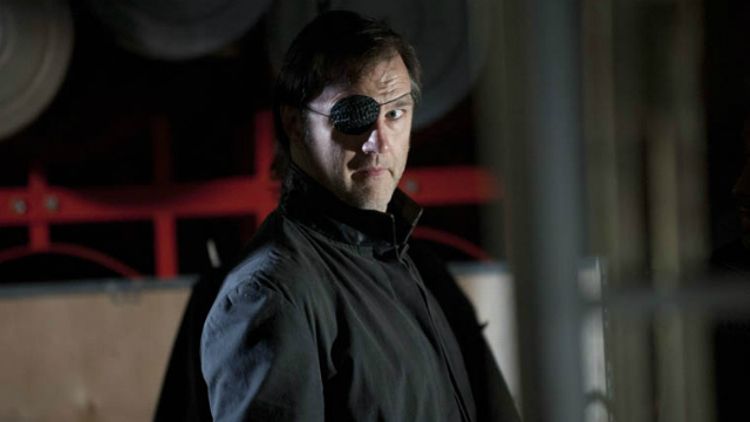 If, like me, you’ve watched your share of traffic-accident-bad Lifetime movies, then I bet you too have longed for a wandering zombie to spice up those hackneyed SWF plots and excessive use of Aaron Spelling children. Well, this week’s Walking Dead episode “Prey,” a.k.a. Mother, Why Did I Sleep With Danger?” was the answer to those childhood prayers. But be careful what you wish for because the TWD writing staff threw my last recap’s final words back at me. I asked for Andrea, and boy, I got her.

The show was pretty much All About Andrea, the show’s hardy ex-ACLU lawyer who gets as much love from Walking Dead fans as a real ACLU lawyer does at a Southern Sheriff’s conference. No character since Dale has seemed a choicer morsel of corpse kibble, with that golden hair the waxen color of zombie floss, and credulous eyes shooting skyward whenever a hunky psychopath tells her gullible is written in the clouds. It’s not just that her taste in men is worse than a small town beauty queen’s, from her suicide pact with Jenner in Season 1 to bedding Shane the instant he went Lord of the Flies to sticking it out with the world’s worst OkCupid match, the Governor. It’s that Andrea, in all her eye-rolling, zombie-filleting, needy-sarcasm glory, is the most frustrating character on TWD. She has such potential: She’s exactly the smug yuppie anyone would love to watch get fire-baptized by the Libertarian wet dream that is post-zombie Georgia. She’s become a card-carrying NRA member, made besties with everyone’s favorite katana artist, Michonne. And yet somehow, time after time, that exasperating eyebrow arch of hers makes me cringe.

“Prey” might mark a turning point, or at least an awareness by the staff that Andrea’s debilitating lack of all sense has been a drag on our ability to engage with her. For once this season, Andrea actually does something. It started with a nifty flashback opener, Andrea and Michonne bonding over an open fire, a warm tin of dog food cassoulet, and memories of pre-apocalypse California wine. Or rather, Andrea tried to bond by asking how Michonne picked up her pet zombies, while Danai Gurira gave her that patented “Just Shut Up” glare. Then, we flashed forward to the Governor going cuckoo in his backyard hobby torture shed. You see, this week El Guv went so full tilt that even Andrea and her partner in Cultish Co-dependency, Milton, had to face reality. (One of the episode’s subtler pleasures was watching David Morrissey have to deliver the Governor’s Kumbaya shtick while wearing his eye-patch and Nazi-surplus trench coat ensemble. Say what you will, Morrissey’s got the sartorial sense needed to haunt my nightmares.)

Anyway, the episode proper began with Andrea showing shock — utter shock! — when the Governor racks Woodbury’s collective shotgun in preparation for his next meeting with Rick. Then, Milton confronts him for a neighborly “whence torture” chat as El Guv polishes the pointy playtime toys he’s set aside for Michonne, including, but not limited to, a shiny new speculum: cervical cancer beware. Obviously, attempting to reason with someone while they sharpen a bone knife will fall short of even your lowest expectations, so Milton quickly high-tailed it to Andrea to let her know that not only was there no “deal on the table,” but that the Governor had also demanded Michonne as a condition for Rick and Co.’s non-liquidation. (I hope in the final two episodes, no one else acts like this is a believable offer worthy of plot-padding discussion. I’ve enjoyed Season 3’s adrenaline resurgence but that might tempt me to gouge my eyes out with a speculum.) To really drive the point home — because we all know Andrea’s a slow study when it comes to Psychosis 101 — Milton takes her to a hallway with an eagle-eye view of the Governor’s chamber of horrors just as he’s unpacking a new box of torture tools recently ordered from www.amazon.post.zombie. The infernal device that most interested me was the Governor’s throwback microcassette recorder. What fiendish horror lies there: Will he force Michonne to listen to him whistle the Friends theme?

Then, to my total surprise, for the first time this season, Andrea actually showed initiative and tried to shoot the Governor! It was a wonder to behold, almost as if a season’s worth of her credulity-stretching cluelessness had set this moment up. Alas, it passed far too quickly. Granted, it would be a buzz-kill to miss out on Rick and the Governor’s Battle Royale, whenever it’s coming, so Milton stayed Andrea’s gun at the last moment, as if to ceremonially take on the mantel of most-frustrating-character-in-the-show off her shoulders. Milton even used Andrea’s favorite pet name for Gov. Wack Job (Phillip) when she told him she was getting out of Dodge and he should, too. But the more he hurts you, the more you think you can save him, isn’t that right, Milton? To wit, Andrea left Milton behind with the kind of pained facial paralysis that only Tori Spelling has ever truly mastered.

However, coming upon Andrea huffing on her way, Martinez confiscated her gun with a smarmy smile, so Andrea made a beeline for the exit gate, where she ran into Tyreese and Sasha taking target practice on Woodbury’s back gate. At first, Tyreese’s good-natured diligence slowed her down: Andrea hadn’t fully thought out a clever ruse to slip away unnoticed. Fortunately, like any truly determined school truant, she just said to hell with it and jumped the fence, but not before telling Tyreese that El Guv was one Stepford wife shy of a full-on psycho harem. I guess it would’ve been a bit much to ask that she more clearly and concretely elucidate just why Tyreese should beware, but I admit, at this point, for the first time in a while, I started to actually empathize with Andrea. At long last, she was doing what 95 percent of the viewing audience has been screaming at her to do all season: RUN!

And, boy, did she run. This episode turned out to be a full-on tribute to Marathon Man. Andrea sprinted through the wilderness like a zombie-dodging pentathlete with the Governor hot on her tail (after he went Sonny Corleone on Milton, who admitted to his hair-braiding/moral-qualm-debating girl time with Andrea). The Governor quickly found her in a grass field, ramming his truck at her while all but screaming, “Baby, get back in the car” and finally cornered her in an abandoned warehouse. Next came the episode’s highlight: Andrea, caught inside between zombies and the Governor’s demonic whistling repertoire. Sadly, no Friends theme. While she scrambled for cover or an exit sign, he broke glass and tamped down zombie skulls with his shovel like so many mounds of espresso grinds: They are officially TV’s cutest post-apocalyptic dysfunctional couple. But seriously, this section displayed the guilty-pleasure tension of an early ’90s psychosexual thriller, complete with the requisite female empowerment when Andrea made clever use of a pocket of stairwell-bound zombies to swarm the Governor and make her cocky jog-away.

Back in Woodbury, Tyreese had started to see the Governor’s crazy eyes for himself when the Governor freaked that Andrea had fled. (I hope Tyreese’s wide-eyed wonder doesn’t become a recurring motif either. Chad Coleman’s a great actor, so I think we’ve hit his limit of exchanges like, Tyreese: “This isn’t a prison camp, is it? Governor: [sweaty, pale-faced as he fingers his Uzi]: “Why, no, my good sir!”) Quietly voicing concern to Martinez only earned the expected slapdown; but Tyreese’s suspicion did provoke a scuffle with Allen after a frankly perplexing fight about whatever happened with Allen and his wife before Tyreese’s group found Rick’s homey Supermax sublet. Honestly, it didn’t register no matter how much I rewound the DVR. When Martinez took Tyreese, Sasha, and Allen to round up walkers for some unspecified villainy, Tyreese objected, and Allen accused him of screwing the pooch regarding their relaxingly zombie-free food and shelter in Woodbury. By way of retort, Tyreese dangled Allen over Martinez’s pit of ravenous biters, which I took as a not-so-subtle foreshadowing — guess who’s future zombie chow. Later that night, a gloved figure came back to aforementioned hole and turned it into a good old-fashioned Texas pit Zombie BBQ with a match and some gasoline.

But the coup de grace of the episode was Andrea, within sight of Rick and the prison, being dragged back to hell by the Governor, who somehow survived her Zombie blitz — perhaps he bested them all in a one-eyed staring contest? He then quietly spirited her back into town (he didn’t even tell his trustworthy lap-thug Martinez that he’d found her), taking a beat just to investigate Tyreese about last night’s walker roast. Tyreese’s ignorance was all the Guv needed to know that Milton was, in fact, the fire-starting traitor. The maniacal uni-squint the Governor gave Milton, plus the ominous indie rock that ended the episode over a shot of Andrea gagged in the dentist’s chair, promise the potential for an incendiary finale. All told, an episode with real thrills, a certain quotient of Tyreese-expounding filler, and a diabolical ending. What will the Governor do to Andrea? Can his stainless steel toys repair the damage to their relationship his psychopathic ways have wrought? Will I now gasp in dismay for her instead of at her? Who knows, but fingers crossed that the show finally shifts into overdrive for the final episodes. As Andrea, for once, proved this week: The time for talk is over. Get ready to run.

The Kardashiad, Week 8: Like New York City, But More Dismal