The Kardashiad, Week 8: Like New York City, But More Dismal 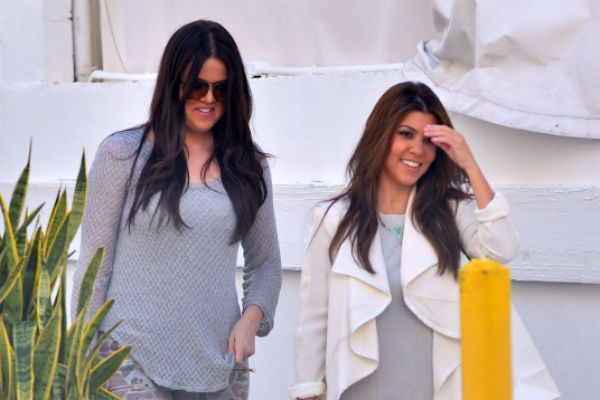 Kim comes home from vacationing in Italy with Kanye and tells Kourtney all about it. There’s a makeup artist working on Kourtney’s face. Said face displays a total lack of interest in what Kim is saying. Kim almost got kicked out of the Sistine Chapel because you’re not allowed to take pictures in there. And then afterward in Saint Peter’s Square, she and Kanye “did, like, a full photo shoot — we had our roses, and my new little bag, and we were, like, posing,” and it was all perfectly delightful and dreamy until “people started taking, like, phone pics.” The nerve of some people. Celebrities should be free to stage impromptu photo shoots in crowded public places full of camera-toting regular people without those regular people getting all up in the business they’re minding. I’m pretty sure the new Pope would agree with me on that one. Kim says a fan came up to her crying and saying something about how her sister was going through an awful divorce: “I was like, ‘Aren’t we all?'”

Khloe flies in from L.A. and shows up at the Kardansion, where Kourtney’s wearing an L.A. Clippers sweatshirt and reading What to Expect the First Year. It’s October and Khloe has been waiting a month to find out if she’s been hired as the new co-host of The X Factor, and she’s nervous. Kourtney tells Khloe, “God only gives you what you can handle,” which if you know that Khloe ended up getting the job, and then got fired in February, is pretty funny. Later that night in the kitchen, Khloe starts yelling at Kourtney’s assistant, Sheiva, about vaginas and reading aloud from the Internet about Ben Wa balls and a product called the Kegelmaster while Scott looks on in horror. Just some ladies having a totally spontaneous moment of bawdy fun that just happened by itself with no external impetus!

The next day, Scott and Kourtney take Mason to a playground that looks to have been cleared of all other children and parents by a Secret Service team. Scott tells Kourtney he doesn’t want to go to London with her for the U.K. launch of the Kardashian Collection; they argue. “I’ve seen London!” Scott says. “It looks like New York City, but more dismal!”

Khloe has obtained a pair of Ben Wa balls. “I just want to see if my [bleep] is tight, and this is the master test,” she says. One of the balls gets stuck inside her and Khloe and Kourtney do a bunch of silly hip-swiveling dance moves in the bathroom trying to get it to fall out.

Kris calls to tell Khloe she got the X Factor job; Khloe’s expression doesn’t change when she finds out. So either this is a re-shot reaction or this wasn’t exactly the news she was hoping for; I’m leaning toward the latter, because then we see her first day on the set and she’s kind of a line-flubbing disaster. On the way home, she begs her mom to “call Simon and get me out of this,” then says she’ll fake a heart attack to get out of doing the job. Kris tells her to stick with it, and we all well up with sympathy for Khloe’s plight as a soon-to-be-ex-TV-talent-show host like we’re supposed to. Most of the crew people on the X Factor set have blurred-out faces, which makes it seem like they’re up to no good.

Scott’s decided that while everybody’s out of town, he’s going to throw a “royal shindig” at which he and his closest brosephs will celebrate his having purchased a British lordship in England last July, so he and Sheiva and Dash manager Roya Bahrami drive to a costume shop and try on goofy British-person outfits. Sheiva asks if Scott’s planning to tell Kourtney about the party before or after it happens, and Scott says “before” in a way that suggests the answer is “after”; it’s a valiant attempt on this show’s part to make the party Scott’s about to throw seem like a crazy rebellious act, but the fact that he’s putting the party together with help from his wife’s assistant and business partner sort of de-rebelizes it.

Tragedy on The X Factor set: It’s 30 minutes to dress rehearsal, and Khloe’s makeup artist hasn’t shown up! But then (emotional roller coaster!) Kris Jenner sends over her own personal makeup artist and everything’s OK again, except that Khloe is still really bad at co-hosting The X Factor. She introduces Simon as “Mr. Sexy Simon Cowell.” Kourtney, at home in Miami on the couch with Kim, looks at the screen and says “You can see her nipple.” You totally can. Kim says, “Oh my gosh.” Simon makes a joke about it: “I think the air conditioning’s on high tonight.” Khloe says she didn’t understand this until the producer in her ear told her, “Your areolas are showing through your shirt.”

Scott kisses Kourtney goodbye as she leaves for the airport. Then he looks up at the house and says, “Looked at my kingdom, I was finally there.” I chuckled at this and my wife said “You just laughed at Scott Disick. You love him.” Delivery guys start showing up with Lordly accoutrements: suits of armor, lobsters for dinner, a throne. “I feel like Cinderfella,” Scott says, and I don’t laugh. A specially-flown-in English butler named Jack shows up with Scott’s special English lord-cape in a garment bag. Scott tells Jack that the party is “gonna be some royal shit” and you can tell that Jack’s marshaling every ounce of English-butler training he possesses in order to keep from rolling his eyes.

Meanwhile in the real England, Kim pulls up to the Dorchester Hotel and exits an SUV wearing Terminator X shades. Upstairs, she makes fun of Kourtney’s suitcases. “Who literally travels with luggage without rollers? Like, what century are you in?” Then she critiques the way Kourtney’s packed Penelope’s clothes bag, which furthers a subplot in this episode involving Kim and Kourtney being super-competitive about meaningless things. I haven’t bothered to write about this subplot — it’s late — but you should probably know it’s there.

Kim and Kourtney get their makeup done; Kim talks to Khloe on her gold cell phone. “It’s fab,” she says of England. “The paparazzi are nutty here.” Then we hear her say, “I saw your nip slip on TV. Did you do that on purpose?” The makeup artist’s hand is in front of her face when this happens and it’s pretty obvious the line was added in post, presumably to mollify the legions of nipple-truthers out there who believed the exposure was deliberate. Then Khloe changes the subject and starts talking about how drinking pineapple juice can make your vagina taste better. Kim and Kourtney argue about who has the more pleasingly flavored lady-area. There is talk of a “vagina smell-off.” Kim looks in the talking-head camera and says, “Kourtney is very competitive about her vagina.”

It sure seems like a lot of vagina-talk for one episode (and for this blog), and then there’s a commercial break and everything starts to make sense: This week’s Kourtney & Kim Take Miami is brought to you by U by Kotex tampons and their Generation Know campaign, which purports to be all about empowering young women by encouraging them to talk frankly about periods and vaginas and thereby dissolve the myths about such things being weird and gross. So all the vagina-vagina-vagina talk in this episode isn’t just Khloe being outrageous — it’s product integration. I know this show doesn’t really have any principles to compromise, and that’s what I love about it, but damn, son. How teaching young women to be self-conscious about vaginal flavorfulness in any way constitutes “empowerment” is probably beyond the scope of this recap; instead, let’s pause to marvel once again at what a shameless, ruthless genius Kris Jenner is, while listening to a really bad Rick Ross song about the pineapple trick:

Maybe Rozay, Drake, and Wale are in the pocket of Big Tampon, too? Anyway, Kim and Kourtney keep ordering and drinking pineapple juice in weird promotional-appearance contexts, like in what seems to be a joint interview involving the two of them, High Street fashion-chain magnate Sir Philip Green, and a business reporter from the Daily Mail. Kim tells the Daily Mail guy she enjoys their crime-scene photos. Kim, Kourtney, and Khloe (who’s flown in from L.A. just for the day) do their meet-and-greet at a mall in front of a legitimately gigantic crowd of legitimately screaming fans. “This is where I’m comfortable at,” Khloe says. “It just seems so much easier, and there’s so much less pressure.”

The Miami house is all done up in schlocky-British style for Scott’s lordship party. There’s a midget walking around in a court jester’s costume. Jack the Butler encourages everyone to gather in the driveway to await Lord Disick’s arrival and (he says, dripping contempt), “See him in his wonderful carriage.” Jack wants to kill Scott so bad. Jack wants to kill Scott the way Anthony Hopkins wanted Emma Thompson in Remains of the Day. Jack is hands down the best new character of the season, displacing Chapman Ducote, who’s at this party, wearing a tuxedo, because of course he is. Scott pulls up in his Rolls-Royce.

At dinner, Scott says to Jack, “Feed the Lord!” Jack says, “Yes, my lord,” with slightly-less-veiled loathing, but then some comic genius at the table says, “You want Jack to put his meat in your mouth?” and there’s a silence — as if Scott were an actual lord who could potentially have the person who said this beheaded — and then Scott laughs and everyone joins in because it’s a hilarious joke. Scott gets wasted, breaks some plates, probably fucks the jester before it’s all over.

In England, Khloe tells Kim she looks pretty, except instead of saying, “You look very nice today,” she says, “Kim, you’re so gorgina that sometimes I just want to stick my [bleep] in your mouth.” On that note, the vagina test begins. Kim and Kourtney each take cloth hotel napkins into the bathroom and, like, swab themselves, I guess? I kind of can’t believe any of this is happening on basic cable. Khloe makes a joke about not wanting to smell Kanye’s [bleep] but ends up saying that Kim’s [bleep] smells the best. Kourtney’s lacy blouse-collar in this scene is very Ruth Bader Ginsburg.

Scott walks the halls of the empty Miami house and ends up in Mason’s room, talking to a stuffed dog. The way the camera follows him in these shots reminds me a little of Gus Van Sant’s Last Days, but I’m going to go ahead and assume the homage is unintentional.

Khloe doesn’t want to leave London and go back to L.A. because it’ll mean she has to go and do The X Factor again. There’s a knock at the door; it’s Scott, because being a rich reality-TV person means never having to be alone with your demons for long. Scott, Kourtney, and Mason put on crowns and go visit the London Eye. Khloe does end up going home, and a bunch of Kardashian kin (and Kanye!) show up to visit her before her second X Factor show. She says, “I’m excited to be amazing.” For at least a little while, no one talks about anyone’s vagina.

Next week: Kim lands on a worst-dressed list and worries that her poor fashion choices are ruining Kanye’s reputation, which sounds like exactly the kind of thing Kanye would say to his girlfriend in total seriousness; Scott goes somewhere and sees a cow.