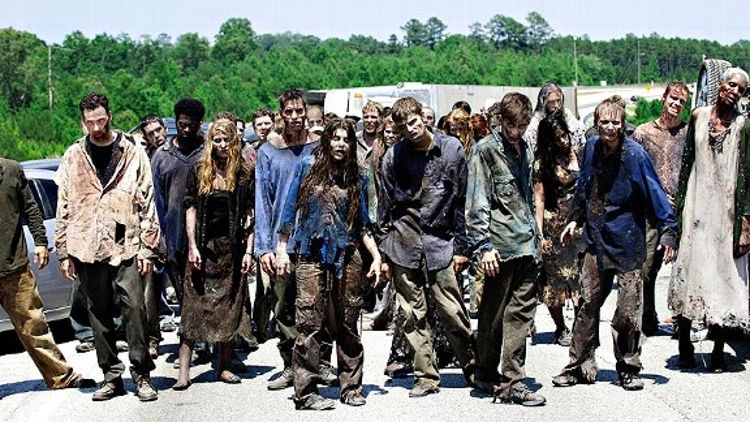 In the fiery finale to the truncated first season of The Walking Dead, our refugees were given a brief lesson in zombie pathology from their wine-drunk host at the CDC, Dr. Desmond Hume Dr. Edwin Jenner. Using an animated X-ray as a visual aid, Jenner highlighted the twinkly blue bursts of synaptic energy that make us “who we are.” He then demonstrated how the zombie virus snuffs out the blue light — with its hopes, dreams, fears, and desire to eat food other than entrails — and, eventually, replaces it with a dull, animalistic red glow. That brutish ruby pulse in the brain stem is what separates the “walkers” from the perspirers, runners and chicken-fried monologists who make up the main cast. It’s also what separates the best bits of The Walking Dead from the worst and the show itself from anything else on television. When the red light goes on, The Walking Dead is a crossbow bolt of adreneline right to the skull, a gloriously gory exercise in guilt-free genre indulgence. But it’s when the show attempts to traverse the quieter, more recognizable neural pathways of adult emotions that it gets bogged down. For its first six hours, The Walking Dead was much better at revealing actual human hearts — to be snacked on by jaw-free ghouls, natch — than saying anything insightful about them and how they work.

Expectations for Season Two were also tempered by a behind the scenes explosion larger — and a lot more believable — than the fireball that incinerated Jenner (and all his innocent cases of Cabernet Franc) last season: just days after addressing a ravenous crowd of geeks (the living kind) at Comic-Con, showrunner Frank Darabont was removed under mysterious circumstances. It was hard to predict what sort of effect this removal of the head might have on a massively-successful show already lurching into production (the first episodes with Glen Mazzara as sole showrunner won’t arrive for another few weeks) and, after last night’s extended-length premiere, it’s still not entirely clear. For approximately 75 of “What Lies Ahead”’s 90 minutes, the old problems were still in evidence. But before we address those, let’s talk about the other 15 minutes, shall we?

Because, I think I speak for America when I say: HOLY BALLS. The set piece on the highway — where our heroes, trapped in abandoned-car gridlock, must tread silent water in the midst of a tidal wave of relentlessly stumbling zombies — was as gripping and, in its own gruesome way, lyrical, as anything you’ll see this year. The Walking Dead learned early that the only thing more horrific than shooting out the diseased, rancid brain of a “walker” is not shooting in the first place. And so Rick’s helpless terror as he watched from under a car as a hundred pairs of moldy slippers pass within biting distance of his friends and loved ones was palpable. Better, the image of Andrea cluelessly cleaning her pistol while a a slow-moving herd shuffled past the camper window was more viscerally disturbing than the later sight of Andrea putting a flathead screwdriver through the dusty skull of a handsy baddie — although that was pretty goddamn unsettling too.

It’s ironic, then, but perhaps predictable that the greatness of The Walking Dead’s zombie scenes only serves to underscore the weakness of its humanity. Because as soon as our gang was done dry-heaving into the pavement and hiding under rotting corpses, it was back to the show’s default setting: awkward exposition and smoldering, sweaty looks between people we’re still not sure we care about. While poor irrelevant T-Bone T-Dawg — who was about twenty seconds (and twenty feet) away from becoming steak tartare — gets his gushing arterial wound sewn up off-screen, Andrea helpfully mentions that she’s “still freaked out from that herd that passed us by.” Really, Andrea? Ya think? (Also: did the producers think we’d forget about the time she went deep-cerebellum fishing with a rusty handtool not four minutes previously? We’re good! We remember! It’s the other, less important things we have trouble holding on to, like any character’s name that isn’t “Rick” or “Carl.”) Then, at a slower pace than an armless walker trying to download a George Romero movie on dial-up, Rick and the boys splash around in the woods trying to find the missing Sophia.

There is an extended gross-out sequence of Rick and Darryl — who I already like a lot more this season in comparison to last year’s raging redneck routine and, prior to that, his work as a founding member of Kings of Leon — performing exploratory stomach surgery on a dead zombie. (Would have loved to have been in the production meeting for that one. “Lynn, can you work up some regurgitated woodchuck meat for Tuesday? Also, Dale needs a new hat.”) There are mysterious church bells. And, worst of all, there is another Pained Rick Monologue, this one delivered, no joke, to a wooden statue of Christ that actually shows more range and dynamism than our wild-eyed lead.

But then, at episode’s end, we get a second strangely beautiful digression, the sort that will keep those who prefer their brains behind the scenes instead of on a plate tuning in for another week: a muted male summit between Rick, the best friend who cuckolded him, and the boy they both feel fatherly feelings towards. In the woods the trio see a beautiful buck, a literally cuckolded creature, and encourage young Carl to approach it. For his attempt to reconnect with the natural world, Carl then receives a bullet in the gut. (Note: growing up, this is exactly what I thought would happen to me if I ever played outside. Now I write about television for a living but remain proudly bullet-free.) This was legitmately shocking and cruel. For much of the The Walking Dead’s run I’ve been half-hoping to see Carl’s wheedling face used as an amuse-bouche for a starving walker — but to see him shot for (accidental) sport? Unlike 90% of the extras on this show, I’m not a monster.

Seven Important Facts About Coldplay and Rihanna's "Princess of China"