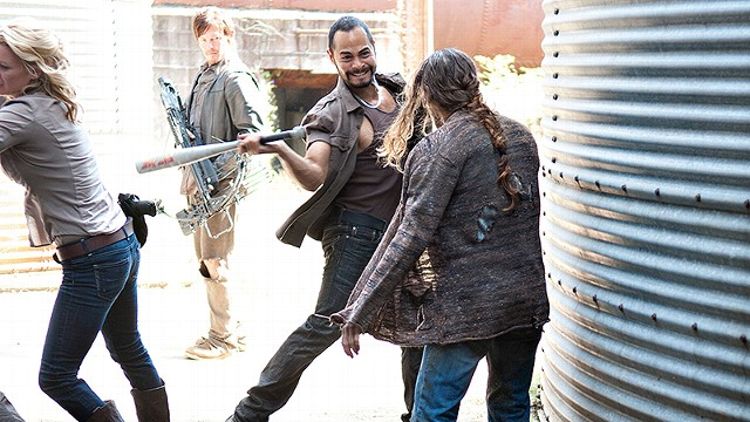 Preamble in Which I Beg for Mercy:

Before I begin this week’s recap, pardon me, merciful readers, if I flash my TWD creds in the hope that slathering myself with zombie bona fides will let me pass (relatively) unscathed through the hordes of Walking Dead fanatics and Grantland commentators. Yes, I have seen the show, all of it. In fact, I just spent the better part of a road trip with my girlfriend binge-viewing Season 3, the upshot of which is we both agree she would survive the zombie apocalypse and I wouldn’t, based solely on my need for copious pee-breaks and her steadfast refusal to allow them. Further, I share everyone’s agonized memories of the mind-numbing yoga betrayal retreat that was Season 2, as well as despair at Season 1, Ep. 4, “Lowrider Rest Home Cholos.”

So, I’ve watched the show since it was the little phenomenon that could and Daryl accessorized solely with Squirrelly Couture. And while it might not always drive me to the same dramaturgical despair as Andy Greenwald — I think Season 3 has, overall, shown geometric improvement — I retain both a healthy dose of skepticism and an appreciation for a re-animated corpse creatively de-animated. For me, The Walking Dead is most like that smoking-hot-if-slightly-dim cheerleader/quarterback you can’t help fantasizing about even though he/she thinks Africa is a country.

So, to this week’s episode, a.k.a. the Camp Zombie Accords, wherein Rick and the Governor try to resolve their differences with all the sincerity of the Middle East peace process. But first, permit me a last detour to memorialize Ep. 12, “Clear,” which downshifted the plot progression without getting caught in the series’ usual mud trap of subtext-free emoting. Usually, the chattier Rick Grimes and his Traveling Ax Circus get, the more I root for an errant zombie to sneak up and sate itself. Seriously, at this point, those herds have to have picked America cleaner than a charity turkey at a homeless shelter. They’re starving, but no match even for Cowboy Carl these days. There, I would argue, is real stakes. Nonetheless, last week’s return of crazy Uncle Morgan and his lethal bag of Acme-brand practical jokes marked a series high. (Plus, a swinging, trip-wire ax to boot! Somewhere up there, Chuck Jones is smiling.) Even Carl’s “I’m a big boy now” young adult adventure was kept on the rails under the watchful glare of Michonne’s katana. So, overall, a pleasant respite that also served necessary story ends, e.g., arming Rick and the others for the much-awaited rumble in the concrete jungle.

This week, well, we’re still waiting. The episode started promisingly as Rick, Daryl, and Hershel, all decked out Hamas-style, sped up to an artfully rusted abandoned silo for a tête-à-tête with Eye-Patch-Model-of-the-Month, the Governor. (I must say Hershel wields that M-16 like a true Syrian freedom fighter; will he treat us to another Tony Montana moment soon? I hope so.) But then, I got a sinking feeling and sure enough, this Post-Apocalyptic Potsdam Summit’s UN sponsor showed up: Andrea, all huffy because the Guv got there early. First, the histrionics were yet another unnecessary drag on Andrea’s character, one that’s been the series’ resident fan-piñata for far too long. It only served to highlight a dubious situation, which even party mouthpiece The Talking Dead pointed out afterward: Why would the Governor go ahead of time without any backup for no other reason than to menacingly emerge from the shadows; and why didn’t Rick take a potshot at him right then and there? Rick’s so hardened now, he’s leaving hitchhikers behind as Purina Zombie Chow, then stealing their sleeping bags on the way back, but he’ll hear out Cyclops the Psychopath? Later, when the show cut back to the prison where Merle agitated for a preemptive assassin raid on the Governor, I started to view him with a new half-redeemed warmth. Granted, that may have been the point.

But back to Andrea’s conjugal spat with the Guv. Yes, it helps set up her eventual Bridge on the River Kwai-What-Have-I-Done moment, but with a lack of grace that makes her come across as a garden variety Stockholm-syndrome girlfriend who pleads, “He says he’s getting sober, and he really means it this time.” Like I said: Hot cheerleader. Africa. Country. Her character deserves better. When the Governor tells her to step outside, I should balk at his smug chauvinism, not secretly think, “Thank God,” and then question how evolved of a 21st-century male I am.

Nonetheless, things picked up again when Rick and the Governor finally sat down for their 15-minute speed date. First came the opening serves: Rick fired off a sober, rational, and adorably naïve Two-State Solution, which was summarily refuted by the Governor’s counter of unconditional surrender. Next came a nice volley of ritual dog-sniffing and emotional barbs. Rick scored the first break point with one of the series’ best lines to date: “You’re the town drunk who knocked over my fence and ripped up my yard.” Ace! Next, the Governor shot the fish in Rick’s emotional barrel by backhanding him with Lori’s infidelity and his baby daughter’s questionable paternity. Still “game point Grimes,” in my opinion. But then, like all the best union negotiators, the Governor poured two fingers of bourbon and got down to business. He tempered his initial insanely unappetizing offer with an escape clause: Hand over Michonne in two days, and I’ll leave you be to enjoy your little episode of Extreme Makeover: Prison Edition. Never underestimate a man who hefts a bottle of small-batch and two clean tumblers into the middle of a zombie-infested wasteland!

Meanwhile, outside, the respective henchmen held their own version of High Tea: zombie splattering. Milton tried to get the ball rolling by sharing some post-zombie free verse he’d jotted down in his moleskin. (The notebook of zombie Hemingway!) He managed to earn at least Hershel’s approval, but it was Andrea who really galvanized the two camps by knifing an errant walker with an aggression-venting blade toss. Then it was off to the races for Daryl and Martinez, the Governor’s new Merle 2.0. Martinez waded right in with some rotted-skull tee ball, showcasing the kind of clean, gorgeous swing the Dodgers could really use in their lineup. The heroic sound editors even spotted him that lovely, clear, bell-like ring that only an aluminum bat can give you.

Daryl stuck with his crossbow, and soon the two took a hard-earned smoke break to share the knowing wisdom of underlings who understand their boss’s emotional shortcomings all too well. I believe in the carrot, as well as the stick, so let me just say, nice little moment, TWD writing staff! Two supporting characters gave the show a needed dose of refreshing humanity by illustrating what the principals don’t seem to get: The zombie apocalypse has become just another day at the office by now. No need to yell all the time. It’s OK. Have a smoke. Pop a cold one. Bitch about the fact that two fragile dick-swinging egos are about to force you at each other’s throats for no good reason when you should be focused on the not-unpleasant task of repopulating the earth.

Still, yelling there was back at the prison, as well as earth-repopulating. Merle argued persuasively for a preemptive strike against the Governor. But rather than respectfully disagree (or just pull a gun), Glenn flew into a ’roid rage and tackled Merle to the ground. (Of course, Merle pointing out to Glenn the Governor’s touchy-feely time with Maggie didn’t help. Someone needs to replace his Bible-study reading list with one on the art of rhetoric.) Next, Merle pleaded with Michonne to hear him out. You could see the artfully conveyed empathy in Danai Gurira’s eyes as she pointed out the problem with Merle’s rational realpolitik: He never pulls it off without a hefty body count of his own. Glenn later blew off his Merle-provoked steam via a healthy bout of makeup sex with Maggie. This is another conflict I still haven’t gotten, no matter how many times fan friends point it out to me. Of all the things that Glenn’s been through, the Governor copping a feel on his girlfriend pushes him over the edge and into uncharacteristic dickish-ness toward Maggie? Whatever makes for steamy, Showtime-esque sex-scenes, I guess.

In the end, the summit adjourned and Rick returned to give the requisite Braveheart speech about defending their new early-Brutalist-architecture home because the Guv will be coming guns-a-blazin — all without mentioning the Michonne offer. Back in town, Andrea also started to show the signs of awakening from her psychological torpor with respect to the Governor. Taken together, they were two refreshingly plausible reactions to the day’s events, even if Rick’s hand-wringing to Hershel about whether he really could trade Michonne for obviously fake peace left a slightly aspartamic aftertaste. However, the wagon-circling best be at an end; and I took heart that the teaser for next week shows lots of flames, Laurence Olivier’s maniacal dentist chair from Marathon Man, and yes, even Andrea. It promises the payoff to the kind of satisfying momentum that the late-lamented Glen Mazzara regime started the season with, before whatever misguided AMC machinations cut him out like just another hand, eye, leg, or appendage that I suppose you can live without but really shouldn’t have to.