The ‘Under the Skin’ Trailer, SodaStream, and Scarlett Johansson’s Next Chapter 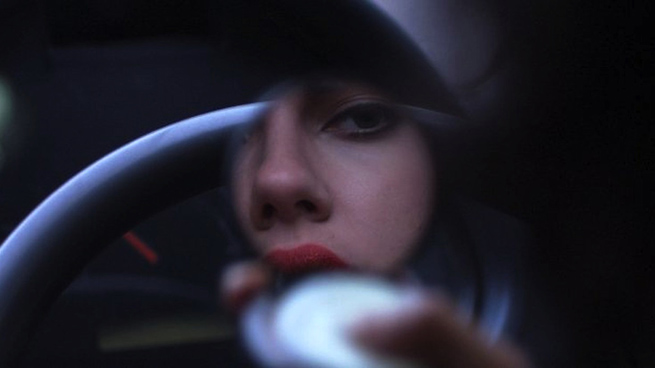 If you saw Her and thought the idea of Scarlett Johansson as a nonhuman entity expertly evolved to deliver emotional/sexual gratification to lonely men while not actually being able to empathize with them in a biological way was interesting, but could do with fewer pastels, well, have we got the film for you! Under the Skin, the latest film from Sexy Beast (and Birth, but nobody seems to want to acknowledge the existence of Birth these days) director Jonathan Glazer, will finally make its theatrical debut this April, and it has a new teaser trailer to get you properly psyched/creeped.

The film, which debuted to glowing reviews at the Telluride Film Festival last year, follows Laura (Johansson), an extraterrestrial disguised as a hot femme fatale, who takes a road trip across rural Scotland, “preying” along the way on hitchhikers. It was based on the Michel Faber novel of the same name; who knows what artistic liberties Glazer takes with the source material, but (SPOILER ALERT?) in the book, the alien “drugs them and delivers them to her compatriots, who mutilate and fatten her victims so that they can be turned into meat — human flesh is a delicacy on the aliens’ barren homeworld.” Oh. OK. That sounds great. See you on April 4, movie.

The past year has been a bit of a transitional period for ScarJo; in between Avengers movies, she’s been laying some groundwork for a boundary-pushing, intriguingly self-aware new chapter of her career. Though she was not the original voice for Samantha in Her, Spike Jonze’s eventual choice to use her seemed like meta-commentary on who Johansson has become as a cinematic symbol. Her willingness to do a film like Under the Skin, which appears to take advantage of her universally agreed-upon physical attractiveness and use it in a dreamlike, psychohorror context, is an exciting move. As ingenue-to-serious-actress transformations go, this looks like it could be an artistically rewarding one. We might not even feel like it’s appropriate to call her ScarJo anymore.

And then she did a damn SodaStream commercial.

SodaStream is a device that turns regular tap water into soda water, to which you can then add flavor “caps” for what is purportedly a more healthy, natural, carbonated beverage experience. It retails for around $80 at Target, and some people swear by it. It also has factories in the West Bank, a hotly contested region claimed by Israel from Palestine in 1967 during the Six-Day War. Basically, any business that sets up shop in the West Bank is bound to be plagued with controversy, and SodaStream is no exception. The endorsement led to Johansson’s resignation as global ambassador for Oxfam, a position she’s held since 2007. The ad, which was intended for the Super Bowl, was dropped from the broadcast — not because of the human rights issues, or the kind of steaminess one would expect from a Scarlett Johansson Super Bowl commercial, but because of a conflict of interest with Big Soda.

It’s a weirdly unflattering controversy for Johansson to get herself entangled in — and, unless she makes a public statement about her political stance on Israel-Palestine, one it looks like she just sort of wandered into without realizing the implications. And to top it off, the SodaStream ad is (ironically) flat — it would have easily been out-steamed by whatever visual atrocity Carl’s Jr. is planning on unleashing this Sunday. (The word “Uncensored” in the title of the YouTube clip is certainly helping it rack up those viral clicks, though, even though Johansson shows barely more skin than she does in Her.) It’s one step forward, one step back these days for Scarlett, but the promise of projects like Under the Skin make one hope she’s able to reclaim a little control over her image once the bubbles clear.

This article has been edited to reflect the fact that Johansson resigned from her position at Oxfam.

A Look Inside Stanley Kubrick's Annotated Copy of 'The Shining'

'A Million Ways to Die in the West' Trailer: Seth's Baaack