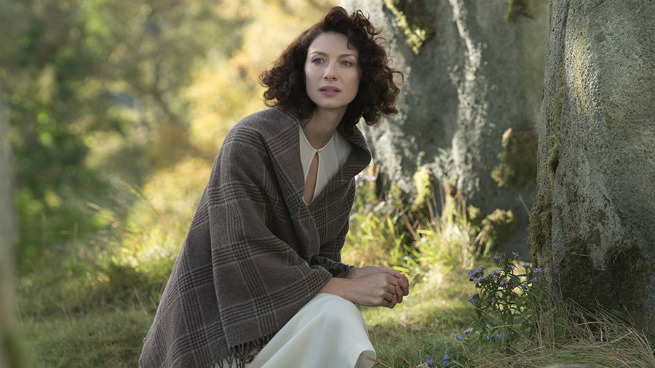 When my editors asked me if I wanted to review the new Starz original series Outlander, I quickly said “no thanks.” I was sure I would hate it, since the key art outwardly resembled Game of Thrones, a show I don’t really enjoy due to a personal prejudice against medieval fantasy and an irrational distaste for CGI dragons. I was so sure that I wouldn’t like Outlander that I was afraid to even watch it. But if there’s one thing I like more than arguing a firmly held opinion based on nothing, it’s being proven wrong! (Please pleasantly surprise me, Interstellar!) Maybe it was because I’ve been listening to a ton of Stevie Nicks lately, but I was in exactly the right headspace for Outlander‘s naturalistic Druidic romance novel sci-fi fantasy genre mash. It also turns out Outlander isn’t actually medieval fantasy at all. Rather, it belongs to the same genre as Back to the Future; historical fiction that’s also a time-travel romance, wherein the protagonist must avoid a series of Biffs.

It was exactly like earlier this year when I was dragged kicking and screaming to see a stage version of Noel Coward’s Brief Encounter, complaining all the way there in advance, and as soon as the play started I was rapt and enchanted. I am an idiot, and Outlander is great. The first half of Outlander‘s pilot is actually quite a bit like Brief Encounter. Claire Randall is a nurse in 1945, trying to reconnect with her husband, Frank, who has just returned from World War II. Claire and Frank’s relationship is quite intimate and loving, fueled by an intense sexual chemistry, of which we see several very vibrant displays. For their “second honeymoon,” they decamp to Inverness, Scotland, where they rediscover each other and also some witches (yes, witches). The second half of Outlander, wherein Claire is transported to 1743 Scotland, is kicked off after Claire and Frank check out an ancient pagan Samhain celebration rite at the local standing stones.

What makes Outlander work is how it plays its ridiculous setup completely straight — which isn’t to say that it’s humorless; it’s very witty. As played by former Irish model Caitriona Balfe, Claire is capable, sensual, and smart, not a mere Mary Sue (or Bella Swan). The primary love triangle is between Claire, Frank (who has a Wizard of Oz–like alter-ego in 1743 Scotland as well), and a really hot Scottish guy named Jamie. Frank isn’t just a Ralph Bellamy who exists to be dispatched with; there are some actual stakes in Claire’s choice about whether to stray, even after her time jump. Claire’s skills as a nurse immediately make her an asset to the Scottish soldiers she is stuck with in 1743, saving her from being raped or killed, and giving her a way to participate in the bloody action. If this all sounds too goofy to bear, it somehow isn’t, which is a testament to writer-producer Ronald D. Moore, a Star Trek veteran who made his name on Battlestar Galactica.

True Blood was the most recent show to attempt bringing fantasy romance novels into the elevated pulp-genre fold where shows like Breaking Bad (Western), Mad Men (soap opera), and Game of Thrones (hard fantasy) now dwell. While True Blood eventually drove itself over the edge, it started out strong. Its main conceit, of average babe Sookie being lusted after by a million hot men (who are also wolves and vampires) because of some mysterious quality (spoiler: fairy blood) is silly, but so are a lot of other shows that get taken more seriously. If Nic Pizzolatto’s supernatural Western True Detective can be taken seriously, surely we can give just as much credit to Outlander‘s successful take on historical romance. Romance is made primarily by, for, and about women, so if it has a reputation as a “lesser” genre, that’s not a coincidence. But Outlander has much more in common with its name-alike Highlander than with any sort of Fabio-covered bodice-ripper (though there’s some bodice ripping, too). It was so refreshing to watch a show that caters to women’s sexual fantasies, it made me realize how much I take it for granted that most shows will automatically cater to men’s. (Why not both?) It’s the same feeling I get watching Orange Is the New Black, another show that isn’t very concerned with the desires of straight men, assuming that the smart ones will be able to cross-identify with women. Outlander is proof that the long-standing desire for shows about intelligent female characters with complex inner lives is no longer just a fantasy.

Blockbuster Talk: Two Dance Movie Maniacs Put 'Step Up All In' Through Its Paces