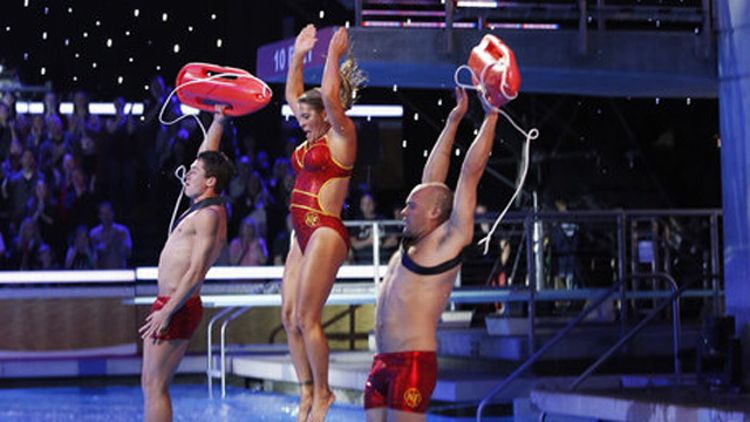 “Absence makes the heart grow fonder” is a phrase. While often used to describe the passion that lovers experience when forced apart for a long time, it also succinctly illustrates my relationship with the no. 1 verified-Twitter-account-user diving competition on television, Splash.

I went strong for the first three episodes, with thorough recaps complete with commentary, speculative drug-use accusations, and GIFs, but then I hit a wall. I couldn’t do it anymore. Each Tuesday evening, I thought about turning it on and writing about it for the next day, but for four straight weeks (Episodes 4-7), I couldn’t get myself to do it.

But now we’re here. The final episode. And while ridiculous, it’s time to give this show a proper sendoff.

The last thing I saw, from Episode 3:

Kendra Wilkinson had forfeited, which meant Louie Anderson and Kareem Abdul-Jabbar wouldn’t have a dive-off against one another, and thus both were staying for the next episode. So turning on the finale four weeks later, I had no idea who was still in play.

Before getting into the finale, one last look back at the initial predictions for the show:

After the techno opening sequence that I’d forgotten put me in such a miserable mood, we see our three finalists:

They’re important for about two seconds, because soon after we get the real star of the show.

I genuinely missed you, Joey.

Also, just so we don’t lose track, here’s the first (of many, presumably) insanely hyperbolic Charissa Thompson quotes from this episode:

“They are going toe-to-toe to find out who is the greatest celebrity diver of all time.”

I mean, I guess? Maybe? Anyway, not important, because after this statement, we see all the losers:

It’s unclear why they’re not wearing jeans and cardigans. Unless they’re doing one final dive, which I promise I will fast-forward through.

First up, Nicole. Last week, she seemed to own a complicated dive, which shows how far she’s come since last I watched this show.

Before her dive, she has a chat with Charissa, who acknowledges that she’s the only “chick” left in the competition. Ndamukong, how does that make you feel?

After more chick talk, the dive.

That was incredible. She’s really good. She might just win.

At this point, we learn that the judges will be grading the first dives and the top two averaged scores will advance. At that point, there will be a final dive-off and the audience will decide the winner.

Before going on to the next diver, here are the greatest three seconds ever recorded:

Yes, Kareem just did a sky hook while jumping into a pool while a song titled “Skyhook” played in the background. Yes, that just happened.

LOOK AT HOW HAPPY HE IS.

Insanely hyperbolic quote no. 2 from Charissa:

“This is arguably the most unbelievable diving event of all time.”

I’m going to go ahead and say that’s just false.

Next up: Rory Bushfield.

His head is wrapped up because he ruptured his ear drum a few weeks prior, and apparently water rushing into a hole in your eardrum is painful. To some.

After shooing away Joey, it’s time.

If he doesn’t win, this competition is rigged. Based on his judge scores, however, it looks like he’s well on his way:

To put the complexity of that dive in perspective, leave it to my archnemesis, Judge David, to spell it out in the worst way possible:

“If you added a half twist, and then half of a dive, that’s one of the hardest dives done in the world. That’s the dive that I won GOLD with.”

Meet me in the club, Judge David. It’s goin’ down.

Before our final diver, we get another intermission dive from one of our losers.

Yep, that pretty much sums up his competition. He doesn’t even get in the water.

But enough of him. Last person: Drake Bell. His backstory is that he got a concussion from this dive, which looks like the greatest flop of our time:

Though shaken up, he’s ready to prove himself. Once Joey is, again, shooed away, it’s time for Drake to make it happen:

Before we get the results that say Drake has been eliminated, we have another interlude, this time from Katherine Webb:

She’s the best. As for Drizzy:

Sorry, man. It’s been real. Even though quitting the HGH probably knocked you out the contest, it was the right thing to do.

FINAL ROUND. NICOLE VS. RORY.

But before that, this happened:

Yes, wouldn’t you know it. A SportsCenter-style “Top 10 Flops From Splash,” thrown into the episode. Oh, parent companies … [Disclosure: Grantland and ESPN and ABC are owned by Disney. Hi.]

Anyway, once that’s over, along with a very long, inspiring segment about Nicole, it’s time for her final dive. She knows she has to go big, because coming up after her is Mr. Tony Hawk Pro Skater 2 SSX Felix Baumgartner himself, Rory Bushfield.

She hurts her back and needs assistance in the pool. This isn’t good. Splash is easily the most dangerous reality show. Concussions, ruptured eardrums, injured heels, hurt backs — this is not for those who enjoy walking normally the next day.

Thankfully, she’s able to walk it off. Quick question, though:

Hey, Keshia, glad you’re concerned enough to walk your pink-robed self over to the scene, but WHAT ON EARTH ARE YOU REALLY GOING TO DO TO HELP?

Oh yeah. Screen time. I get it. Never mind. Do your thing, girl.

Finally, the final dive of the season, courtesy of Rory Bushfield.

It’s over. We have ourselves a winner, Joey.

Overplayed Song of the Week: Icona Pop ft. Charli XCX, 'I Love It'