The Short Life, Weird Death, and Mild Rebirth of the Witch House Genre 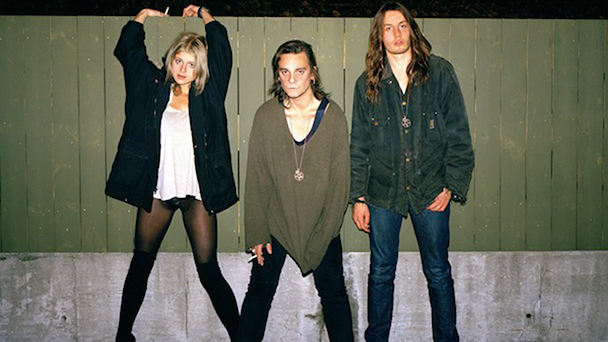 The last time I saw the name Jack Donoghue was probably in the liner notes for Kanye West’s Yeezus. He was listed as one of six additional producers on the goth stadium anthem “Black Skinhead.” Before then, I knew Donoghue for two things: He’d recently been spending a lot of time with Courtney Love, and he was one-third of Salem, a Michigan group that made dark, narcotically heavy music that sounded like dragging yourself up the wooden staircase of a dungeon after being dosed with two bottles of cough syrup by a serial killer.

Salem was a lot of things, but it was mostly known as an unwilling parent of the witch house genre, which ended up acting as a reaction to chillwave and lasting just about as long. Only, while the earlier, somewhat-made-up genre romanticized bong rips on the beach and, like, sun glinting off Marvel Superheroes Series 3 hologram trading cards, witch house was ostensibly about exploring the beauty in darkness. It was largely electronic, drawing from shoegaze and ambient and the slow-and-low remixes of DJ Screw. At its best, it was blown out and textured; at its worst, it was just a decent enough concept to work off of — all surface, with one idea dragged across multiple songs.

Though Salem produced the most well-known artists to emerge from the genre that no one wanted to be associated with, the history of witch house is a bit murkier. Denver-based Travis Egedy, who records as Pictureplane, likely came up with the name because he was half-seriously looking for a way to describe the dark dance music he was interested in. I guess calling it “You know that scene in Blade in which all the vampires are dancing in a club as blood rains down from the ceiling? Sometimes it sounds like that looked, but slower” was a little too unwieldy.

Witch house’s other issue was that it was problematic. In the nascent days of the genre that barely made it beyond its nascent days, a few other names were being thrown around. How were we supposed to describe music made for taking drugs that largely seemed to also be about taking drugs? Drag — named for the way the songs were often snail-slow — was an option and even briefly became a subgenre itself, but then something really bad happened.

DJ/Production duo Lauren Flax and Lauren Dillard, who recorded as Creep, had been casually lumped in with witch house while sounding absolutely nothing like how people understood the genre. (I’m convinced Creep delayed the release of its debut album for four years to escape the classification.) The group described themselves as “rape gaze” on its Myspace page. Needless to say, this didn’t go over so well.

In 2010, Zach Baron interviewed Flax about the term for the Village Voice. She explained that it started as a joke, and as often happens to bad jokes, was taken out of context and ballooned into a whole thing very quickly. Later, a quote from Flax was appended to the bottom of the article: “I just wanted to add something. I definitely didn’t express enough that we do not take the term ‘rape’ lightly and would never want to advocate sexual violence against any human being. It was a play on words which we never expected to be used as an actual genre. If there is anyone out there we may have offended, we sincerely apologize.”

Depending on where you were standing, this either marked the beginning of the end for witch house — though not necessarily the artists involved — or drove the nail into the coffin of a genre that wasn’t ever real in the first place.

In some ways, it was the perfect “scandal” for witch house; after all, this was a genre for which music was often beside the point. Bands replaced characters in their names with obscure keyboard symbols that were exasperating to type, unpronounceable, and quickly forgotten. Blissed Out became BL§§D ØU†, there was a producer called †‡† (pronounced “Rrritualzzz”), and even nu-metal critical darling Chino Moreno, frontman of the Deftones, got in on the action with ††† (pronounced “Crosses”).

It was a telling moment: Moreno’s music as Crosses didn’t actually sound anything like what listeners had come to recognize as witch house, but the aesthetic touchstones were there. Finally, a genre of music designed to exist only on the Internet had become identifiable exclusively by aesthetics that had nothing to do with the music itself.

Witch house was so loosely defined that otherwise non-witch-house artists eventually got lumped in if their music was dark. Some made sense: There was White Ring, which sounded so much like Salem that I thought it was Salem. oOoOO (pronounced “Oh”) veered closer to trip-hop, and so did Holy Other, but they were lumped in too. Even Clams Casino, a New Jersey producer who got his start producing for Lil B before helping define A$AP Rocky’s sound, made it into the murky parameters of the genre. Balam Acab turned out to be a kid from Ithaca College who wore Tevas before it was decided they were cool again. No one seemed to really know what witch house was actually supposed to sound like, but everyone knew they didn’t want to be part of it.

In 2011, it hit me: As much as witch house had ruined itself, I, and anyone else who had at least a passing interest in the genre, had helped ruin it.

I was at the Primavera festival in Barcelona, watching Salem play a very late set. Its music had taken a new tone: Rather than smears of blown-out guitar ramming up against chain clanks and drum machines, it had taken chunky rave synths and slowed them down to a crawl. It even performed a mutated version of Alice Deejay’s “Better Off Alone.”

Salem’s music always sounded a whole lot like taking every downer at once, but now it seemed like the drugs were wearing off. I stood at the back of the crowd, watching as people streamed away from the stage like they were witnessing some kind of abomination. I thought it was actually pretty good.

Salem had recently made a few bad choices. Donoghue had begun rapping, manipulating his voice to a point of complete unrecognizability. He was accused of trying to sound black, and it did not go over well with fans or critics.

It didn’t matter that Salem seemed to be taking its sound in a promising new direction. An early version of the Internet destruction cycle had kicked in. Salem’s live shows had always been notoriously bad. Watching the band was more about the spectacle. Maybe it was getting better, but that didn’t really matter.

It’s quaint to think about now, but the Internet back then felt a little less … Internetty. A hype cycle was still a hype cycle, but it was sincere enough that it didn’t quite seem possible that a bunch of people disliking something on Twitter could actually end that thing. But in a way, witch house covertly riding off on its broom (sorry) was for the best. There were some good ideas, and left to grow and mature on their own, divorced from the backlash and politics, they found their way directly to Kanye West and, spiritually, to artists like Earl Sweatshirt, who pushed the blurry production into new, more fully realized sonic territories.

Right now, you can still find bands that carry the witch house mantle. There had been a witch house forum where people would post their own MP3s, make compilations dedicated to American Horror Story, and debate the merits of Mater Suspiria Vision. Recently, I went to see what was happening and found the entire page replaced by television static, the X-Files “X,” and the phrase “The witch is out there.” Once again, a genre that was rooted in appropriation from others had moved further into confusing pop-culture-influenced obscurity.

Much of that forum, it seems, has migrated to a small Facebook group. The most recent post, from May 21, is from Witch-House.com and says “how can you kill something that is already dead?” Five people liked it.