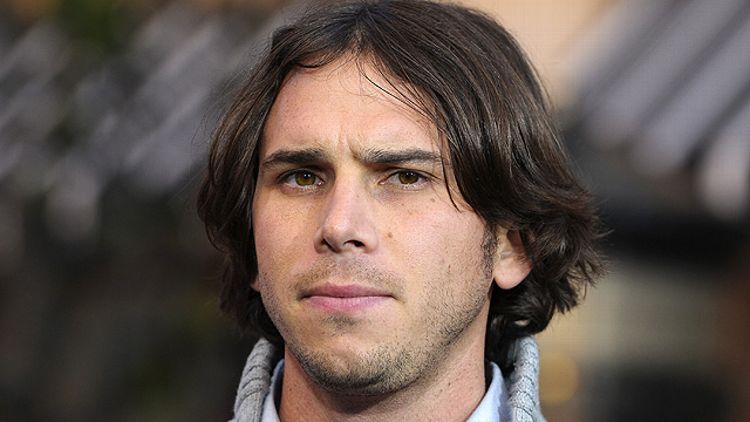 The Bachelor Saga Continues: “As quickly as the snowcapped mountains faded in the distance, so did Flajnik’s feelings for his betrothed. As Courtney Robertson’s abhorrent behavior unfolded on TV, Ben began having issues with what he saw. Instead of talking to Courtney about it, he just started avoiding her. They haven’t split, but he basically stopped talking to her. He buried his head in the sand.” HEALTHY! “And then he turned his attention to other women.” Back in San Francisco, Flajnik has been “cheating on Robertson” with “three different women.” I mean, he did say he always wanted to have sex with a model, not that he wanted to grow old with one. “He’s drinking and hitting on women, and pretty much acting like a single guy,” hanging out at Bay Area dive bars “teeming with Bud Light cans, free popcorn, and adoring Flajnik fans wearing skimpy clothing.” Ladies Love Cool Flajnik. After the bar it’s All Star Donuts, where Ben picked up a dozen. “I’m well-versed in doughnutspeak,” he supposedly said (what?). After taking one girl home, he was spotted with another the very next day. “Ben went on The Bachelor to gain fame, money, and exposure for his business. Why not complete the package by choosing a model named Courtney who is nothing more than arm candy? He has always been an egomaniac and narcissistic.” Meanwhile Courtney is finding that turnabout is fair play. “Courtney did develop feelings for Ben. She cares for him and wants to make it work. She’s frustrated. She’s been trying to figure things out, but he isn’t talking to her.” They remain “in a gray area. She feels very disconnected from him, and he can’t stand confrontation.” At the post-show special taping, Flajnik admitted, “I am not used to breaking up with girls face-to-face, and I am not very good at it.” Send that bitch a text dumping! Bitches love text dumpings. A friend says, “What kind of guy just stops talking to his fiancée? He’s a coward.” Look, you were promised one rose, not a fucking rose garden.

Most Random New Power Couple of the Week: “Singer Toni Braxton and Eddie Murphy are seeing each other and very into it.”

Misc/Etc: “Bitch, you ain’t going to put that on no website!” “Glenn Close listens to Led Zeppelin” “Royally random” “I’m planning for the apocalypse” “just grab it and jab the guy in the solar plexus!” “Zac Efron was reaching into his pocket when a condom fell out onto the red carpet” “I have walked on every continent” “I’ll be a big blob watching myself on the couch.” “Sandy gets handsy!” “Gothic nun outfit” “Meryl Streep scarfs down a Fatburger” “A regular at Studio 54 by age 9” “Growing up as an overweight flamboyant kid” “He just insists on humiliating her” “the pro baller turned part-time DJ” “ABSOLUTELY NO CARNATIONS” “I also got very comfortable seeing nude people” “Casper the friendly date” “backstabbing Bible blogger” “Miami Mound Machine.”

Destroyed by Their Moms: “When a celebrity mom blurs the lines of parental authority by partying with her daughter, tragedy often ensues.” A clinical psychologist weighs in: “Pathological, narcissistic mothers use their daughters as confidantes and friends.” Some examples: Rumer Willis, whose mom, Demi Moore, “has had to deal with the need to stay young in the celebrity world. She’s wanted to show that she’s alive and vibrant.” After Demi’s recent emergency room escapade, Rumer’s been partying harder than ever. “Demi let Rumer run wild when she was younger. Now her mom, who helped create Rumer’s issues, is too busy dealing with her own to help Rumer with hers.” Or how about Whitney Houston and Bobbi Kristina? “Whitney and Bobbi did cocaine four nights in a row the week before she died. They were on a full-fledged bender together. Bobbi learned all of her bad habits from her mother; they were more like sisters than parent and child.” A source says the pressure to be mom’s party buddy and BFF is “too much for a teenager.” And of course there’s Dina and Linsday Lohan, whose “alarming exploits have become a textbook example of mother and daughter going off the rails together.” You mean blowing rails together? “I walked into the bathroom, and Lindsay and Dina were both standing by lines of white powder laid out on the windowsill; Lindsay had a credit card in her hand.” They were obviously setting out ant poison in case any ants tried to come in the window! “Dina’s unique style of party parenting has been an issue” as the two “have blazed a trail through nightclubs” and showed up to a recent Chateau Marmont party in matching black outfits. An eyewitness said “it was weird and reeked of desperation.” That’s how Sevin Nyne smells.

J.Lo & Casper Smart: Friends call Lopez’s 24-year-old boyfriend “The Biggest User” behind her back. “Jen’s friends and family are concerned that Casper is using her for fame and fortune. They think after he cashes in, he’ll dump her like yesterday’s news.” The “thrice-wed Jen seems to be indulging Casper’s every whim” and pals are “worried that Jen will wind up with a broken heart again and humiliated. It’s so obvious to everyone but Jen that he’s using her.” She’s been giving him money and “at this rate she’ll go broke supporting his champagne tastes.” He has celebrity aspirations of his own and “needles Jen to introduce him to music executives and entertainment bigwigs.” Disapproving friends get kicked to the curb. “Jen dumped two longtime girlfriends because they were slamming Casper. Jen exploded, calling her friends traitors.” The friends think the romance is “doomed” and that Jen will find out too late. “Casper is a jerk. Eventually Jennifer will learn this painful truth.”

Gwyneth and Rob Lowe: “Just friends? Gwyneth Paltrow and Rob Lowe were spotted over Presidents’ Day weekend getting very close at the Santa Barbara Zoo.” There is a blurry picture to prove it. “They were having a great time and looked like a couple. They were playfully touching and whispering in each other’s ears.” Paltrow and Lowe are both technically, you know, married to other people who were nowhere in sight. But Gwyneth’s kids were present. “It was the four of them for a quiet day at the zoo.”

Misc/Etc: “Gold lizard sandals” “Her hand was lingering near his crotch” “Jonah Hill was stuffing his face with high-calorie snacks” “a statement bow” “looked like he wanted to eat her up” “chowing down on spaghetti on his hotel bed” “Greedy Grandpapa” “a midriff-baring ensemble made from $1 bills” “To be honest, I felt kind of used” “the frisky duo gyrated against each other on a couch” “These catty women need to stop the nonsense!” “She’s slimmed down to snag a man” “keep your eyes off her thighs” “A lot has changed since then, including Sandra’s face!” “this rocking old dog” “In LA everyone just stands with their drink and looks at each other” “The thought of running for an hour is horrible” “up close and personal with a macaroni penguin.”

Angelina’s Ruining the Wedding: After Angie finally caved to Brad’s wish to make it legal, “she’s become very bossy and controlling about her wedding. It’s her way or no way.” Brad’s happiness about the impending nuptials didn’t last long. “Livid over losing the emotional leverage she’s held over her partner for so long, Angelina wants to take back control any way she can, and she’s doing it by being the world’s worst bridezilla.” Oh no, she has preferences! “Insisting on wearing a black gown rather than the fairy-tale dress her daughter Zahara has pleaded with her to wear.” Oooh, I hope it’s a black leather dress! “Angelina has opted for obscure sad Yugoslavian folk music instead of a band the kids can dance to.” You can dance to that! Yugoslavians do! “She’s refusing to let Brad pick out her wedding ring and, to her children’s horror, she’s even banned cake.” Reverse Marie Antoinette! “She doesn’t eat cake and says it would be wasteful.” While Brad wants to marry in France, Angie demands it be in Thailand. The kids were upset when she threatened to elope with Brad at City Hall but “backed off that idea when they all started crying.” She didn’t even tell them about Brad’s Oscar nomination. “Clearly Angelina, 36, is more interested in having control over those in her household than she in making them truly happy.” The kids want a big showy party with “tons of food and flowers,” traditional style, but Angie “wants something much more minimal.” God forbid a woman have no desire for a big princess-y wedding. Jolie’s two previous wedding ceremonies involved a “blood-scrawled T-shirt” (Jonny Lee Miller) and a “cheesy Vegas ceremony” (Billy Bob Thornton). “Clearly Angelina knows how to get her way.” But “the most successful marriages are not about control, they’re about compromise.” Unless, of course, “she’s trying to force Brad into being the bad guy and calling off the wedding. She’s insisting on so many things. It makes you wonder.”

Best Stand-Alone Sentence From the Oscar Party Roundup: “Cloris Leachman, 85, took plates from her table and put them in front of Modern Family‘s Jesse Tyler Ferguson, then danced wildly to Foster the People.”

Misc/Etc: “From brooding hipster to total ham” “who is like 9 feet tall” “Lindsay’s nose job fail” “She needs a shower!” “between crazy and mature” “cream dream” “feeling slaphappy?” “flaunted the flawless results” “They’re also talking about having a second ceremony in Africa” “I love doing everything in my bed” “the mom-of-eight can’t find a man” “Russell Brand controlled by a guru” “the hot mama had already snatched back her title as sexy-superstar-about-town” “harboring a secret crush on one of Hollywood’s most loathed lotharios “She’s much too vain” “They definitely slept together, 100 percent.” “either that or she had just chowed down on one giant burrito!” “His body is a wonderland?” “Look, it’s that bitch from Teen Mom!” “There are just so many haters.”

Adele on the Silver Lining to Her Vocal Cord Issues: “I enjoyed having to be quiet. I’m so mouthy, so I quite like to be forced to be quiet.”

More Dating Tips From Taylor Swift: “I’m just stupid about it. I’m always like, ‘I’m not gonna trust people anymore, I’m gonna be one of those dark, twisted girls who guys love because they’re all, like, guarded and stuff.’ And then I just trust people again.”

Misc/Etc: “Sparkly presents!” “anorexic whore!” “Being single is cool!” “kept her ruby red heels on while shopping for mattresses.” “The actor was on vacation with his equally smoking-hot wife.” “the weight will literally fall off” “He’s fucking blown it.” “Brad drove strippers to parties.” “YOGA’D HER WAY TO YOWZA!” “I was just turning into a doughnut.” “I took just every drug possible: coke, ecstasy, heroin, everything.” “like a good little vampire, went right for the virtual neck.” “silly, brawny himbo” “Teenage Nightmare!” “Lordy, Lordy, This Gorgeous Gal Is 40!” “Deleting the lbs.” “I know I don’t look good in high-waisted pants” “It’s always fun to be snarky and a brat” “My boyfriend loooves my body” “Once the poppers have cooled, paint the vodka over them.”

Five Questions on American Idol: Yes, It's Ladies' Night, But Is the Feeling Right?