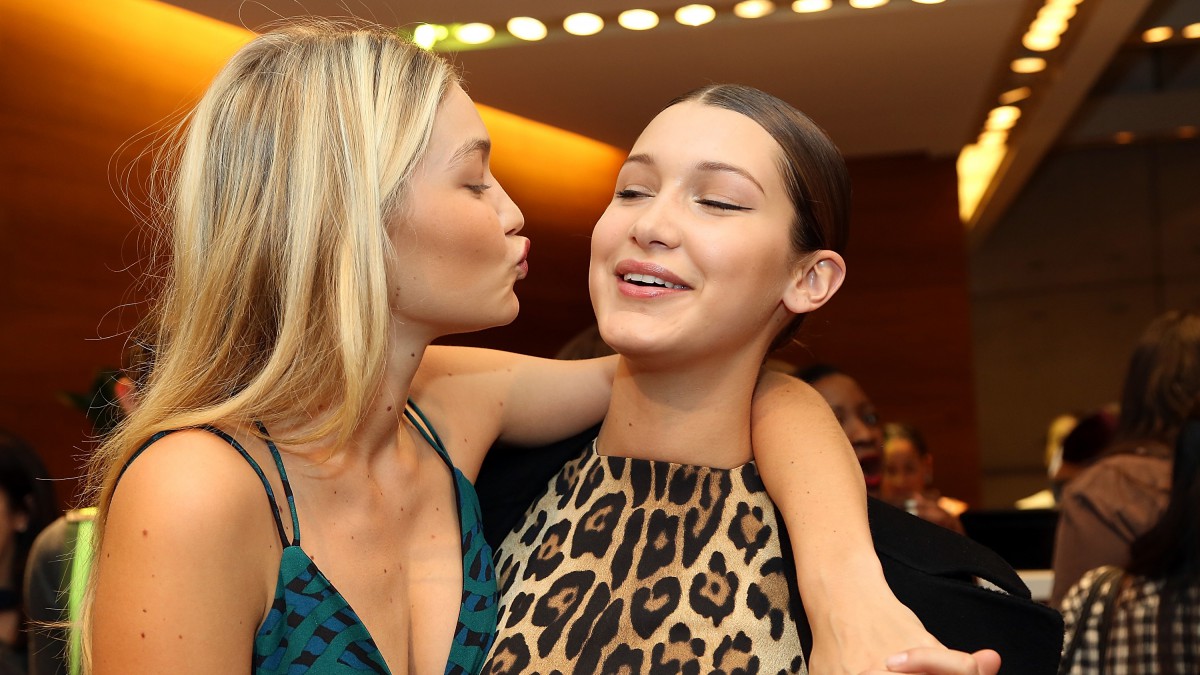 You may not know Gigi and Bella Hadid, the two young, beautiful, and filthy-rich sisters from Malibu, but you will soon — at least if they have their say. They are both signed as models with the IMG agency, which hopes to capitalize as much on the images they project as it does on their faces. Gigi in particular embodies a modern-day Malibu Barbie: blonde, gorgeous, rich, and fairly famous. Bella is just as rich, beautiful, and mildly famous, but a year younger and brunette. Eighteen and dark-haired, she skews high-fashion — toward androgyny and sophistication; she looks a bit like Jennifer Lawrence as Katniss Everdeen. Gigi, 19, gets styled like Brigitte Bardot — with big hair and soft cleavage, meant to appeal to men as much as women.

From their Instagram accounts, the sisters seem like a real-life version of Jessica and Elizabeth Wakefield, the beautiful twin sisters from the Sweet Valley High stories. Instagram is littered with accounts like the Hadid girls’ — half fashion shoot, half lifestyle blog, supposedly candid looks into an aspirational lifestyle of wealth. But the Hadids have taken it to a new level: They don’t just look like they’re starring in fashion shoots. Sometimes they really are. They’re self-styled selfie supermodels who are becoming legitimate models who do shoots in which they’re photographed being selfie-obsessed California girls. For the fashion world, they’re the perfect conduit to the populist world of self-made Instagram stars, the bridge between the establishment and reality.

The new issue of Vogue features a fashion editorial spread by Mario Testino starring Gigi and Kendall Jenner as themselves, essentially: two young hotties living the Clueless lifestyle as only beautiful heiresses in L.A. can — shopping, driving, drinking iced coffee, and lounging by the pool with boys (Justin Bieber in full Blue Steel mode and Fault in Our Stars star Ansel Elgort). The spread calls Gigi and Kendall “California Girls” and depicts them as a dizzy Us Weekly–influenced version of the trope. The photos are mostly stylized faux-paparazzi shots, a joke about how these kids get followed by photographers all the time, but there are also fake selfies. The scenes depict a paranoid L.A. dream, with cameras around every corner.

Sometimes the girls behave as if they’re pretending the camera’s not there, talking on their cell phones and acting like they don’t notice their audience. Other times they smile right into it, like maybe the paparazzi will go away if given what they need. It is all very meta, of course, because while Kendall and Gigi might wish to avoid paparazzi shots of their less flattering moments, they’d never turn away from the attention of Vogue.

If you're in NYC, the SI girls & I will be back at Herald Sq tomorrow.. I'll be there from noon (if not earlier) til 2pm! Thank you so much to everyone who came out to #SISWIM Swim City today to get the new @si_swimsuit 2015 issue and hang out! Hope you had fun! We'll be in Nashville Wednesday & Thursday for another fan festival: SWIMVILLE!

What fascinates me about Gigi and Bella is how they are following a script. These girls are not only famous for being famous, they’re SELF-STYLED famous for being famous. Blame the Hilton sisters or the Kardashians. The Hadids are already a part of the latter family’s fame matrix; Kendall tells Vogue that she and Gigi met at Nobu Malibu, a central location in the rich-kid solar system. The Hadids’ mother, Real Housewives of Beverly Hills star Yolanda Foster, is the fourth wife of record producer David Foster, and one of Foster’s other ex-wives (actress Linda Thompson) is also an ex-wife of Bruce Jenner’s. It’s mighty incestuous in the Malibu enclaves where the Hadid girls live. Their stepsisters Erin and Sara Foster have a new faux-reality comedy show on VH1 called Barely Famous. Everyone’s a little bit famous!

If anyone is singularly responsible for the Hadids’ rise, it’s Yolanda, a former Ford model who pushed both girls (who seemed quite willing) into modeling from a young age. Gigi was already modeling at age 2, for Guess. These girls have been groomed to become idealized images since birth. One of Yolanda’s Real Housewives plotlines centers on her iron-fisted control over her daughters’ careers, which she maintains by constantly citing her own experiences as a teenage model. In one unforgettable moment, Yolanda tells Gigi not to eat a slice of cake at the girl’s own birthday party, cutting her daughter the world’s tiniest crumb to eat. When the Sports Illustrated swimsuit issue, which Gigi was photographed for, came out, Yolanda tweeted, “This is why @GiGiHadid choose 2 have a small bite of her cake and I supported her by example #dedicated #committed” with one of Gigi’s bikini shots from the 2014 swimsuit issue. Gigi won’t get to eat that big slice of cake any time soon — she’s booked for the 2015 Pirelli calendar.

❤️This is why @GiGiHadid choose 2 have a small bite of her cake and I supported her by example #dedicated #committed pic.twitter.com/uNJBSBm3Dx

The cost of the Hadid sisters’ glamorous, carefree lifestyle might be not actually being carefree. Gigi just went through her first scandal, when TMZ published a paparazzi photograph intimating she’d been doing coke at a Victoria’s Secret Pink promo DJ gig. Gigi claimed she was bending over to tie her shoe, not to snort something off a table. Bella got a DUI after blowing through a stop sign at 4 a.m. on PCH and nearly hitting a cop car while driving with a suspended license. The DUI was a plot point on RHOBH: Yolanda was on a yacht trip in Spain with some of her castmates when a frantic phone call summoned her home early. It was a whole two episodes’ worth of story.

But so far at least, these are scandals that the establishment fashion world can handle — very Malibu, not Calabasas. The Hadid sisters are the perfect surface on which older people in the fashion industry can project their idealized dreams of youth, beauty, wealth, and power — sexual and monetary. They are an adult’s version of what it must be like to be a rich teenage dream.

Scrolling through their Instagram feeds, I don’t feel the jealousy or annoyance I sometimes feel when somebody’s aspirational photos are a little bit too aspirational and perfect-looking. Instead, I feel lucky I didn’t grow up with the kind of pressure or spotlight the Hadid girls face. Frankly, I’m glad I didn’t grow up with social media at all. Just thinking about the idea of teenage selfies makes my skin crawl. Maybe that puts me squarely out of the sisters’ intended demo, but I follow them anyway. There’s something kind of Virgin Suicides–y about seeing them interact with each other, making me feel like I’m spying on something intimate, even though it’s purposely performative. The Hadids have achieved a kind of Platonic ideal of Instagram fame — all the likes and fans without the affiliated tabloid trashiness. They already have a legitimacy as models that the Hiltons and Kardashians couldn’t achieve. The Hadids are famous for being models, not wannabes who benefited from reality show fame, even if the truth is a little more complex. It’s the narcissism of the smallest possible differences.

And they’ve been legitimized as models because they’re really, really good at it. A picture is a picture is a picture, whether it’s on Instagram or published in a fashion bible. Traditional hierarchies of image production are dead. Even real celebrities want to be Instagram famous now. It makes me depressed to see Madonna, who pioneered the idea of a self-controlled career fueled by flattering self-images, struggling to master social media and begging her fans for likes. Gigi Hadid has 2.5 million followers. Bella has only 574,000, but even that works for the narrative that Gigi is “mainstream” while Bella is “indie,” although the only major difference in their modes of beauty is a Betty-and-Veronica style distinction in hair color.

With the two biggest babes eva. @BELLAHADID @BADGALRIRI you're the baddest hottest goddesses around 🔥🔥 #FLA

The Kardashian sisters want to make it look effortless, but it’s always obvious how hard they’re actually trying. The Hadid sisters really do make it look easy — never a bad photo or an emo caption, never a gray cloud in the sky. That’s the true fantasy: No regrets, just love.

Lowbrow Highlights: The Finale of ‘The Challenge’ Was Just Too Gross