The Office Takes a Quick, Ill-Fated Trip to The Farm 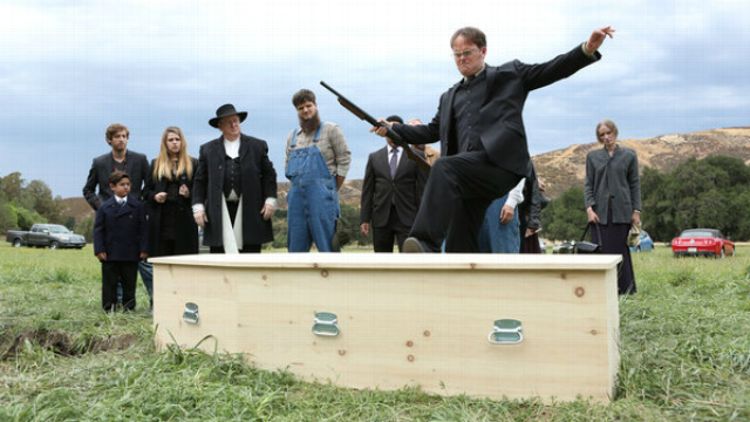 Nostalgia, like the human neck, is one of humanity’s greatest weaknesses. Thus spake Dwight K. Schrute, assistant to the regional manager of a paper company lo these many years, and doomed to remain one for untold more. Thankfully, despite NBC’s bullheaded dependence on humanity’s other great weakness — an inability to let go — those years will be mercifully untelevised. Last night’s episode of The Office was a glimpse into what could have been and now will never be: a proposed spin-off called The Farm, in which Dwight and his heretofore unseen siblings till some inherited soil. Instead, the entire idea was buried; the people we met last night will never be seen again. It shouldn’t really be a surprise. As any actual farmer could’ve told network president Bob Greenblatt, you can’t expect to reap fresh rewards from such relentlessly overworked land.

Though it was just the last in a long run of attempts to keep a once-golden goose laying eggs for the Peacock — first was James Spader, then Catherine Tate; this year brought Clark Duke, Other Guy, and dreadful Brian, the boom-mic operator who went bust — last night’s backdoor pilot was actually the first effort to graft a bit of The Office onto newer stock in order to keep at least part of it alive and growing beyond this final season. In more human terms, it was like a reverse heart transplant, in which a dying organ is transferred into a young, healthier host. Regardless of which tortured metaphor you prefer — animal or vegetable, fair or fowl — the point is, it didn’t work. In this case, though, it’s not worth blaming the higher-ups. Backdoor pilots — industryspeak for test runs of potential new shows shoehorned into episodes of an existing hit, like secret spinach baked inside an otherwise delicious brownie — are always a tricky business. For every Mork & Mindy and Laverne & Shirley (both backdoored off of Happy Days), there are a dozen Valley Girls (DOA from Gossip Girl) and Huggy Bear and the Turkey (ditto from Starsky and Hutch). (For a great list of these ill-advised almost-weres, check out the AV Club. The Hail Mary “let’s move them to Hawaii!” episode of Green Acres sounds remarkably similar to what The Office tried to do last night.)

A hit TV show can’t spread its good mojo like a lucky gambler in Vegas; proximity alone isn’t going to cut it. A successful spin-off needs to be able to stand on its own. That’s something Frasier got right from the beginning. It helped that it was a straight spin-off, with no forced overlap with Cheers. (At least at first.) But the main reason Frasier hit and The Farm missed was that Frasier Crane’s idiosyncrasies were equally well-suited to either a supporting player or a lead. The character’s uniquely appealing blend of arrogance and ignorance was able to drive story (Frasier’s romantic foibles!) and react to it (Frasier comments on the romantic foibles of others!).

This is not the case with Dwight Schrute, a broadly drawn comic foil who has only gotten broader as The Office has aged. The quest to humanize him has proceeded in fits and starts ever since Steve Carell departed; overall I’d say that it’s been one of the more successful things to emerge from these last two dismal seasons. (Dwight has always been at his best when struggling with his strangely affectionate relationship with Pam; it was a mistake not to have her graveside last night.) But deep quirk shot through with occasional kindness isn’t enough to build a series around. Former Office showrunner — and current Toby Flenderson — Paul Lieberstein actually came up with a clever enough conceit to camouflage this problem: Since sitcom families need to be loved as well as laughed at, the new Schrutes were ostensibly more normal than their rural brother. I liked Thomas Middleditch’s Jeb, a hapless, rumsprung climber who’d suffered some bad luck involving “the smoking of pain management.” But Majandra Delfino’s Frannie (along with Hollywood’s It Kid of the moment, Blake Garrett Rosenthal, as her suit-and-tied son) was a non-starter; other than a faint stab at feminism, she was merely a new set of eyes brought in to do the same rolling Jenna Fischer’s been perfecting for nearly a decade. A deeply strange decision to show the family jamming to a tuba-enhanced cover of a song by contemporary whimsy-terrorists the Decemberists felt desperate and cheap. Ultimately, it was both impossible to imagine what The Farm would be about going forward and to gin up enough interest to care. After years of ratcheting up his eccentricity, having Dwight around is like putting one of his beloved beets into a salad: It ends up staining everything.

Because the decision to have The Farm buy itself was made months ago, last night’s episode devoted just as much time to the return of Todd Packer as it did to the table-setting funeral of Dwight’s dead aunt. I’m not sure if this was always the intention, but it seems unlikely, especially considering how rushed the second half of the Schrute family reunion felt. Were we meant to think that Dwight had successfully convinced his siblings to stay? Or does it just not matter? Either way, I can’t believe such a weighty decision was orginally intended for the episode-ending tag. Whatever the case, the strange split didn’t do either story many favors. The strong opening, with Dwight flinging dirt and Packer flinging mud, was actually delightful, with plenty of the character-based laughs The Office is still capable of delivering on occasion. Packer’s comments about Pam’s “pam-pam”s was almost as good as his vanity license plate. (“WLHUNG.”) But by the time the momentum shifted to the fake-beard pity party at Schrute Farms, the dosed-cupcake plot was running on fumes. (I still think the producers are punishing Ed Helms in some way. The ostensible star of the show got one line and then a brutally extended montage that involved underwear wrestling with Brian Baumgartner.)

In the end, Lieberstein and Rainn Wilson — whose willingness to steer into the skid of inevitable typecasting is both noble and tragic — each did their best with a doomed cause. No matter how much clever exposition you can manufacture or nuance you can attempt to staple onto your performance, it’s just not possible to start something new while at the same time feverishly tying off loose ends. The Office has been dangerously drowsy for two years now. It wasn’t the intention at the time, but I have to believe that last night pumped a fatal shotgun round into its casket. It’s a rough analogy, but I actually see it as a good thing. Now that all of us — cast, crew, and the few remaining fans — understand we’re at a funeral, hopefully we can move past denial and finally get down to grieving and acceptance. There are six episodes of The Office left. I look forward to remembering the good times, not the bitter, brutal end.

The Kardashiad, Week 7.5: Keeping Up With Kris Humphries's Legal Attempt to Destroy His Ex-Wife