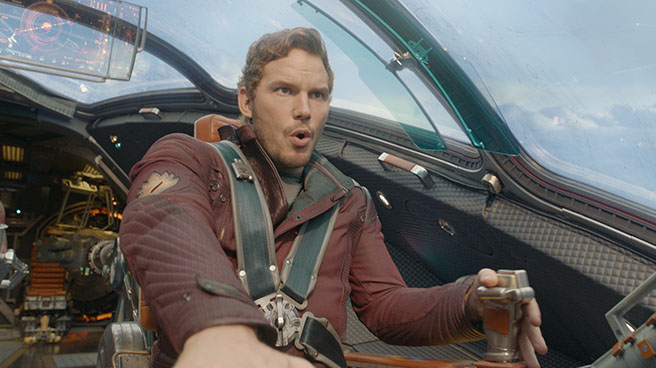 The new Guardians of the Galaxy trailer just emerged from its cocoon deep in the third-string underbelly of the Marvel Universe to sate your hunger for spaceships, explosions, Bradley Cooper–voiced CGI raccoons, talking trees, a green Zoe Saldana, David Bautista without a shirt, and Chris Pratt’s very existent abs. Guardians director James Gunn is perhaps best known to the nerd community for his 2006 small-town mutant zombie flick Slither, which starred Firefly alumnus Nathan Fillion and the always-wonderful Elizabeth Banks. Chances are you didn’t see it, but Slither’s stylistic mash-up of comedy, action, sci-fi elements, classic rock, and pop culture callbacks are in full evidence in this latest Guardians trailer.

Before I get to my argument why this film could be the creative savior of the entire genre, I think it’s important to state that, full disclosure, Marvel Studios is owned by Disney and my paychecks have little pictures of Mickey Mouse on them. Fuller disclosure: I have read and enjoyed the comic books that (probably) form the basis for the movie’s plot; I will see this movie in the theater, probably at a midnight release with a decent whiskey buzz; and I feel only slightly ashamed of myself.

OK. So, you might be tired of corporate superhero movies by now: eternally rebooted capes and tights, slugging it out with aliens or mad scientists or false-flag Nazi cults over this and that cosmic MacGuffin in the streets of a highly urbanized population center as skyscrapers disintegrate into gray puffs of uncomfortably ghoulish reflected collective memory. I get it.

Here’s why Guardians of the Galaxy might be cool, though:

The characters come from a somewhat niche corner of Marvel’s continuity, generally referred to as Marvel Cosmic. Basically: space shit. The advantage of drawing on characters from the cosmic spectrum of Marvel’s museum of superhero brands is the intrafictional separation of said cosmic characters from the normal earthbound goings-on of your Spider-Mans, X-Peoples, and Avengers, meaning less continuity structure and more creative latitude for the storytellers to get super weird. 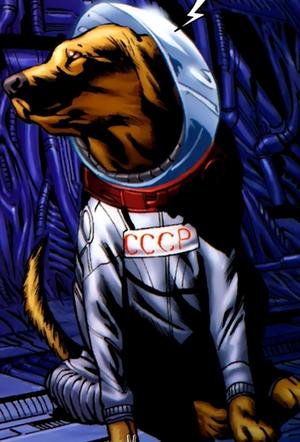 How weird? Let’s see, the Guardians are based out of an interspecies space station called Knowhere that is housed in the small-town-size severed head of an ancient robot alien perched precariously at the edge of the universe. The chief of security on Knowhere is a telepathic Labrador mix of Russian cosmonaut extraction, named Cosmo, complete with 1950s fishbowl helmet. One plot arc in the comic books revolved around a mission to seal fissures in the space-time continuum, which opened up the [makes air quotes] normal Marvel Universe to an alternate dimension called “the Cancerverse,” where death does not exist, everyone is vaguely satanic, and there are lots of disturbing hentai tentacles.

Knowhere: basically the International Space Station, but in the head of an alien and with several dive bars.

Comic-book universes are known for their cross-over events — basically, money grabs in which the reader is induced to buy titles they wouldn’t normally purchase because this super team’s narrative suddenly becomes intertwined with that super team’s narrative. Over the last 10 years Marvel Comics has run something like one or two of these a year, some good, many just OK, and a few so bad they make you question your life choices. The two crossovers that spawned the onscreen iteration of the Guardians of the Galaxy are among Marvel’s very best in that period, primarily because writers Andy Lanning and Dan Abnett could do whatever they wanted, as big as they wanted out in this far-flung niche of corporate comics land. When the Avengers face off against Thanos and a bunch of terraforming aliens, you’re pretty sure the Avengers aren’t going to die (or even comic-book die, i.e., die for a few months or a year until their undead souls are rescued from the clutches of Hel or death or whatever). The Khrushchev-era Russian space dog, some B-roll quasi-insectoid aliens who have barely appeared in mainstream continuity since the Carter administration, and a half-human named after penis euphemisms whose book has been canceled twice? The suits who make licensing deals could not care less about them, and that made for better stories.

That will probably change if this movie is a hit. But right now, no one knowing who Rocket Raccoon is is a big plus. It’s a gamble, but a gamble to reinvigorate an overstuffed movie genre by injecting it with some truly strange ideas.

Pros and Cons: Alfonso Cuarón Directing the 'Harry Potter' Spinoff 'Fantastic Beasts and Where to Find Them'