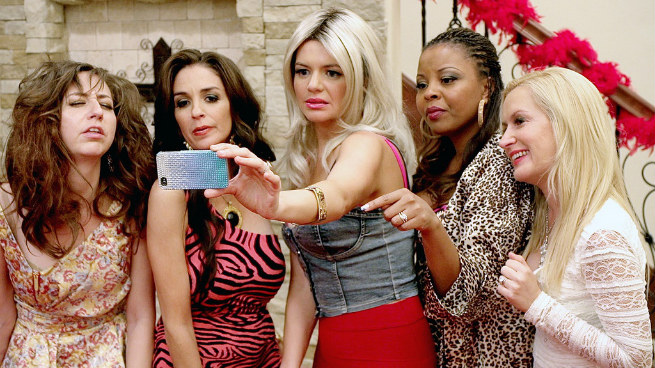 How do you parody a series that already verges on self-parody? Hulu’s new original scripted series The Hotwives of Orlando answers that question: You do it lovingly. Hotwives’ creators, Dannah Phirman and Danielle Schneider, clearly know their Real Housewives inside and out. The resulting take on Andy Cohen’s cash cow is incredibly specific with its satire, and while you don’t have to know Housewives arcana to follow its plotlines, there are constant Easter eggs for superfans. There’s a whole show dedicated to the incredible medium episode of the Beverly Hills Housewives franchise. Phirman plays a character named Alli who is a parody of BH “friend of the housewives” Dana Wilkey, who memorably bragged in one episode about her $25,000 sunglasses. Executive producer Paul Scheer plays an Andy Cohen character named Matty Green who does bumpers at the end of the show and hosts the season finale, a reunion episode. Shows like Eagleheart, Kroll Show, and NTSF:SD:SUV:: have previously demonstrated the merits of mocking TV shows that are already very ridiculous in insanely accurate and minute detail. The Housewives universe is large and deep, but you don’t have to know that much about it to jump into Hotwives. It’s funny on its own merits, with sharp writing and a stellar cast of underrated comedic actresses, who all do career-high work.

Hotwives’ six leads essentially play composites of existing real Real Housewives stars — it’s like a comic-book crossover, in which you get to imagine the Housewives universes colliding. (I’m actually very surprised that Bravo hasn’t done an all-stars season yet.) Phirman and Schneider are UCB vets, and they’ve assembled a cast of hypertalented comedians. Happy Endings’ Casey Wilson plays Tawny St. John, a blonde trophy wife who represents the Orange County branch of the show, with a smattering of Kim Zolciak from Atlanta. Tymberlee Hill is Phe Phe Reed, a composite of the most popular Atlanta housewives. She has Phaedra Parks’s sketchy legal practice, NeNe’s constant zingers, and produces music like Kandi Burruss. Danielle Schneider is Shauna Maducci, who is just Teresa Giudice from New Jersey straight up, down to her cluelessness about her dirtbag husband, Anthony (Matt Besser). Andrea Savage (Sweet Valley High and Stepbrothers, among other things) is Veronica Von Vandervon, who, as you may have guessed, is basically BH’s Lisa Vanderpump. The Office’s Angela Kinsey is holier-than-thou Crystal Simmons, an OC-styled housewife with a Kyle Richards–esque perfect life and messy sister. Kristen Schaal plays Amanda Simmons, a former child star who is essentially BH’s Kim Richards. Schaal is always great, but this might be her best role to date; she perfectly captures the childlike/sad clown/Judy Garland quality that makes Kim Richards such a compelling character to watch.

All of the Hotwives deserve to be household names, and watching six women be funny together for prolonged periods of time is still so relatively exotic. I felt instantly comfortable in the Hotwives’ Orlando, like I do watching Orange Is the New Black or the Real Housewives. Worlds populated by and revolving primarily around women exist everywhere in real life, but remain woefully underrepresented in media. That digital platforms are the ones making the greatest strides for female representation in media lately doesn’t seem like a coincidence.

Hotwives is essentially a tribute to the cultural influence of Housewives, playing on both its conventions as a TV franchise and the flamboyant MILF d’un certain âge archetype that is its gluten-free bread and butter on the side. The themes of the Housewives franchise are skewered; tacky displays of wealth, fights and alliances between frenemies, strange parenting techniques, the idea that older women are sexual beings, the impending specter of death, and consuming champagne and macarons at fancy daytime garden parties. I found myself blowing through all the episodes in a day, and it was pleasurable in exactly the way that a daylong Bravo Housewives marathon is. It’s like a bubble bath for your brain. Watching rich women argue about the pettiest of bullshit is calming to me for some reason.

The Housewives franchise gets into some really deep issues at times, and the bubble-world wealthy superficiality is layered with relatable emotional issues like a mille-feuille. When they’re not doing a constant array of weird bachelorette party activities for the camera, the Housewives are sometimes dealing with sisterhood, long-term relationships, and (paradoxically, given the franchise’s name) their career ambitions. The Hotwives may be much funnier than the Housewives, but they are much less scary and saddening, because they aren’t real. Luckily this makes them easier to unabashedly love than their Real counterparts. My only complaint about the Hotwives is that there aren’t already eight more seasons for me to stream.

Q&A: Have You Noticed a Really Sad, Creepy Cover Song in a Trailer Recently? Nouela May Have Done It