The Golden Globes Nominations: Lincoln Leads, But Finally There’s Some Recognition for Salmon Fishing in the Yemen 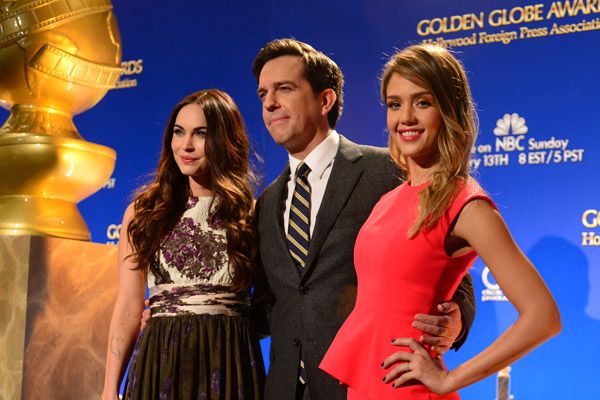 Let’s first focus on the important thing: As result of factors in no way related to their nominees, announced earlier this morning, the 2013 Golden Globes have a really good chance of being great. And that’s because of the “Weekend Update” reunion that’ll be going down in front of the hosts’ podium. Ladies and gentlemen, I give you Tina Fey and Amy Poehler, in their first Golden Globes spot!

As for the nominees: They’re a solid, familiar bunch, with Lincoln and its seven nods out in front of the pack. The most surprising entrant is probably Salmon Fishing in the Yemen, a lesser-known flick that worked its way into a Best Picture, Musical or Comedy slot, as well as Best Actor and Best Actress nods for its leads, Ewan McGregor and Emily Blunt. Then again, this is the Hollywood Foreign Press Association, a.k.a. “The People Who Liked Burlesque,” we’re talking about here, and so who the hell ever knows what they’re thinking. My theory: Yemen is not part of America, therefore is foreign, therefore is perfectly suited for the HFPA. The end.

But with the rest of the dramatic movies field taken up by the familiars (Django Unchained, Zero Dark Thirty, Argo, and Life of Pi), there’s more excitement to be had in the TV categories. Hey, look, The Newsroom is up for Best Drama! And Jeff Daniels is up for Best Actor! Feel free to immediately change your minds about The Newsroom now, haters. Oh, and there’s Girls, up for Best TV Comedy or Musical, and Lena Dunham for Best Actress, TV Comedy or Musical. As Dunham explained on the B.S. Report, when the Emmys gave her a similar nomination, her dad responded by asking, “You got nominated for an award in acting?” So, preemptively: Yes, Lena Dunham’s dad (famed artist Carroll Dunham), your daughter got nominated for an award in acting.