The Five Most Important Things We Learned About ‘SNL’ This Week 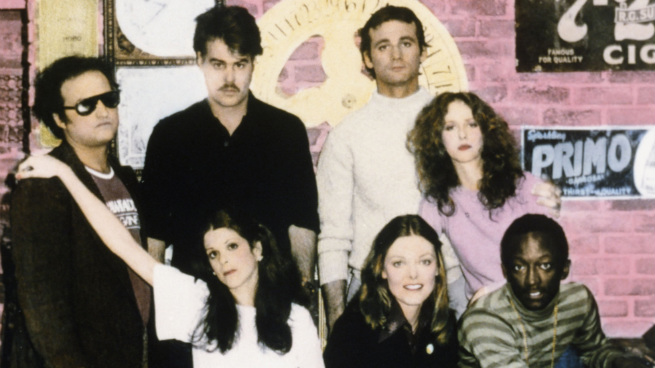 If there’s been a show more closely documented in television history than Saturday Night Live, I can’t think of what it is. The two primary reference tomes — Tom Shales and James Andrew Miller’s oral history Live From New York, and Doug Hill and Jeff Weingrad’s Saturday Night: A Backstage History of Saturday Night Live — cover plenty of ground just between the two of them: We learn all about the fraught beginnings, the coke-fueled early days, and the constant struggle to put on a good show. Then there’s the cottage industry of memoirs from ex-SNLers: That includes Darrell Hammond’s God, If You’re Not Up There, I’m F*cked, Tom Davis’s Thirty-Nine Years of Short-Term Memory Loss: The Early Days of SNL From Someone Who Was There, and even Jay Mohr’s Gasping for Airtime: Two Years in the Trenches at Saturday Night Live. (Tina Fey’s and Steve Martin’s beloved memoirs aren’t as explicitly one-track-minded, but still touch on the show.) Meanwhile, the media continues to scrutinize every lurch, stumble, and step the show takes as closely as ever. You’d think, by now, that we knew everything we ever wanted to know about SNL. And you’d think wrong!

That’s in part because we know so much: We’re so familiar with the old stories that we just can’t help but be curious as to how the new ones stack up. But it’s also because the show is just naturally dramatic: It’s constantly on the verge of falling apart, and constantly birthing arguments; it takes unknowns and makes them our favorite actors more regularly than anywhere else in entertainment; and, at its best, it continues to function as a telling cross-section of American culture. When the aliens land, you could do worse than to show them SNL — and then wait for them to tell you, using their wordless advanced-civilization mind control, that it’s not as funny as it used to be.

This week, we got ourselves a little flurry of SNL-related articles to feed our never-ending hunger, including New York magazine’s profile of Jimmy Fallon and its long interview with Lorne Michaels, plus a New York Times piece on the state of the elusive SNL after-party. So, what did we learn?

1. Things Done Changed: Ever since Belushi and Aykroyd took over a downtown dive and refashioned it as the Blues Bar — their very own postshow den of sin where, as the Times explains, “on a given night, Keith Richards, James Taylor or Sam Moore might be jamming with Mr. Belushi and Mr. Aykroyd’s Stink Band” — SNL after-parties have had a touch of the forbidden to them. But venturing into the modern crop, the Times sees nothing too batty: “Buddakan, an upstairs-downstairs place that conveys all the hail-fellow-well-met of an Italianate spec mansion, never made it to kooky, much less crazy. They could have used another bartender upstairs. Madonna didn’t show. Penny Marshall was there, if that helps, as were Chris Rock and other comedians like Judah Friedlander and Eugene Mirman.” And then, tragically enough: “Oddly, the most resonant image of the night … was Seth Meyers … at last call, head bent and undoubtedly exhausted, signing his bill.” That’s right: The booze. Is not. Free.

2. But Then Again, Maybe They Haven’t: Rachel Dratch, during her early-2000s run with the show, didn’t see much insanity: “When you first get on the show, you’re so thrilled, the party is like another part of the whole Cinderella vibe of the whole thing. You’re not like, ‘What’s up with this party?’ … As the years go on, you know what they entail. It’s still such a ritual. I always went to the party. I didn’t miss one party.” But going way further back, original cast member Laraine Newman cuts down even the Blues Bar’s infamous debauchery: “Pretty soon, I avoided them and I think many others did too … Although we needed to unwind, there was another kind of pressure at that party that became, well … work, networking.”

3. Horatio Sanz Was Always Ready to Rage: Maybe Laraine and Rachel could have gotten some kicks in with Horatio? As Sanz explained to the Times, the debauchery “was a part of the creative process in the beginning, and it’s been written about and talked about, and I kind of wanted to have the same thing for our generation.” That meant “securing a location in Mayor Rudy Giuliani’s New York City that would stay open past legal last-call hours and printing special tickets to be handed out to a more-select set at the after-party. Sometimes, Mr. Sanz said, especially on nights when a sketch of his was cut at dress rehearsal, he skipped the after-party altogether and rode around in his limo with half a case of beer, listening to music and waiting for his after-after to start.”

Sanz, just letting it all go this week, explained a bit further to New York: “We were super-functioning alcoholics, definitely. They say that kind of goes hand in hand with SNL, some kind of substance-abuse issues, because it’s so stressful you easily find yourself blowing off steam a lot.” One specific anecdote: “Niagara in the East Village was [a] favorite bar; Sanz once demanded a ­margarita in the biggest glass the bar had, which turned out to be a vase, and woke up on the sidewalk in front of his apartment.”

4. Jimmy Fallon Could Take You Down With His Mighty Fists of Drunken Rage: And now, possibly most important of all: It turns out that Jimmy Fallon, with a couple of pops in him, becomes an undefeatable Kimbo Slice of a man. As Sanz also told New York, “Yeah, we got in a couple of brawls. I’ve seen Jimmy clock a few people.” One time Fallon poured a beer on a guy’s hat, thinking the hat belonged to a friend of Sanz. “The owner of the hat, we didn’t know who he was, said something like, ‘What the fuck are you guys doing?’ and Jimmy just punched him. He wasn’t that hurt; he just walked into a tornado of drunken stupidity. Yeah, Jimmy could fight. I don’t know where he learned, but he definitely scrapped with the best of them.”

5. Lorne’s Into Dinner: And in the midst of all that alleged-or-otherwise debauchery, what does Lorne Michaels do? Lorne Michaels eats food. Explaining his schedule to New York, Michaels goes deep on his most cherished meal of the day:

Monday we do [a] meeting, usually around 5 or 5:30 p.m … I’m generally either at home or at dinner by eight … Tuesday, around 8:30 p.m., I take the host to dinner … The sets start arriving on Thursday … Thursday night I get to have dinner.

Dinners seem important to you.

Friday, I have to get out, too.

Just making sure you understand all this correctly: On Friday nights, Lorne Michaels has dinner.

In Conversation: Saturday Night Live’s Lorne Michaels [NYM]
Last Night With Jimmy Fallon: Into the Wee Hours With the Heir to TV’s Grandest Franchise [NYM]
Lives of the After-Party [NYT]

'The Bachelor,' Week 5: How to Decide Whether or Not to Have Sex in the Ocean

An Imbalance of Power: The Woody Allen and Dylan Farrow Controversy