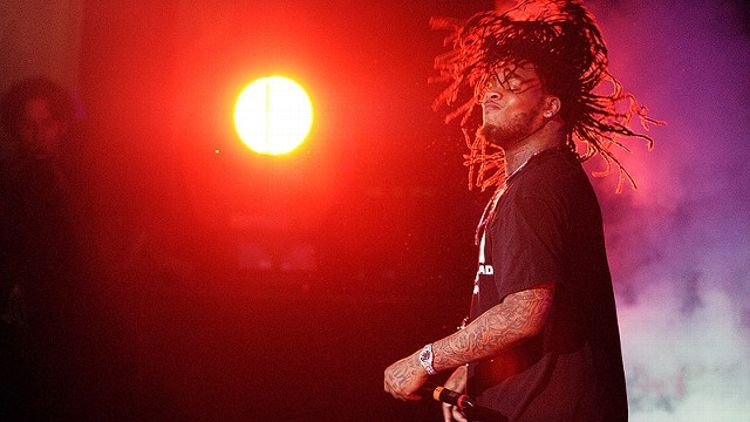 1. Triple F Life is Waka Flocka Flame’s second album, or something like his 352nd if you count mixtapes. In this case, we probably should — 2010’s Flockaveli was supposed to be a mixtape, too, until somebody on Team Waka convinced him it was retail-worthy. This was smart. Flockaveli was a great album because it felt like a mixtape — ragged, performatively surly, unconcerned with things like variety or themes or words or marketing-minded cameo-player recruitment. Only the pixelated oral-sex jam “No Hands,” with Trey Songz Roscoe Dash droning the hook like a man exhorting a Svedka robot to override its gag-reflex circuit, betrayed an awareness of pop radio’s existence.

2. More important, Flockaveli had “Hard in da Paint.” Waka’s second single and his first hit with then-pre-über Lex Luger — whose production of 11 out of 17 tracks gave Flockaveli an album’s cohesion — was a pluperfect distillation of many exciting trends in North American post-crunk fight music, a strip club–parking lot battle hymn that came out of nowhere the way a flying folding chair comes out of nowhere, a doom-metal anthem hooked around a better-build-some-coffins spaghetti-Western death-knell church bell, and the ragingest, churningest song about paint since “Paint It Black.” Conscience-less and unselfconscious IDGAF-ism delivered with enough energy to light the Georgia Dome, “Hard in da Paint” felt like both a mission statement and a promise — the kind rappers usually can’t keep, and never for very long.

3. Flockaveli and “Hard in da Paint” didn’t exactly sell a ton of records, but they helped Waka build a diverse coalition: rap-blogerazzi types, all-caps YouTube commenters, Tyler the Creator, young parents going hard in the mother-helpin’ Prius. He pissed off the right people, too. When Waka dismissed lyrical craftsmanship as unimportant in a satellite-radio interview and Method Man took offense, the ensuing debate pitted not-unreasonable believers in the notion that Rappers Should Probably Be Good At Rapping against post-formalists convinced that there was something utterly and classically hip-hop about Waka’s ability to put even the most inane dick-smack lyric across with nothing but go-dumb force and bellowing charisma. The schism felt generation-gappish; by griping about technical facility, Meth effectively turned Waka into the Sex Pistols.

3-A. And occasionally you got the sense that Waka was actually striving to infuriate; his most punk moment to date is still the talk-sung AutoTune ballad “Magic City,” from last October’s LeBron Flocka James 3, specifically the line “It ain’t my fault I didn’t have to go to school / To see a million dollars / Thank you Pro Tools.” (His second-most punk moment to date is the beginning of “Round of Applause,” where you can hear him crumpling a potato-chip bag and burping and asking someone to go get him an orange soda.)

4. The three F’s, it turns out, stand for Friends, Fans, and Family, rather than something interesting like Fuck you, fuck you, fuck you or Flocka! Flocka! Flocka!; we learn that right away, on “Triple F Life Intro,” a song about friendship, accompanied by some seriously frilly-sleeved piano. I suspect Rowlf the Dog or Biz Markie in the conservatory with the candelabra. One song later, on “Let Them Guns Blam” (featuring the more verbally adroit post-Waka hollerist Meek Mill), there’s some discussion of how “Friends turn to enemies/Enemies turn to friends,” but this one is just about how friends give you “unconditional love.” I may have missed a deep cut on Salute Me or Shoot Me Vol. 3, but I’m pretty sure this is the first appearance of the phrase “unconditional love” in the Waka oeuvre.

5. Waka’s one of the emblematic figures of a moment in which a lot of handed-down ideas about what constitutes “real hip-hop” are crumbling; Drake (about whom more later) is in that category, too, and Nicki Minaj. I like Nicki; I like the Nicki who made “Starships” as much as I like the Nicki who made “Beez in the Trap.” But — and I wish there was a phrase I could preface this with, like “No Rosenberg” — I think we can still have a conversation about whether certain pop moves are necessarily a good look for everybody without falling back on hidebound ideology. There’s nothing inherently morally wrong with rappers making tanning-bed-sunshine club jams like Waka’s Minaj/Flo Rida/Tyga collaboration “Get Low” (not to be confused with Lil Jon’s, although, believe me, that won’t be an issue). But I’m going to go ahead and suggest that maybe there are better uses for Waka’s, um, specialized skill set. Same goes for “Fist Pump,” another smear of dance floor protein-paste, aimed as squarely at juiceheads goin’ gorillas as the title would suggest. I am way more enthusiastic about “Lurkin’,” which features Plies and is about lurkin’.

6. One of the most interesting things about Waka Flocka Flame is that the aggression in his music seems so divorced from actual rage; you never get the sense from any of the songs he makes about shooting guns at people that he actually wants to shoot guns at people. These songs are about shooting people the way this video of fans enjoying themselves during a funeral procession for Waka’s slain Brick Squad colleague Slim Dunkin is about death. This is why it makes sense that he’s down with Tyler the Creator, who operates in a similar zone of abstraction, in which a song about murder is not really a song about murder. There was supposedly going to be a Tyler-produced track on Triple F Life; there isn’t. Maybe Waka recognizes that — at least for the moment — he’ll land Tyler’s fan base no matter what, that the 14 hipsters who think it’s cool when Juicy J works with Spaceghostpurrp and Casey Veggies are an audience he already has in the bag.

7. So, Drake — he’s a crucial and transitional figure just like Waka is, because he’s done for softness what Waka’s done for borderline-incoherent rawness. So the months-old Drake/Waka pairing “Round of Applause” merits inclusion here, I guess, as a strip-club summit between outliers, if for no other reason (and I can’t think of another reason) than because “Round of Applause” is boring — although, when Drake says he’s “throwin’ every President except for Nixon on your ass” I can’t not picture Drake making it rain in a Nixon mask, like James LeGros in Point Break. It’s not even the best song on Triple F Life about making asses clap; that would be “Clap,” which is just preposterous, right down to the “Slap her in her booty / With some money” refrain and the Pink Panther swagger of the beat (produced by DJ Speedy, whom I suspect of having written his own Wikipedia page). Incidentally, it’s directed more at a hypothetical stripper than it is at us, but is there any directive that better distills the overriding sentiment of sophomore rap albums than “Clap for my money?”

8. This record is the sound of Waka Flocka’s money doing handstands and fan-dances and the Dirty Bird, so we’ll clap for it. This record feels like the end of a cycle and not the beginning of a new one. This record feels like a thank-you gift, or an annual report. At least half of it is pretty good, and the absurd “Rooster in my ‘Rari” is better than a lot of people’s whole careers. But I’ll take the less ingratiating goonishness of Waka’s last few mixtapes over this supposedly proper album in a second — particularly Waka Texas Ranger and Luke Skywaka, and not just because they’re called Waka Texas Ranger and Luke Skywaka (although I’d be lying if I said that wasn’t a factor, because dear god, look at these covers) — and I’ll stand on Waka’s momager’s coffee table in a Nixon mask and say that. I’m pretty sure Waka and I have a different idea of where Waka’s career should be going, though, and I’m basically OK with that.

The Robins Return: A Guide to the Lost Footage of Blue Velvet